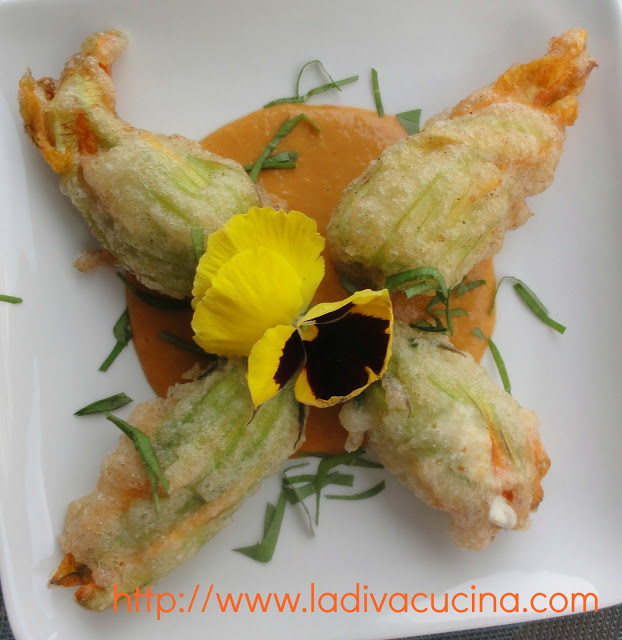 La Diva’s ricotta cheese and basil stuffed zucchini blossoms in tempura batter over tomato coulis!
Darlings!  Well, the months are FLYING BY and it seems like it was only last week that the Creative Cooking Crew picked the theme of creating a one coloured dish! Eeeek!  Here it is, mid-July and I’m up early with my entry for the new theme of
STUFF IT!

And that was the only rule!  And that means a LOT of freedom!   According to the dictionary, “to stuff” means to “cram with food.”   For me, I take that quite literally but some people have different ideas of what “stuffing” actually means to them,  so there is a LOT of room for interpretation, especially amongst the Creative Cooking Crew!

Case in point:  I had just moved back to America from Sydney and was visiting a friend who had just finished culinary school in L.A.  She had just started a food service company where she’d make the meals for the week for certain clients.  Her first and only customer was her neighbor and one day I went with her to see what she’d make for a week’s worth of food.  She told me she was making stuffed pork chops!
Damn, that sounded good!  What would she stuff them with, I wondered?  Apples?  Sage corn meal stuffing?  Mushrooms?
I sat in the kitchen next to the counter and watched her grab a box of Stove Top Stuffing, make it and then schmear it all over the top of regular pork chops that she hastily put into the oven.  THAT was her version of “stuffed” pork chops?   Needless to say, I was highly disappointed in her interpretation and use of pedestrian ingredients, especially since she had boasted about working with Wolfgang Puck in his West Hollywood Restaurant Spago.
Welcome to America, La Diva. 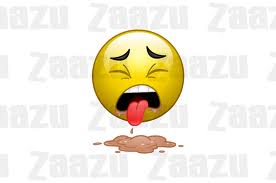 The incident reminded me that back in my home country, especially in Los Angeles, you could find the gourmet along with the processed, the creme de la creme with the crap.   And the irony of a transplanted Midwestern chef choosing to serve a box of processed food for client when she lived in a state with some of the best  produce in the country was not lost on La Diva.  But let’s get back to the topic at hand, STUFF IT!
For my STUFF IT entry, I decided to go back in time to a wonderfully decadent pairing of two of my favorite proteins:  steak and oysters! 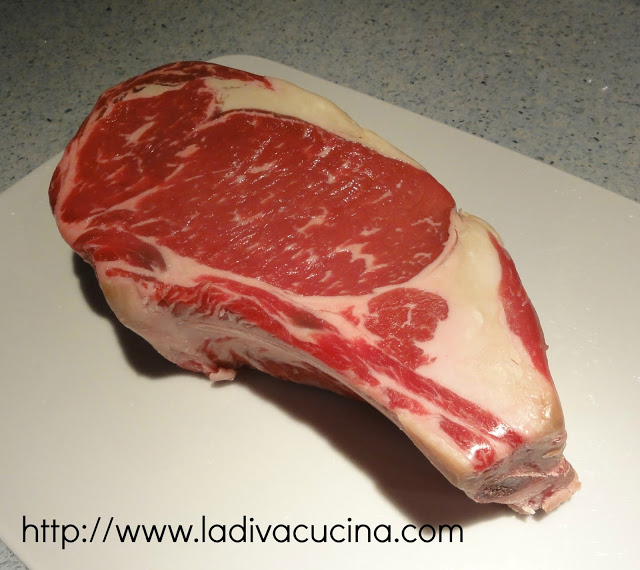 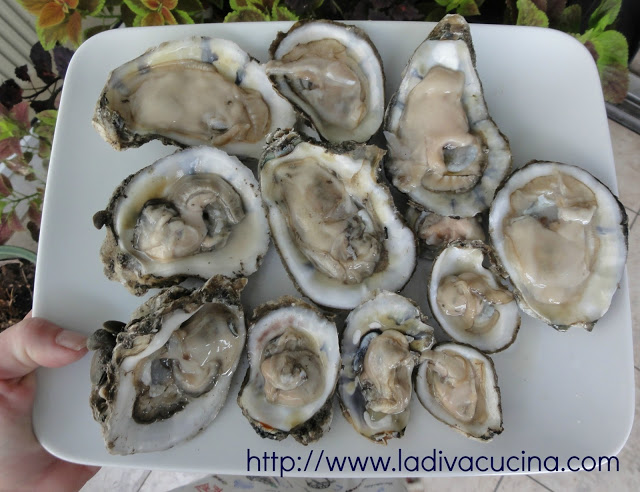 Along with these Florida Gulf oysters, no sense in using Blue Points!  It’s always best to shuck your own oysters right before use.
But Diva, I hear you say….WHAT, PRAY TELL, ARE YOU GOING TO DO WITH THOSE OYSTERS?!
I’M going to stuff them into this bigass piece of meat and make me a good ol’ CARPETBAG STEAK! 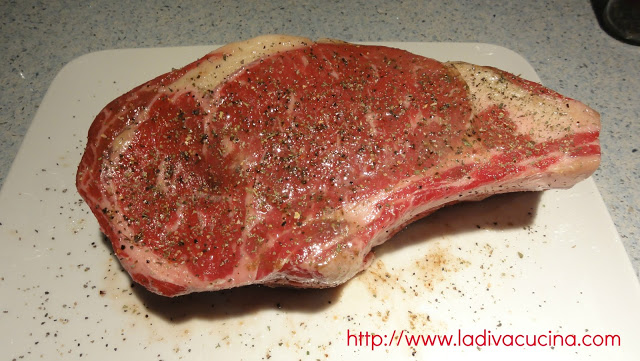 I seasoned the steak with olive oil, salt, freshly ground pepper and my herb and spice mix.
The first and only time I’d eaten a “carpetbag steak” (also known as a carpetbagger steak) was at least 16 years ago when I was with my dear friend, boss and mentor, Carl Blance, who was a restauranteur and a foodie before anyone ever knew what the word was.  He had a gorgeous brasserie in an upscale suburb of Sydney, Australia and I was his cocktail bartender and partner in crime.  Carl and I were always talking food.  When we’d holiday together, Carl would ask me excitedly just after breakfast, “What should we do for lunch?”
The DJ (for my new readers, my husband is DJ Nevah L8 4 dinnah and he sometimes spins at my cooking classes!) and I had been invited to stay with Carl and his partner, Graham, down on the family farm in Berry,  a lovely small rural community about 90 miles south of Sydney. 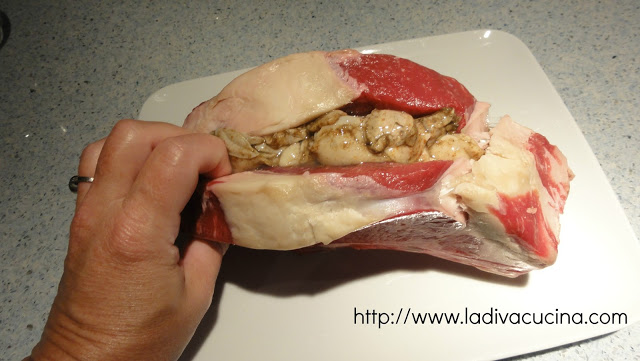 After marinating the whole oysters in worcestershire sauce, fresh lemon juice and a dash of cayenne, I stuff them into a pocket slit into the side of the thick steak.
We had been at the beach all day and we were having a ball, so by the time dinner time came, we were all quite hungry.  We dressed up and headed into town to find dinner and naturally, Carl already had a plan.  Many small towns in Australia have what is called the “Returned Services League” clubs, similar to a Veteran’s club, but the RSLs are much larger and usually have restaurants and poker machines, meat tray raffles and is usually the only source of entertainment (besides the local pub) for many small town folk.
I’ve traveled to many small towns in Australia and have found that the RSL club is a place that literally takes you back in time….by the club’s decor and by the food offered on the menu!  It was at the local Berry RSL (or “rissole” as Aussies like to jokingly call them!) where I’d seen the “Carpetbag Steak” for the first time and  I was intrigued!  I have to admit, I don’t go much for surf and turf as I love the flavor of meat and seafood entirely on their own yet…something about this combo was very appealing to me.
I ordered it. 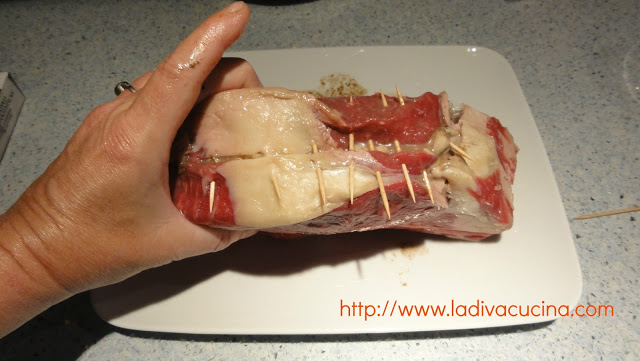 Using toothpicks, I sealed up the slit as best as I could.
The steak came with the usual sides of mash and salad.  I tucked in.  DIVINE.  The briny oyster added a subtle saltiness to the gorgeous Aussie Scotch fillet steak and the flavor was savory and mellow.  From that point on, I was hooked and ate every last bite, telling Carl that “we’d have to give this a try back home!”  But then I promptly forgot about it and never ate it again until like a light bulb above my head, it popped up bright from my memory.   Was dear, daparted Carl giving me a suggestion from the grave?   YES!  I would make the Carpetbag steak for my STUFF IT entry!
There seems to be a lot of discrepancy about when the Carpetbag steak was invented and by whom.  I’ve seen reports of it being served in the late 1800’s,  when the term Carpetbaggers was coined.  Some say the origin of the dish is purely Australian, others say it’s American.  An older gent I was speaking to at the meat counter told me it was none other than Peter Luger who invented the combo as Steak Kilpatrick in the early part of the century, but I think it was  around long before he put his stamp on it.
In Australia, the dish became popular in the 1950’s, so it was oddly typical that I’d found it on the menu in a restaurant in the country RSL and thus, feeling like once again I’d stepped back in time. 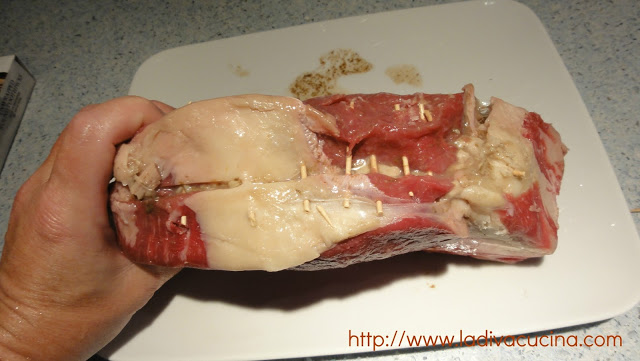 I cut off the sharp points of the protruding toothpicks so they don’t burn on the grill…..so far, so good!
However, I had a problem and a big one.  In fact, I was thinking of scrapping the whole thing and waiting until the next day to make this special dish.   I had over done it the day before and woke up with aching shoulders and back, I didn’t feel like cooking as I was in so much pain and exhausted.   I was so tired that I even took a rare nap on the balcony in the afternoon and was having a very lazy day. (Something this hyper Diva never does!)
But being the Diva that doesn’t like to waste food, and because I wasn’t sure if the oysters would make it in the fridge another day,  I lassoed the DJ into going downstairs to grill it for me. 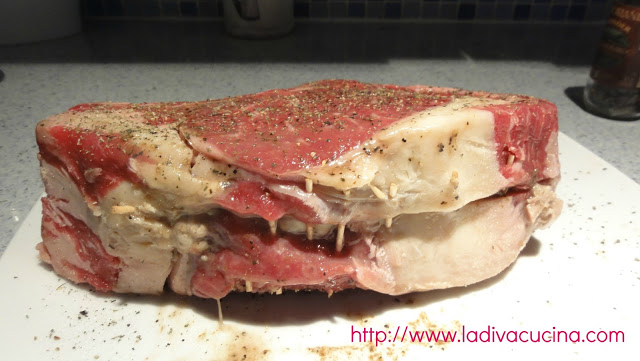 The oyster stuffed steak is ready for the grill!
Looking at the expensive and very thick cut of meat, he was a bit hesitant about his grilling capabilities and told me so.  “You’ll be fine,” I said.  Remember, just sear the outside and then turn it down to let it cook through.  DON’T over cook it, we can always cook it longer.  And don’t burn it, I have to photograph it for my blog!”
It seemed like he was down there forever and I was getting concerned..    And then it bagan to storm and rain buckets when I heard him come through the front door. 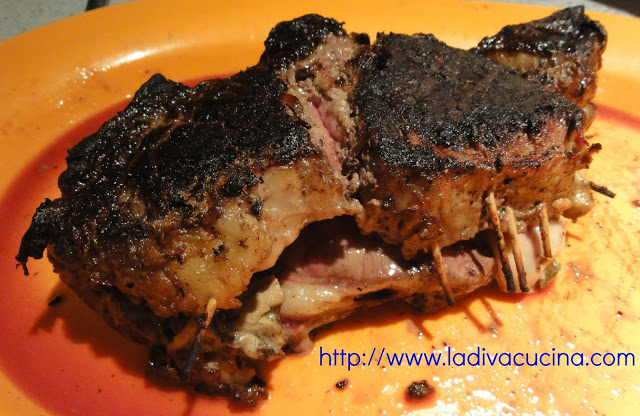 And this is what he brought me.
Hmmmmm…..”Looks a bit charred to me….,” I said.
“The grill was super hot… and the oysters kept falling out!  I lost a few….!,” said The DJ, frowning.
For reals?  Damn.  I couldn’t hide my disappointment. 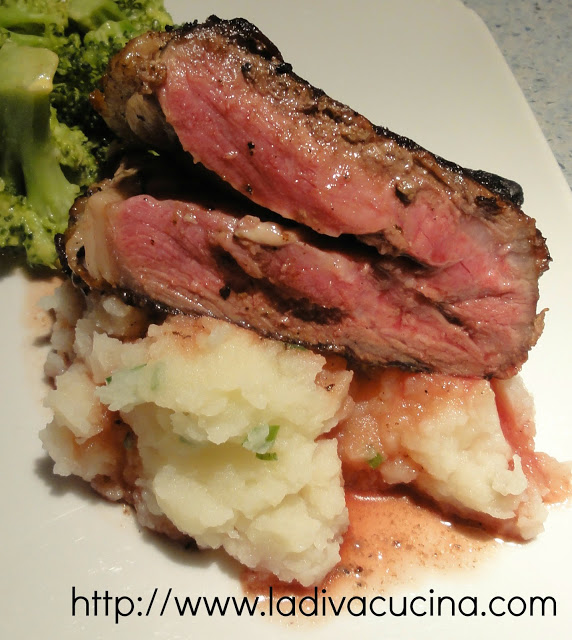 I cut the steak in half, giving him the larger piece with the bone and took the other piece.  It was VERY rare….almost blue.  I usually love my steaks medium rare, but lucky for The DJ that Diva is practically a cavewoman and the bloody meat presented no problem.  I didn’t even mind the charred crust.  I greedily ate it up with my now pink mashed potatoes.
The steak was still pretty tasty, in spite of the uneven cooking, but I knew I should have grilled it myself and it wasn’t fair to be upset with The DJ.  This was “my thing” after all and he was just minding his own business on a Sunday, relaxing and enjoying a glass of red wine.
Losing some of the oysters in the grill meant that I hardly got any in my piece of steak.  So, it really didn’t taste like a Carpebag Steak at all and I felt cheated.
And I was mad.  I had been SO LOOKING forward to it! 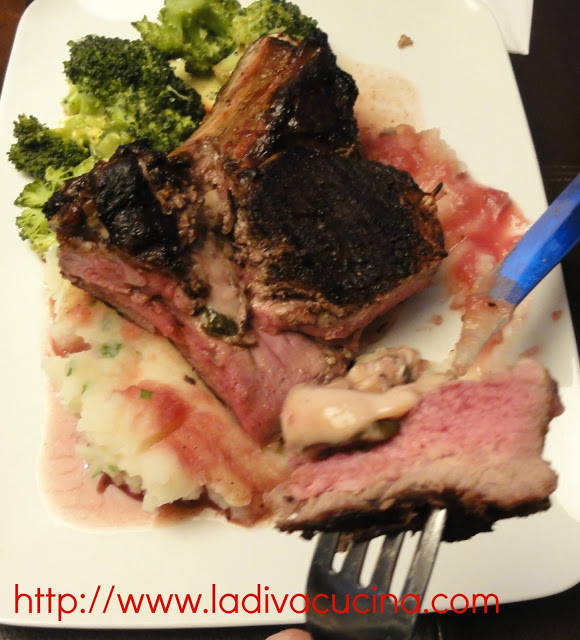 And to make matters worse, most of my photos came out blurry as well!  It just wasn’t meant to be!
So, instead of throwing my husband under the bus about it, I admitted that it was my fault and I should have saved the dinner for me to make myself the next night when I was feeling up to it.  Moral of the story:  Buy more oysters for $4 damn dollars instead of letting a hungry and impatient husband improperly cook an expensive steak.
I could have made this again before the deadline, but Diva is going out of town next week and I sure as hell don’t need to be eating any more steaks in the meantime!
But now I’ve got Carpetbag steak on the brain and I WILL make it again soon, oh yes I will indeed! 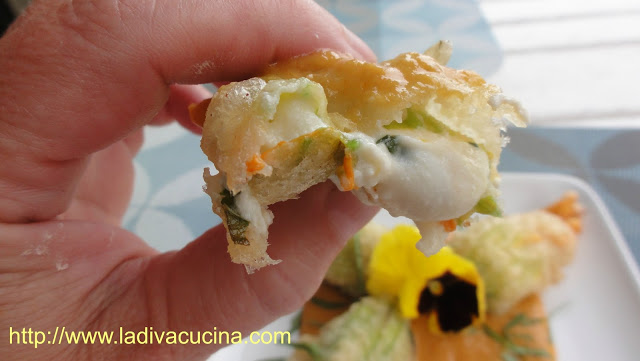 In the meantime, take a look at the steaming inside of my delicate cheese stuffed and fried zucchini blossoms!  Now THOSE turned out perfectly!
I will be posting the round up after the deadline, so make sure you come on back here to see all the uber creative entries!
And do tell, darling, what do YOU like to stuff?  Ciao for now!