La Diva’s falafel photos weren’t quite as appetizing as this photo I found instead (and it looked so damn good and just like how my falafel turned out!)  Enjoy, darlings!
Darlings!  Trips back home to Michigan for La Diva always include loads of good eats and of course, this trip was no exception.   What does a Diva crave back in the “D?”  Well, White Castle Hamburgers, of course, and also something you might not expect:  the most excellent, fresh and authentic Lebanese food.
Syrian/Lebanese Christian immigrants came to Detroit in the late 1800’s, looking for the chance to make $5 an hour at Henry Ford’s factories.  Most of the Lebanese immigrants at the time came from the Mt. Lebanon area and then others followed from the various villages.   Other Arabs came too, including Palestinian/Jordanian, Egyptian, Moroccan and Iraqi (though they like to call themselves “Persian!”)  Many of them settled just outside of Detroit in Dearborn but in the last two decades have spread north into the suburbs of Macomb and Oakland Counties. 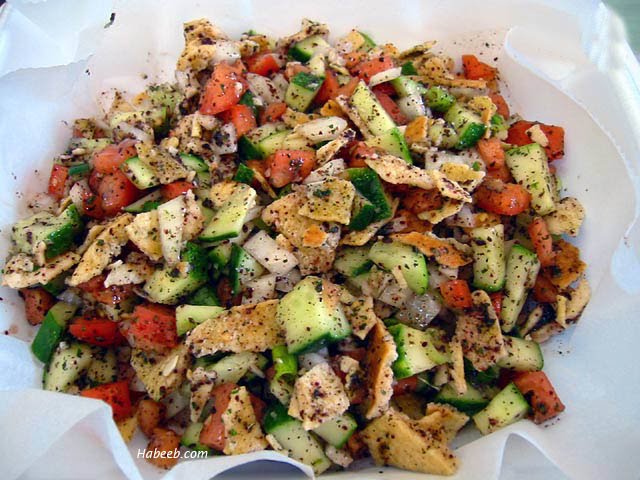 Doesn’t this FATTOUSH salad look excellent and summery?!  I am loving the fiery-colored sumac sprinkled over it, the spice really helps bring out the salads lemon flavors.   Sprinkle some over hummus too. This delicious bread salad is one of Diva’s favorites and so easy to make.  Fattoush salad photo courtesy of Habeeb.com!
Since I had last visited Michigan two years ago, La Diva noticed that amongst all the doughnut and franchise restaurants that littered the generic street, kebab shops had sprouted in almost every strip mall along Van Dyke Ave.  When I lived there as a kid growing up on the East Side, there were only two  Lebanese restaurants outside of Dearborn that mattered,  The Sahara and Emily’s Delicatessen, known for her meat and spinach pies.
It was at the modest Sahara restaurant that La Diva had her first taste of authentic Lebanese food including the usual nutty hummus, tabbouleh salad, fattoush,  kibbe nayeh (raw ground spiced lamb with cracked wheat) and of course, the spicy, garlicy vegetarian falafel.  Eating these foods growing up seemed as normal to La Diva as eating spaghetti.
Having eaten Lebanese only twice while in Detroit  this trip and missing it already, my brother reminded me that a crunchy falafel in a fresh pita with cucumber sauce would make a great Meatless Monday dish.  Of course!  My brother insisted that making falafel with chick pea flour from scratch was the way to go, but darlings, lately I’ve been so pressed for time, La Diva is lucky to even find a moment to blog, let alone hunt down freakin’ chick pea flour.  So, I bought a box mix. It was mighty tasty with the garlic and cumin flavors coming on strong.  Also, the sandwich was a filling, crunchy and flavorful dish for a Meatless Monday!  I served it up with some home-made tabbouleh and a quick cucumber yogurt tahini sauce for a quick and healthy dinner. Thanks for the suggestion, little bro!
If you are looking for recipes to make this home made, browse about the Internets, darling, as the hot tub is calling!  Happy Meatless Monday!
And on a somber note, my heart goes out to my blogging buddies that are suffering from heartfelt loss, dear Boxer and darling Dani.  Kisses and hugs to you both.   RIP Buffalodick, you will be missed by La Diva and your many followers.