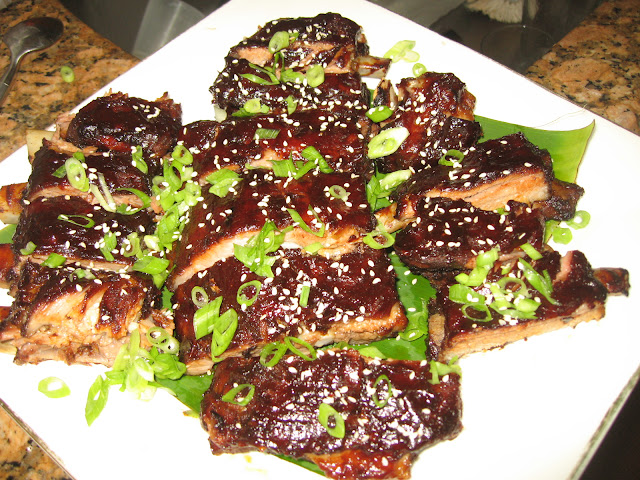 La Diva’s Asian Style Ribs with a Chinese Five Spice Tamarind Glaze
La Diva says:
“After years of learning about people, I have found that if more guests come to the barbecue than I was expecting, it’s best to pull the ribs off the menu.  Because denying ribs to all is so much better than eating rib.  That is more cruel.”
Well, isn’t it?  Ater all, who is satisfied eating JUST ONE RIB?  It’s like eating one french fry.  It CAN’T be done. Or it shouldn’t be done…
I was put in that position over the holiday weekend when I invited a neighbor over for a casual barbecue dinner and then she informed me that “her friends” were coming over and bringing food too.  Her friends included two other women and two teen-age boys.  And Diva only had two slabs of ribs.  Hell, I’d rather cook something else than all of us being unsatisfied with just a rib or two per person!  (and let’s face it, with the DJ and two teen age boys, they could do damage to a slab each!)  So, we saved the ribs for the next night when we could really tuck into them…no one ever knew what they’d missed!
Please enjoy one of my favorite scenes from ‘I’m Gonna Git You, Sucka” with Chris Rock from back in the day!  It’s all about ONE RIB!
When I make barbecue ribs, I usually do one of three kinds:  an all American style, an Asian style and a Latin style.
For the American style, I’ve created a rub with brown and white sugar and spices.  I bake the ribs in the oven on a rack over a bit of water wrapped tightly in foil for about 1.5 hours at 350 degrees or until tender.  Then I grill them and sauce ’em up!  I usually make home made or doctored up natural bbq sauce from the store.  You can cook them the day ahead and then throw them on the grill and glaze the next day.
The second version I make is an Asian style that includes a rub with garlic salt, onion salt, soy sauce, Chinese five spice powder (key ingredient!) and other spices.  Then I make a sauce with tamarind paste, more five spice powder and other ingredients.  I use the same tenderizing method as above.  I tried to link the recipe but it no longer exists on the blog, however, there are many similar recipes.  Just make sure that tamarind and Chinese five spice powder feature in the glaze for the right flavor! 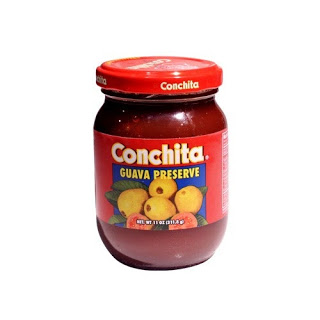 Not jam, not jelly, but preserves!  Guava is a super sweet, tropical fruit with a unique flavor.  The guava features prominently in Latin cooking and is delicious combined with cream cheese in Cuban pastries.
For my Latin ribs, I simply rub them with my American-style rub and then baste the ribs with my guava sauce.   I’ve seen some people marinate them in Cuban mojo marinade first.  You do what you feel is best, as long as the guava sauce can feature in the flava!
I usually do this recipe “to taste,” so you might have to fiddle around with the ingredients to get it to the way YOU like it, but it is divinely decadent with a sweet and spicy taste that really suits pork ribs.
LA DIVA’S GUAVA BARBECUE SAUCE

Put all of the ingredients in a small sauce pan and bring to a boil, reduce heat and simmer until reduced and thick.

Darling, what is YOUR favorite barbecue sauce for ribs?  I’d love to hear all about it!