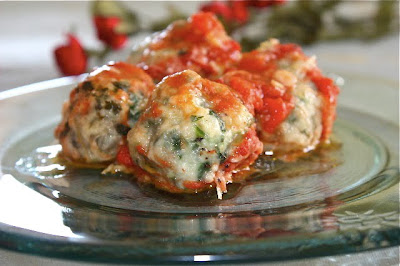 Yummmm…home-made “malfatti” or “badly made” Italian spinach and ricotta dumplings!
Darlings, Karmic Kitchen’s Dim Sum Sunday is back and the theme is Snowdays! The Big Shamu explains: “Do you have a special, warm the kids up after an afternoon of sledding hot chocolate? Do you heed the call of a huge bubbling soup pot? Have you ever made snow cream? Show us.” 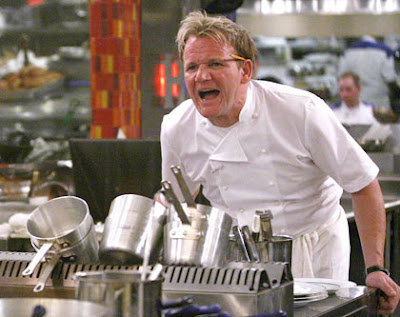 Well, since I’ll be busy at an audition (!) on this Dim Sum Sunday (Jan. 17) I’m posting early. I have a date with Chef Gordon Ramsay and the producers of The Biggest Loser to try out for a new reality show called Master Chef. It’s a contest for amateur chefs only, you can’t work in a professional kitchen or have culinary training and the prize is $100K. I made my video submission on Sunday, have a dish in mind to make and have filled out the lengthy application which includes the question: What do you think of Chef Gordon Ramsay? “He seems intense but I’ve heard he’s nice.” GAH! Hope I don’t get called a DONKEY! haha!
Anyway, I digress! Go to Sham’s DSS link on the right side of my blog page to take you to see what everyone else did on the day! (By the way, what the heck is snow cream? I hope someone made some.)
It just sooo happens that it was the coldest it’s been in decades in Southern Florida and we had temperatures down to the 30’s at night! With that in mind along with the fact that I’m a Midwestern gal from Michigan, it doesn’t take much to prompt me to make some good, comforting food perfect for a snow day. 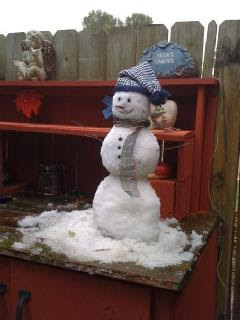 This little snowman was made last weekend by a couple in central Florida. Don’t believe we had snow in Florida? Click on the photo to take you to the story! Sunday had a high of 48 and in the 30’s at night. While driving home on Saturday night, I saw something I’d never seen before. STEAM rising up all over the windy, choppy bay; the water was much warmer than the air!!!
Some of the best snow days of my young life came from the great Blizzard of ’78! (Click HERE to see photos and story!) We lived on a semi-busy road that had frequent cars and our neighbor, Mr. Cavaliere, owned a construction company. After the snow, he came home with a huge bulldozer and plowed our street, putting most of the snow in his front yard. It created a mountain of snow as high as the house! Naturally, a 14-year-old tomboy Diva was out there sledding with her siblings and the neighborhood kids! The Cavaliere kids were the most popular kids on the block all of a sudden and we had ‘free reign’ over the street, as no car drivers were silly enough to venture out. 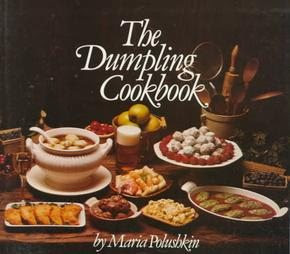 Four reviewers from Amazon gave this cookbook a thumbs up. I had failure with the first recipe but based on this new information, I’m willing to give the book another shot.

Seeing as it’s the first Dim Sum Sunday of the year and it’s sooo chilly out, La Diva decided to do dumplings. After all, what’s more comforting than dumplings? And a type of dim sum IS a dumpling! I found the recipe for the Italian dumpling called “malfatti” in a cookbook a girlfriend had given me months ago. I was looking for new ways to use parsley and dill from my CSA when I came upon this recipe that called for an entire half cup of parsley (good to know!)
The dumplings were made from soft bread crumbs, ricotta and spinach, so I thought that would go perfectly with the roasted tomato sauce I made.
It was a not a quickie recipe. I bought a loaf of Cuban bread the day before and processed it to make the soft crumbs. I cooked the spinach and after it cooled, I squeezed out all the water and then put it into a bowl with the crumbs, egg, cheese and the other ingredients. The directions said to leave in the refrigerator over night and then cook them by dropping into boiling water. Hmmm…seems simple enough and I loved the idea of a spinach and cheese dumpling.
The next day, I heated up the roasted tomato sauce and made the dumplings into oblong shapes about 3 inches long and one inch wide as per the directions. I rolled them in flour and plopped six of them into the boiling water.

And watched in dismay as they all fell apart in front of me. 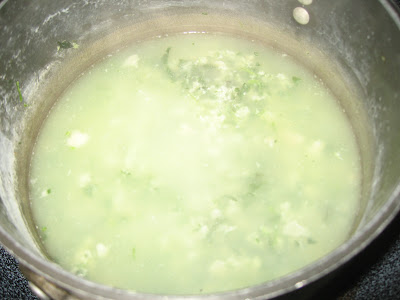 This is what I saw 30 seconds after dropping the dumplings in the boiling water. The directions did not say “gently drop,” they did not say drop into “gently simmering” water but to drop into boiling water to form one layer. I did that. 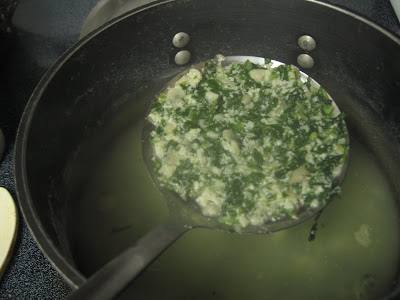 This is my spinach ricotta dumpling or malfatti.
Just then, gal pal Jill calls and I tell her LA DIVA IS MIGHTY AGGRAVATED and what should I do? Especially since the dumplings were going to feed her and her fiance for dinner that night? She quickly and wisely said: Stuff ’em into shells. Ahhh, smart girl. I knew we were friends for a good reason!
And that’s precisely what I did! I still had a good portion of the dumpling dough left, so I cooked the pasta shells, filled them and spooned the sauce over top, grated some parmesan cheese over it all and then baked it in a high oven until bubbling. 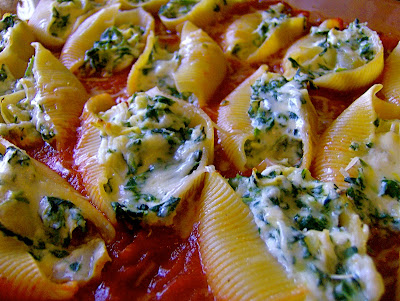 Result: Everyone loved them! I added some grilled Italian sausage and Jill made a fresh green salad and it turned out very well. I think the dumplings cum stuffed shells would have been a tad lighter without the bread crumbs, naturally, but the taste and the texture was still very light, not tough and perfectly satisfying on a very chilly Miami evening.
I find that any baked pasta dish to be incredibly comforting, warming and filling on a cold snowday. Another thing that’s great about making baked pasta in winter is that you heat up the oven, making the house warm and cozy and then have yummy leftovers. Not to mention the welcoming smell that hits you when you finally get inside, all rosy-cheeked and chilled! 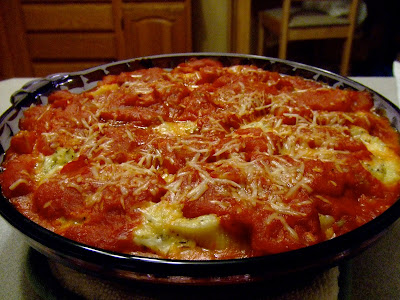 The two pasta photos I found on the Internet. I took the dinner to my friend’s house, along with my camera, but we were all so hungry, we tucked in and forgot to take the photo!

So I bet you are wondering what the ever-frugal-La Diva did with this:

I tasted it. It was salty and tasty with a lot of spinach, cheese and bread crumbs in it. Could it be salvaged? La Diva was up for the challenge and was NOT going to waste half of the ingredients!
The day after the stuffed shells, La Diva bought some ground turkey and low sodium chicken broth. I had an idea. 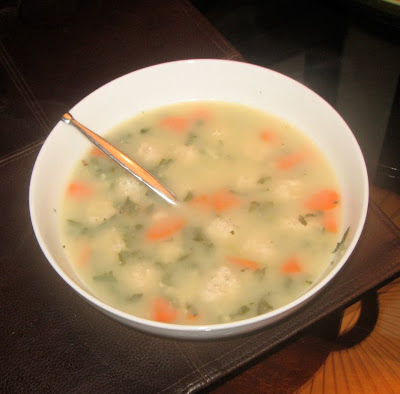 The soup before it thickened up.
I made polpetti (you know, little meat-a-balls!) out of the ground turkey and left over ricotta cheese. I combined chicken broth to the existing dumpling “water” and added some cut carrots. I dropped the uncooked meatballs directly into the simmering broth along with a two generous handfuls of orzo pasta. 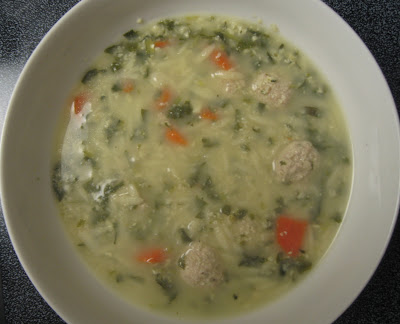 Ten minutes later I had soup. Twenty minutes later, I had THIS soup with a hearty thick texture. The meatballs were so tender and flavorful. DJ Nevah L8 asked for some parmesan cheese but I reminded him about all the cheese already in the broth and in the meatballs. He agreed that I was right, the soup didn’t need it. 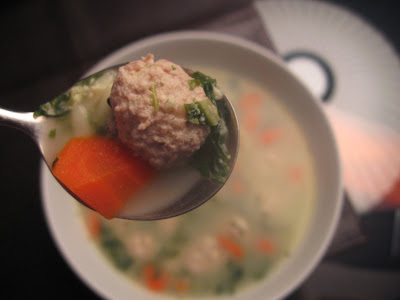 Result: Damn good and satisfying. A hearty soup, especially one with pasta and meatballs, is ALWAYS a good option for a snow day. And La Diva was happy to have salvaged the dumpling disaster without wasting a thing! I find a nice bowl of a hearty soup with substance to be the perfect comfort food after being in the snow or cold. Add some nice warm bread and buttah and the warm-your-insides (and outsides!) meal is complete.
Ciao for now and don’t forget to visit the Great Shamu at Karmic Kitchen this Sunday! Ciao, darlings, ciao!cooking class, cocktails, parties, cocktail party, Miami, coral gables, events, bartending class, cocktail class, Laura Lafata, Miami Beach, miami cooking classes, bachelorette parties, bachelorette party, personal chef, corporate events, catering, personal chef, party entertainment