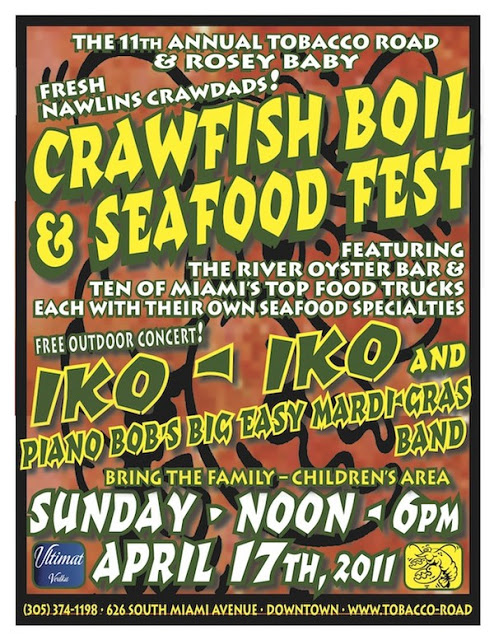 Darlings!  A few weeks ago La Diva and DJ Nevah L8 (4 dinnah!) were itchin’ to get on our bikes and go for a decent ride, at least 10 miles, as it was a stellar Sunday in Miami.   One of our fave Sunday rides is to go to downtown Miami as the weekday traffic is gone and the streets are OURS!  To make the ride more pleasurable, we usually like to ride to an event or outdoor festival, so I checked to see what was happening.  I found that Tobacco Road, established in 1912 and the oldest bar in Miami, was holding its 11th Annual Crawfish Boil.  Tobacco Road and The River Oyster Bar are on South Miami Avenue just west of downtown in Brickell.  They have a huge parking lot out back (with trees!) and is a perfect location for the festival and food trucks. Even though we’d just eaten a large breakfast, the promise of free live music was enticing. 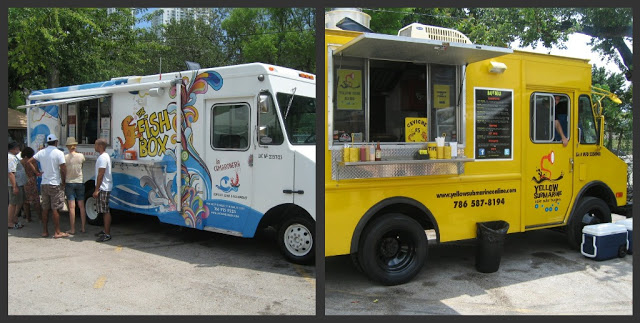 Food trucks are not allowed on Miami Beach and I have yet to go to any of their gatherings off of the beach,  so needless to say, until this day, La Diva has not seen any of the trucks that have been tooling around Miami and feeding the masses!  Today would be my chance to check some of them out.
The Fish Box is the food truck from La Cameronara, a well established local fish market and seafood counter in Little Havana.  They do the usual shrimp and dolphin fish sandwiches but are known for the Minuta, a sandwich served on Cuban rolls and made from ultra-fresh yellowtail snapper that has been boned, lightly breaded and fried with its tail still attached.
Yellow Submarine offers a variety of sandwiches and all of the menu items are named after songs.  And I’ve been told that the hot dogs and hamburgers are served Colombian style.  According to my dear friend Corinna, you’ve not LIVED until you’ve eaten a Colombian hot dog!  You can read more about their menu HERE at Burger Beast’s blog.  This day they were serving ceviche for $5. 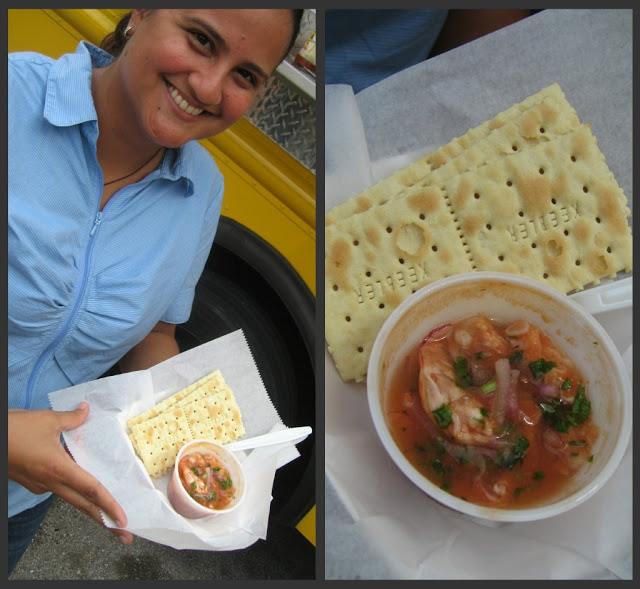 The ceviche was a pretty decent size and a refreshing, low fat option amongst all the fried fare. 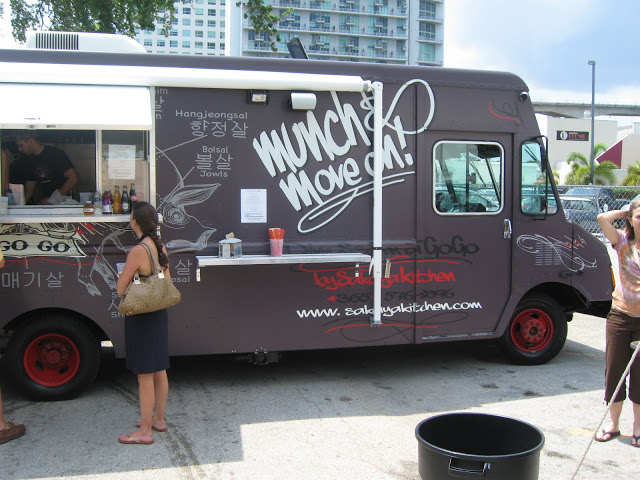 The Sakaya Kitchen is a fave restaurant of La Diva that I don’t get to nearly enough, especially considering how rare good Asian food is here.  The Midtown Miami cafe was started a little over a year ago by Chef Richard Hale.  Hale worked for a while in New York for Chef Jean-Georges Vongerichten and also traveled around Asia and brings a decidedly Korean flavor to his menu.  The accompanying food truck is called Dim Ssam a Gogo which offers more of the same.   Today DSAG was flogging their pork buns stuffed with 8 hour cooked pork, cucumbers and ssamjang sweet chili sauce.  Mmmmmmm…. 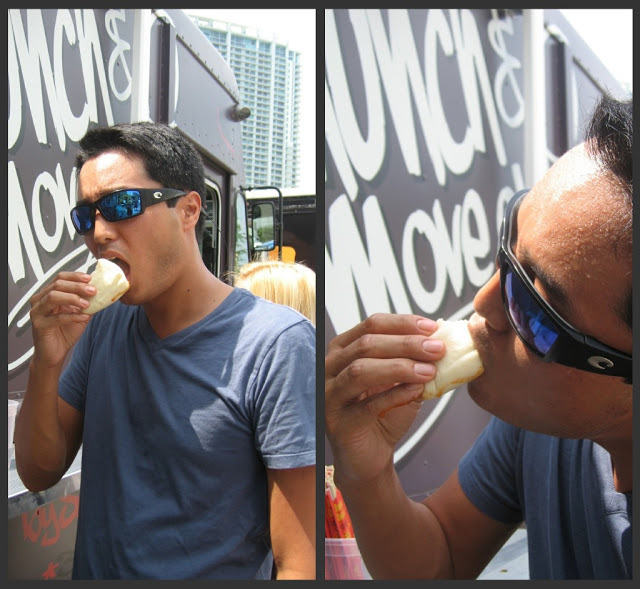 Peter, who works in fish conservation, accommodated La Diva by taking a massive, juice-runnin’-down-the-hand bite of his pork bun. La Diva was tempted to ask him to share! 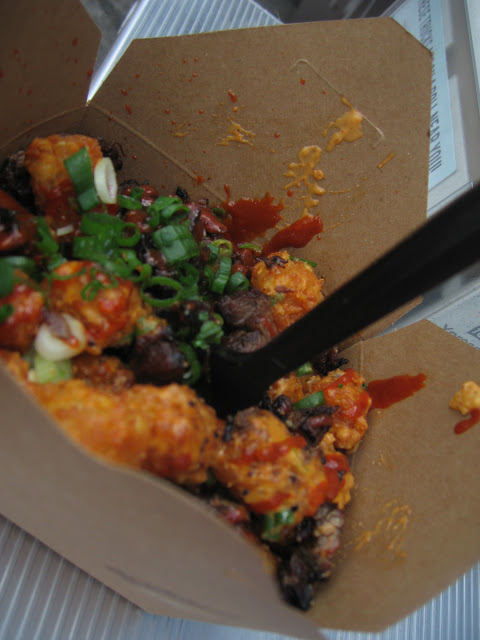 I don’t claim to understand this dish called “Sort of Korean Spicy Tator Tots.”  But I must admit, they DO look tasty!  Crunchy, fried taters with spicy sauce and stuff! 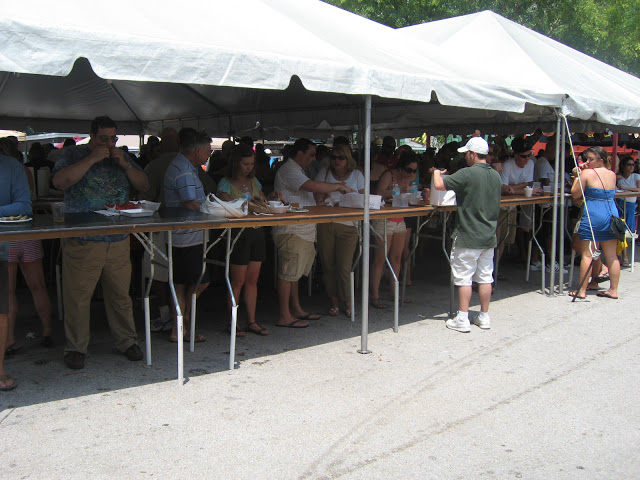 La Diva and the DJ had no idea just how popular crawfish are to Miamians! Standing room only at all of the wooden bench tops and everyone suckin’ heads with a concentrated focus!  Even though both of us were still pretty full from breakfast, the spicy smell of Old Bay seasoning permeated the festival, titillating our noses! 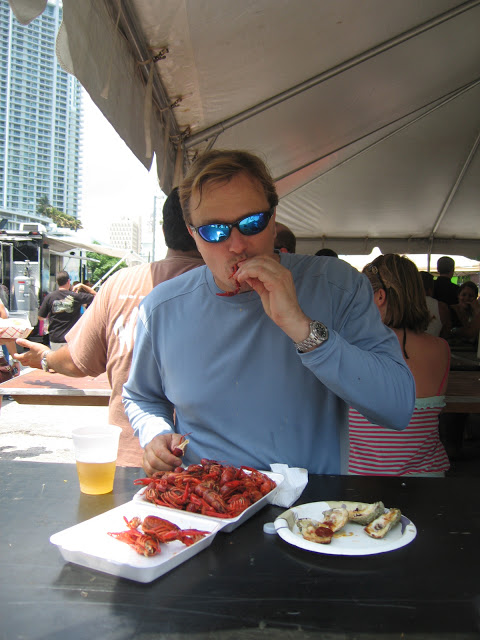 That’s when I spotted Chef David Bracha, my old boss from my first bar job upon landing in Miami:  The River Oyster Bar.   Located just west of downtown Miami, it’s one of the city’s best oyster bars and seafood restaurants and has a huge lunch and happy hour crowd  including mostly professionals from nearby downtown.  Daily oyster selections include malpeque, kumamoto, blue point and gulf oysters.  They also offer ceviche, tiradito, excellent burgers and beautifully fresh fish.

The crawfish were cooked and then loaded into dozens of these insulated coolers, keeping the spicy crustaceans warm and ready.  As fast as the cook could spoon ’em out, they were being sold to hungry customers.  For $15, you got a very generous scoop of the succulent and spicy crawfish. 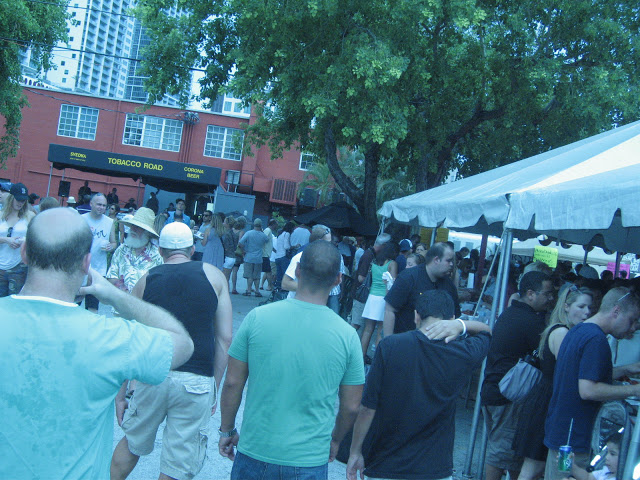 There was a really nice crowd at the crawfish festival and in spite of the numbers, there was plenty of room, food and drink for all to enjoy. 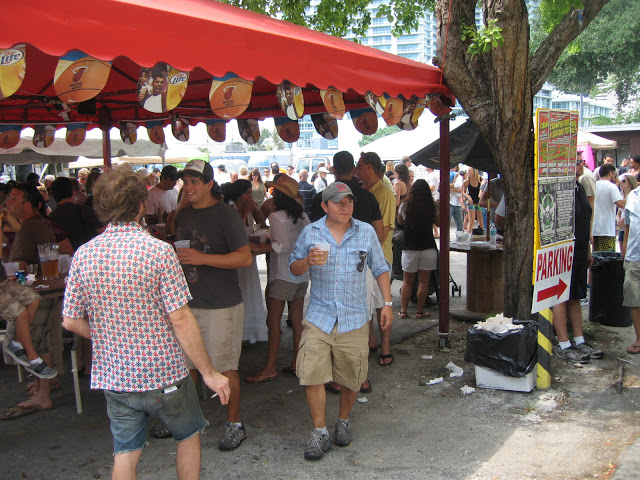 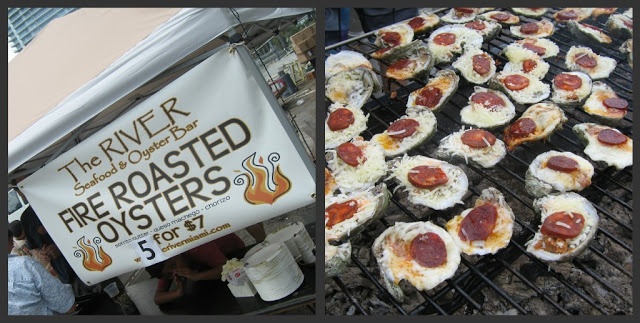 The River Osyter Bar was offering their specialty: fire-roasted oyster with Spanish manchego cheese and chorizo.  I thought they looked delicious but then again as one who really enjoys the delicate flavor of raw oysters was wondering just how much oyster you’d actually taste under all that spice and cheese?  Still, La Diva wouldn’t turn down one if it was put under her delicate nose and was certain I could down an entire plate by myself!  Haha! 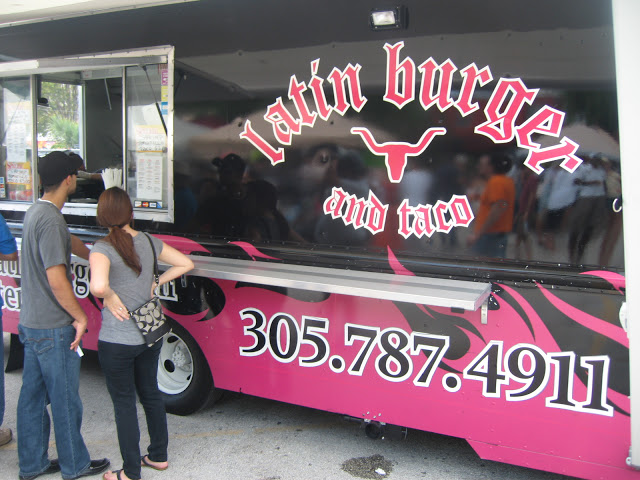 Even though La Diva and the DJ were hanging around the food trucks in order to check out the grub, we were disappointed that we didn’t see a heck of a lot of food coming out.  Most of the food that was being served was put into bags or (gasp!) styrofoam boxes!  Sakaya is one of the few trucks that served food we could see (and they also use recycled and biodegradable materials for plates and serving utensils.)
In the end, this was all just TOO MUCH for my big bear man.  The intoxicating smells of meat grilling and food frying and cheese melting that was wafting through the crowd was  just too tantalizing!  So, instead of succumbing to our primal desires, we cycled home, keeping our diets and calorie consumption in check!
Now that it’s getting warmer in most of the States, I am looking forward to hearing about festivals and food trucks in YOUR area!  DO TELL La Diva all about it, darling!  Ciao for now!