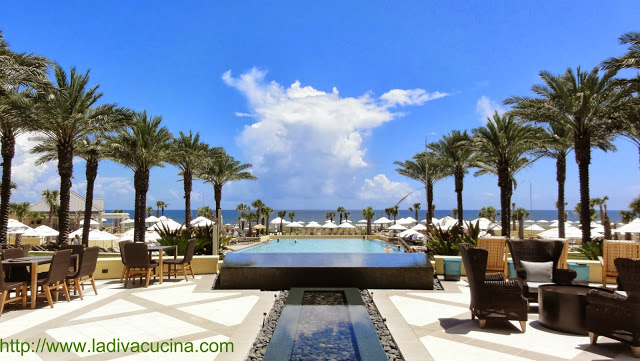 Darlings!  I just love to travel, don’t you?!  Traveling means I get to check out interesting destinations but also I get to enjoy new dining experiences!  Back in August I was invited to attend an industry conference for professional meeting planners at the Omni Plantation Resort on Amelia Island, Florida.  The resort had just undergone an $85 million dollar renovation and I was looking forward to checking out the property, the photos on the website made the property look incredible! 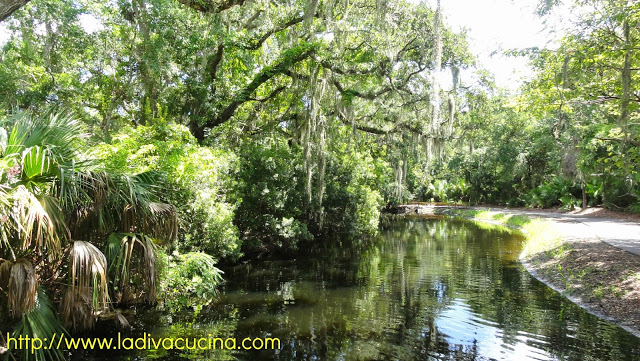 Lush walking and bike paths wove throughout the property and joined the hotel to a cluster of shops and restaurants within the resort, creating an intimate “village” atmosphere.
Amelia Island is BEAUTIFUL and so was the hotel!  Large oak trees draped in Spanish moss evoked images of “the deep South” complete with a genteel and helpful staff eager to please with a ready “Yes, Ma’am!”   Ironically enough, even though Miami is further south than Amelia Island, the city is more like an international city of Latin America than a Southern city of the United States of America.  As the joke goes:  “The great thing about Miami is that it’s so close to the U.S.!”  So, our trip to Amelia Island was a lovely way for La Diva to get a taste of the South and try another “flava!”
My husband A. Felix Pike and his company Media Stage, was onsite as a major sponsor for the event to showcase their amazing video projection mapping services.  At the end of a whole lot of work within five days, we found ourselves at the end of the conference with an entire day to ourselves and one last night at the resort and all the hotel’s amenities for my husband to finally enjoy.  He was exhausted and we wanted EASY, so we went to The Verandah Restaurant on property as part of “The Shops” on the hotel’s property. 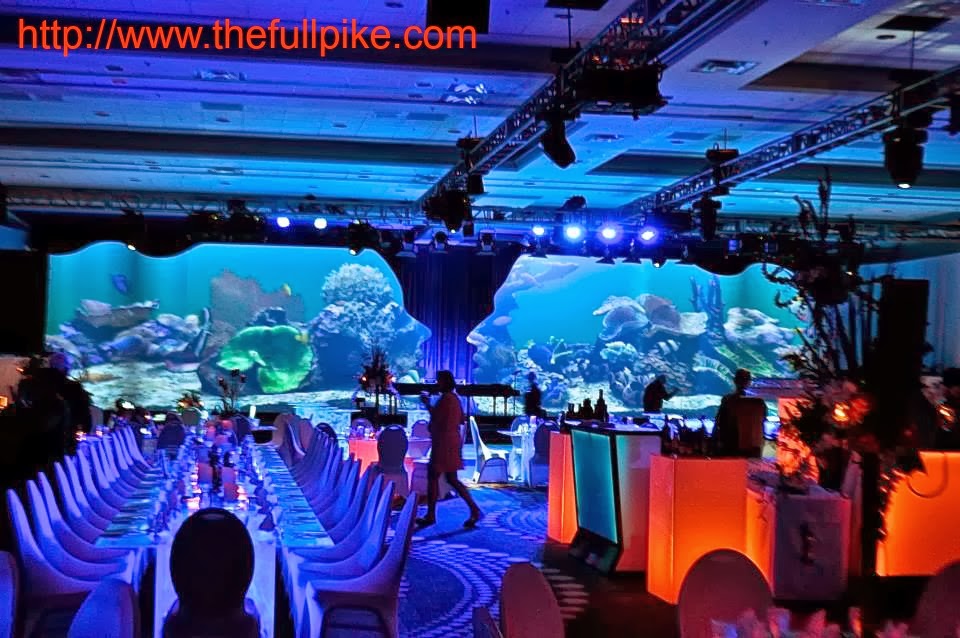 The banquet hall for the gala dinner looked like an underwater fantasy!  The aquatic decor fused with lavish seafood buffet stations and of course, the video projection of fish swimming on the walls, courtesy of Media Stage Productions and their talented crew, added to the ethereal dining experience and stunning ball room.
The Verandah restaurant was described as “specializing in southern inspired fare and fresh traditional seafood, bringing the bounty of the local Atlantic Ocean and neighboring farmers directly to the plates of guests.”  I have to admit, with all the charming staff drawling with their languid accents and the moss-laden trees really got me in the mood for some good ‘ol Southern food.  Without hesitation, I made a reservation.
After a pleasant ten minute walk through the tropical, wooded path, we found The Verandah under a cluster of grand oak trees, adjacent to the tennis courts.  The dining room was decorated in subdued tones of pumice gray and blue, it was sedate, elegant and relaxing.  We ordered a couple of cocktails and looked at the menu.   Our drinks were balanced and well crafted; a perfect start to our dinner. 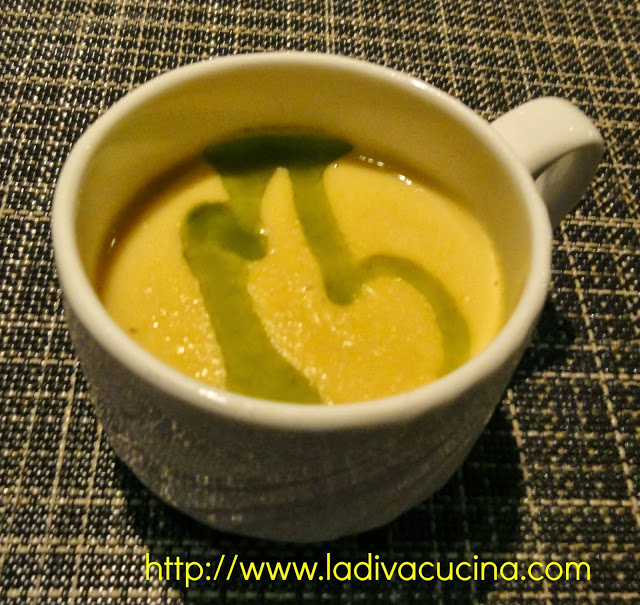 As we pondered the menu, we were offered a lovely little amuse bouche of cream of corn soup lashed with a basil infused oil, it was gorgeous and silky. 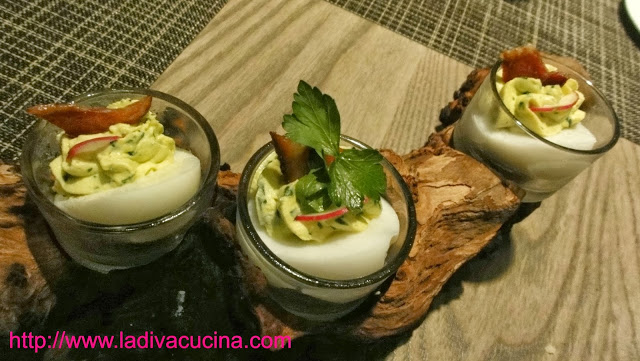 The menu offered so many choices, we had a difficult time making up our minds. Naturally, the menu was loaded with seafood:  a bucket of clams, seafood tower, barbecue shrimp, oysters on the half shell, crab cakes and smoked mullet along with the standard fried green tomatoes and a variety of salads.    But we went with the deviled eggs and pecanwood smoked bacon and the low country oyster chowder, both items we don’t get to eat very often.
The eggs were presented individually in glass tea light holders that had been set into driftwood which was a very beautiful, clever and creative presentation.  The manager told us the chef had constructed the serving pieces himself!  The eggs were delectable with the bright note of parsley and the crunchy saltiness of bacon, a great combination. 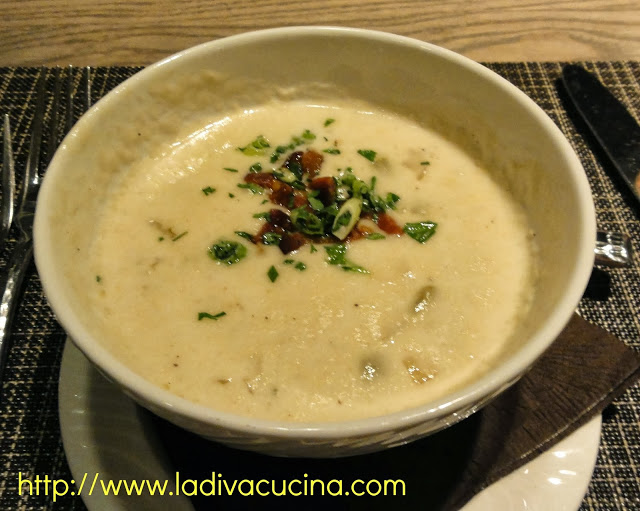 The oyster chowder was not heavy at all, but creamy and packed with small, just-cooked oysters and potatoes.   The crunchy bacon garnish added texture to the velvety soup. 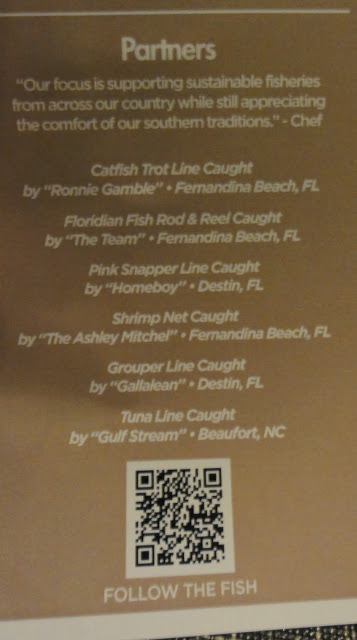 After I asked him myriad questions about the chef’s sources, Nick, our waiter, carefully explained the seafood mains and where the fish had come from.  When the menu says “local”, they MEAN local, right down to the individual fishermen that line caught our meal!  (see above!)  We were also told the produce is farm fresh, local and seasonal.  The only fish that wasn’t completely local was the salmon, it’s South American, but it’s farmed in a way where the fish are not crammed in pens and allowed to catch their own food, not your typical farmed salmon but much cleaner and healthier.
The fact that the chef is so meticulous in sourcing their ingredients, supporting local small fisherman and American businesses is heartwarming.  He is walking the walk and not just talking the talk. 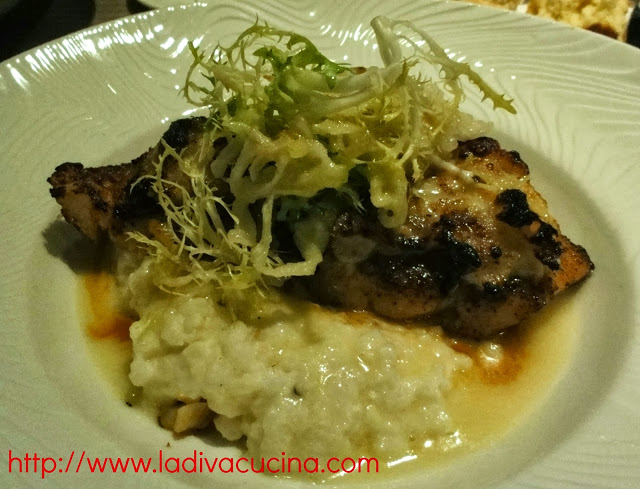 For a main dish, I chose the crab-crusted Florida grouper with a lemon sauce and I opted to have my fish served over the stone ground white grits instead of the whipped potatoes.  The fish was super fresh, delicate and buttery and the hint of lemon sauce didn’t overpower the flavor of the fish, it all worked really well together.  The grits  were divinely seasoned with smoked butter and cooked “al dente” with a texture similar to risotto.  I’ve only eaten grits a few times and had never been a fan, as the ones I’d eaten were always watery, bland and without any character.    But these grits were something I’d never had and made me a fan!    The  texture came from being coarsely ground by stone, from Anson Mills in South Carolina, a company that specializes in native heirloom grains. 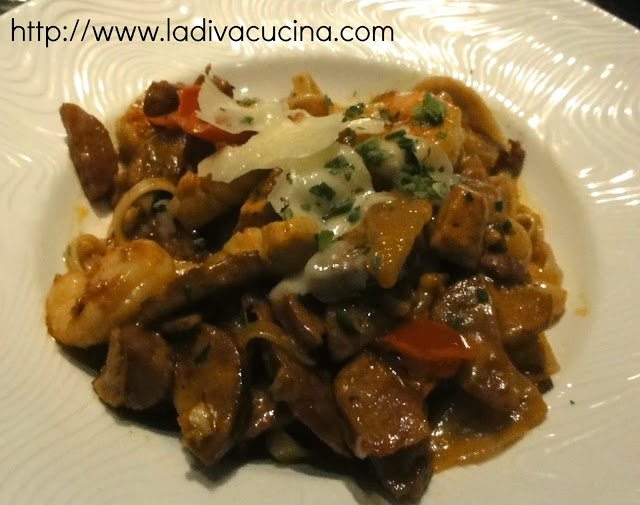 My husband really enjoyed the creamy cajun pasta with mahi mahi, shrimp and andouille sausage, he said there was more seafood than pasta, which is a real rarity in a main seafood pasta dish.  Both entrees were flawless as was the side of farm-fresh grilled Brussels sprouts that we ordered. 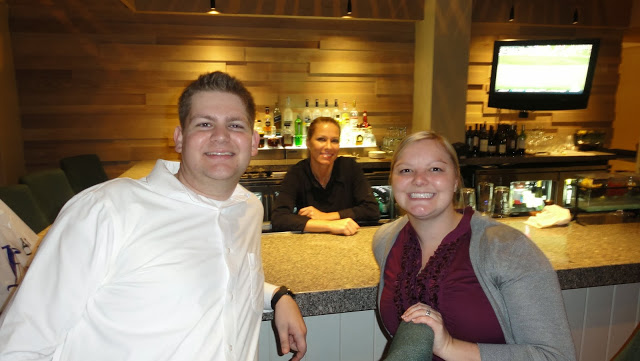 Both Nick, our server, and Emily, the manager, took the time to really talk to us about the menu, where the food was sourced from and the passion in which the staff have tested their recipes before presenting to the public.  They are all truly dedicated to their positions and the restaurant, and as a hospitality veteran, it was very refreshing to see such dedicated employees.  (I think I remember the cocktail bartender’s name was Christine?!)
In spite of us both being satisfied and stuffed, we still but didn’t want to miss out on the old fashioned Southern-style peach cobbler, so we got an order to go with a scoop of bourbon vanilla ice cream.  Everything we ate at The Verandah was delicious, seasoned perfectly and very well presented.  While some people on Yelp had complained about the restaurant being expensive, I found the complaint to be relative, for the restaurant’s prices were a third of the  prices for establishments we go to on South Beach in Miami!  And the quality of the food was spectacular.  I thought it to be worth every penny. 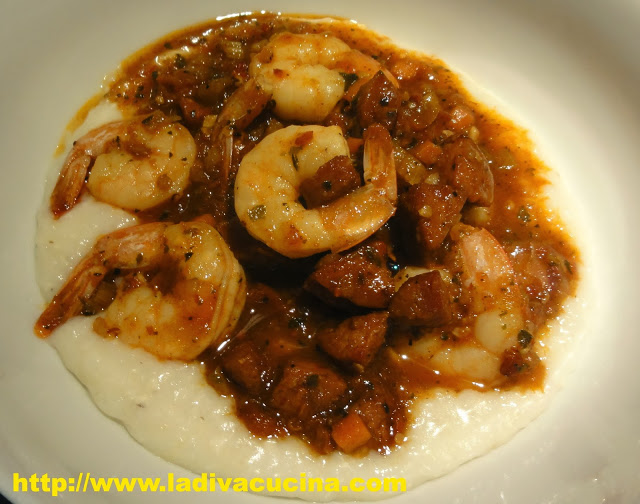 I enjoyed those white stone-ground grits from Anson Mills so much, that I ordered some along with some other heritage grain products from their website.  I served them as a base for my version of jambalaya with andouille sausage and shrimp.  They were just as tasty and full of texture as when I had them at The Verandah!
The Verandah Restaurant is on property at the Omni Amelia Island Plantation Resort and is open to the public.