Darlings, as La Diva slaved away in her kitchen the day before her class last Friday before Superbowl Saturday, my personal deejay and sidekick DJ Nevah L8 also had his hands full producing and emceeing the “Eats, Beats and Cleats” Super Bowl event on Miami Beach’s Lincoln Road mall. Billed as a “celebration of sports” along with food and music, it was voted best Super Bowl party on the beach! 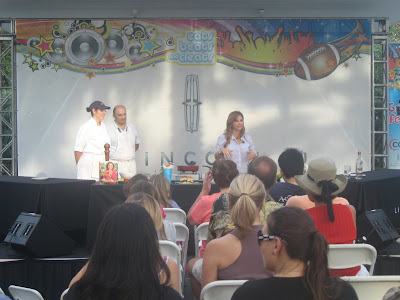 Animated and energetic, Ingrid ‘splains all about turning sliders into scrumptious bites. Nevah L8 told me she was funny and abusing her lazy sous chefs!
HOT local Latina chef Ingrid Hoffman of Food Network’s “Simply Delicioso” was on hand to demonstrate her muy sabroso sliders that she slings in her movable kitchen, the Latin Burger and Taco truck that made its debut in Miami a few months ago. La Diva REALLY wanted to come and see her and hoped to meet her but…. 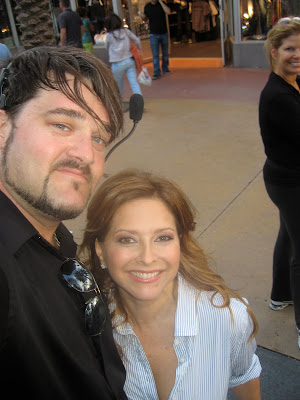 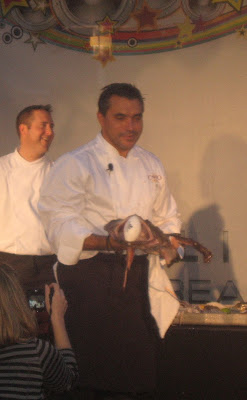 Boston Chef Todd English was on hand after Ingrid to demonstrate a paella of “poor man’s lobster” aka monkfish and then doled it out to the hungry (and most likely drunk!) on-lookers. I have to admit, La Diva has not ever seen his cooking show on PBS OR has watched him flogging his wares on HSN or has eaten at his restaurants, but Nevah L8 told me he was an excellent presenter with a good sense of humor. It was his idea to put the football in the nasty fish’s mouth and kiss it! Brave man. La Diva likes a chef with a good sense of humor. Most of them are sooo up themselves. 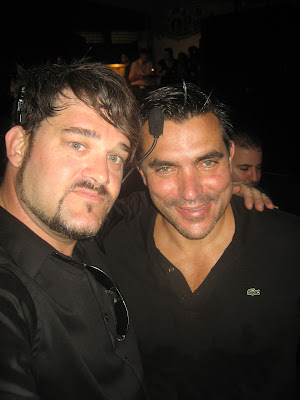 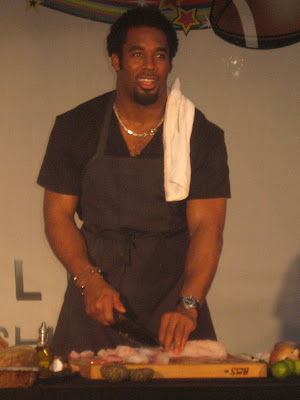 When Nevah L8 called La Diva and said to “get your hiney down here STAT,” I hesitated. I had so much to do. I had to stop cooking. I had to put on make-ups. I had to clean up and change my clothes. And for the fourth time that day, I had to ride my bike up to Lincoln Road, dodging drunken Saints fans all the way, as parking was non-existent.
Half-listening to Nevah L8 as I fried some meatballs for class, I thought I had heard him say that Todd English had asked him “if he was Australian or New Zealand?” Wow, I thought, he didn’t think Nevah L8 was English like most people? Impressed, I chuckled and continued scooping the meatballs.

“I gots too much to do to stop now, I’m up to my ears in Thai meatballs. I’d have to get dolled up and ride my bike up there. Besides, I’ll be exhausted. Can’t do everything.”
Nope, I thought. I’m gonna stay focused. Stick to the plan. Yep. That’s what people do who have their own business. I’M committed.

La Diva plowed on and found I had completed my lengthy prep list only a few hours later. By 7 pm, I was on the couch with a glass of wine. I looked at the clock and thought to myself: “Damn. I think I could have gone up there for a bit…”

DJ Nevah L8 came home about midnight and downloaded the photos. La Diva looked at them dejectedly and said….

“Yeah, I told you. I told you to come down. He wasn’t sure if I was Australian or New Zealand.”

“I thought you said Todd English told you that.”

“Dhani Jones asked me that, he’s a very well-traveled guy. You love him. You know him, he’s on the Travel Channel, he’s an ex-NFL football player for the Bengals.”

I blew it. I love DHANI!! Jones is the star of “Dhani Tackles the Globe,” a series for the Travel Channel in which he learns how to play international sports that are unknown to most Americans. He’s so affable, open and so willing to embrace new things, I was so impressed by him when I watched his show. I really admire him! And he’s so darn handsome. 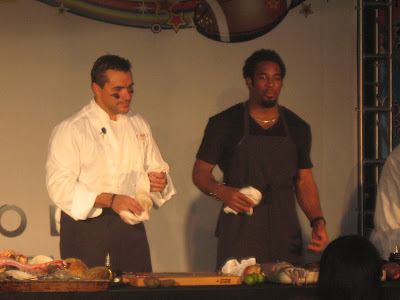 Dahani working as Todd English’s sous chef: You’ve got to be pretty brave to cut up squid and monkfish for anyone. But, Dhani IS a pretty tough guy. I’ve seen his show where he’s training and boxing in Thailand, it’s pretty impressive how good he is at sports he’s never even tried before. 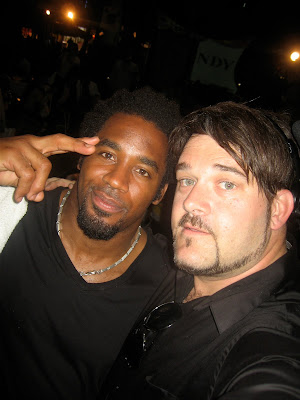 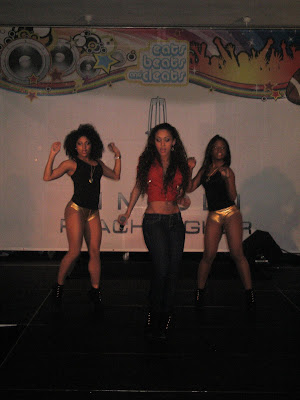 Muy caliente Puerto Rican R & B pop princess Felicia and her gold lame hot pants-sporting back up dancers. Poor hubby. Having to look at this while working. 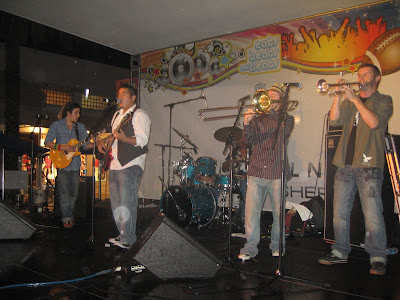 Nothing like a heavy Caribbean dub band with Latin over tones to get the drunken (mostly) Saints fans “dancing!” Araka provided an island vibe for the tourists and fans. Oddly enough, Mike, the guitarist with de dreadlocks, was our CSA host for a brief period!
So, the moral of the story is:

PAY ATTENTION to your husband when he’s trying to tell you something.

Sometimes it’s good to take a break to enjoy yourself and meet people that inspire you.