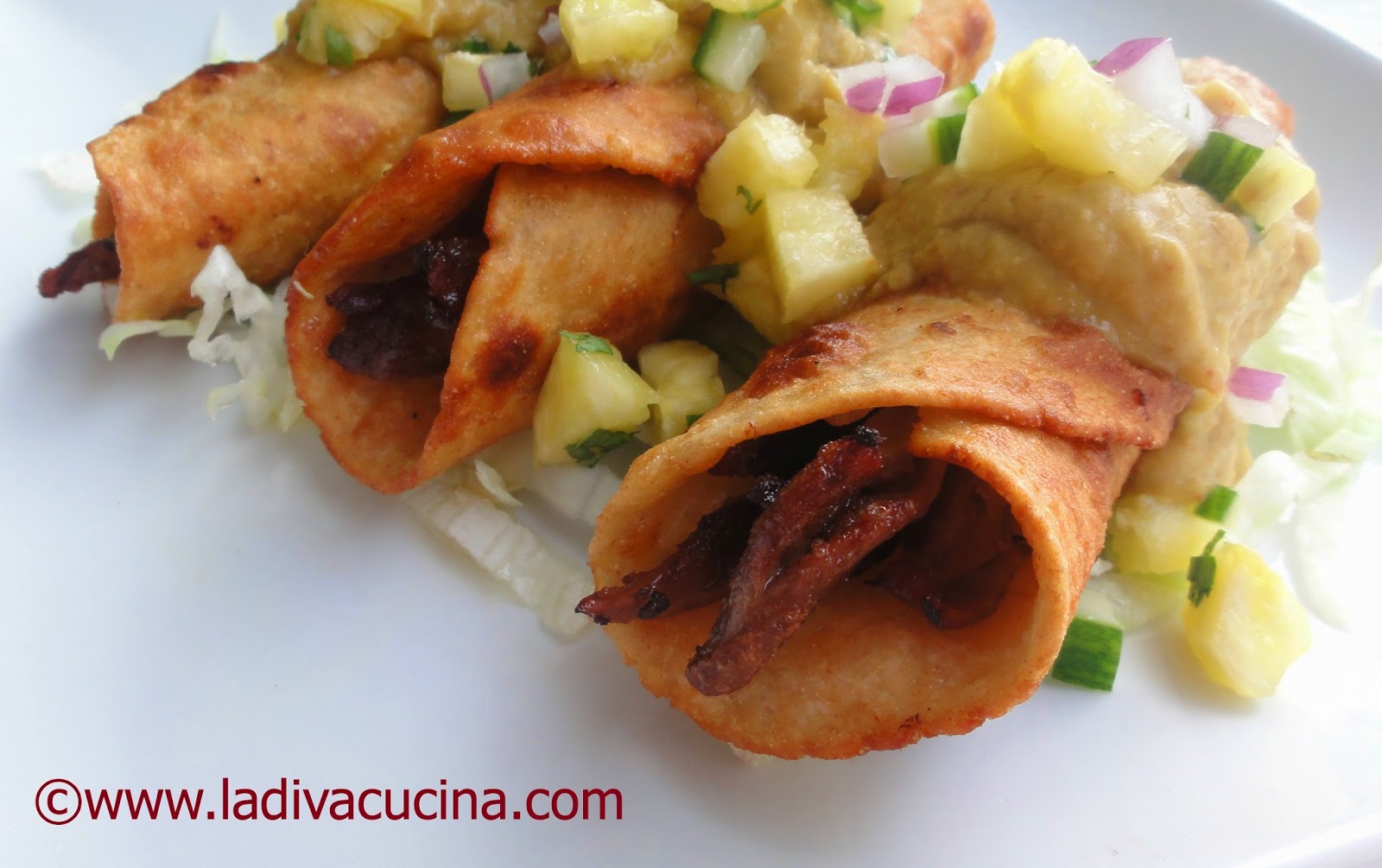 TACO TACO BURRITO BURRITO……You may give me ALL of your taco-flavored kisses!

Darlings, now that the gourmet burger and slider craze has come to an end, the void is quickly being filled by upscale taco joints!  Well, at least it is here on Miami Beach.  Created and run by Texas-native and Haven South Beach executive chef Todd Erickson, Huahua’s Taqueria leads the way with non-traditional taco offerings including a fried chicken taco.  It’s so tasty that the decadent and crispy taco even ended up being featured, along with the restaurant, on The Cooking Channel’s “Taco Trip” with Chef Aaron Sanchez back in April of this year.

And then local celebrity Chef Ralph Pagano launched Naked Taco at the Dream Hotel, serving a variety of unusual gourmet tacos including lamb with mint yogurt and poke tuna with mango salsa and wasabi cream.

Additionally, TeQuiztlan Mexican Restaurant and Tequila Bar, run by the same crew as the now defunct El Rancho Grande,  opened last year offering classic tacos and Mexican fare.  It’s also been reported that yet another taco restaurant will be opening from Menin Hospitality (with Books and Books Chef Bernie Matz) called “Don Diablo,” that is going to offer an amazing street taco concept that will serve late night diners.

Which brings me to this month’s

You guessed it, the taco!

From one of the most bizarre South Park episodes ever where Eric Cartman’s hand is really Jennifer Lopez!

I have to be honest.  I really struggled with this concept because initially I just couldn’t seem to wrap my head around a non-traditional taco.  I’ve been perfecting my skills at cooking traditional tacos like pork carnitas and a divine chicken taco in a home made roasted tomatillo sauce and all I could think of were traditional flavor combinations.  It had all been done before and done very well.

But in time, my idea sprang forth like Wal-Mart shoppers on Black Friday.  I decided to fill the taco with something different, something not usually found in a taco.  That ingredient is DUCK.

But no, it wasn’t enough for me to just make a duck taco, I had to change up the seasoning as well.  I decided to go for an Asian-Mexican fusion for my taco. 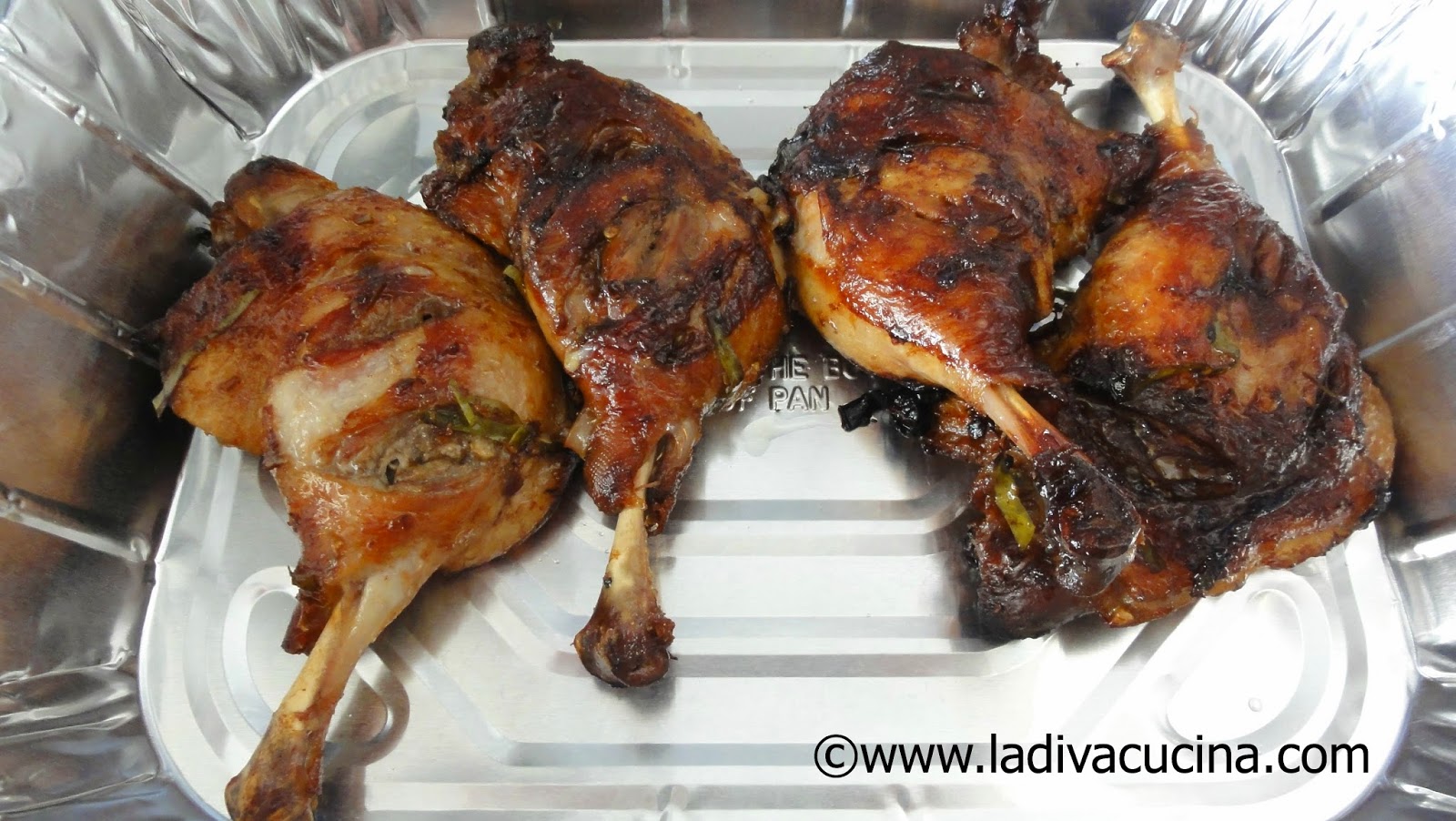 I started off by marinating duck legs with tamarind, ginger, kaffir lime, red chilies, brown sugar and lime juice over night and then roasted until succulent and tender.  I tasted the duck and the flavor was not overpowering, but I could have eaten it all right then and there.  Reeling myself in, I separated the fat and skin leaving only the juicy pieces of meat.

Then I dressed the duck with a dressing of almost all of the same ingredients, heavy on the minced kaffir lime, red chili and a minced serrano chili and stuffed them inside artisanal corn tortillas.  For I was NOT going to make tacos, no amigo, I was going to make taquitos!

<
I really like this brand of tortilla.  One day, I will make my own. One day.

I rolled up all of the duck into the tortillas tightly and secured each with a toothpick.  I ended up with ten taquitos, ready to fry.  Then I made a pineapple salsa with jalapeno, red onion, cilantro and cucumber for a bit of cooling crunch.  (I had planned to put peanuts in and forgot!  DUH!) 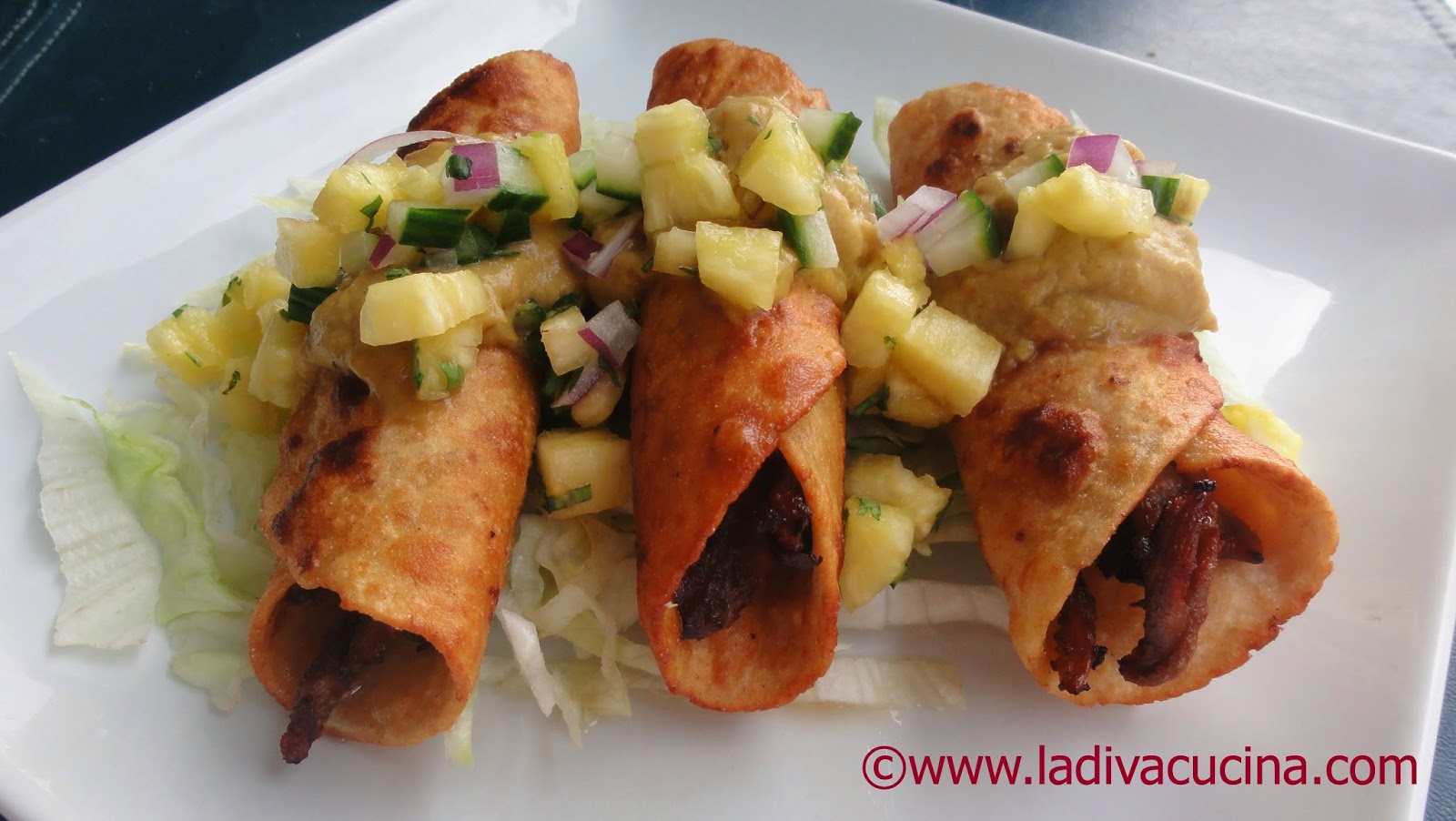 I’d been wondering how to add a creamy element to the dish and thought that a red curry coconut cream would be delightful.  Then I thought, why not indeed add the red curry coconut cream to pureed avocado?  Into the processor went a gorgeous sweet red variety of avocado called a “Hardee.”  I added the sauce and then tested.  O dios mio!  It was gooood.  Smooth, creamy, sweet and a lovely hit of heat from the red curry paste.  But the color?  Not so good.  “Imma gone eat it anyway,” I thought to myself, “fugly or not.”  It was still very tasty. 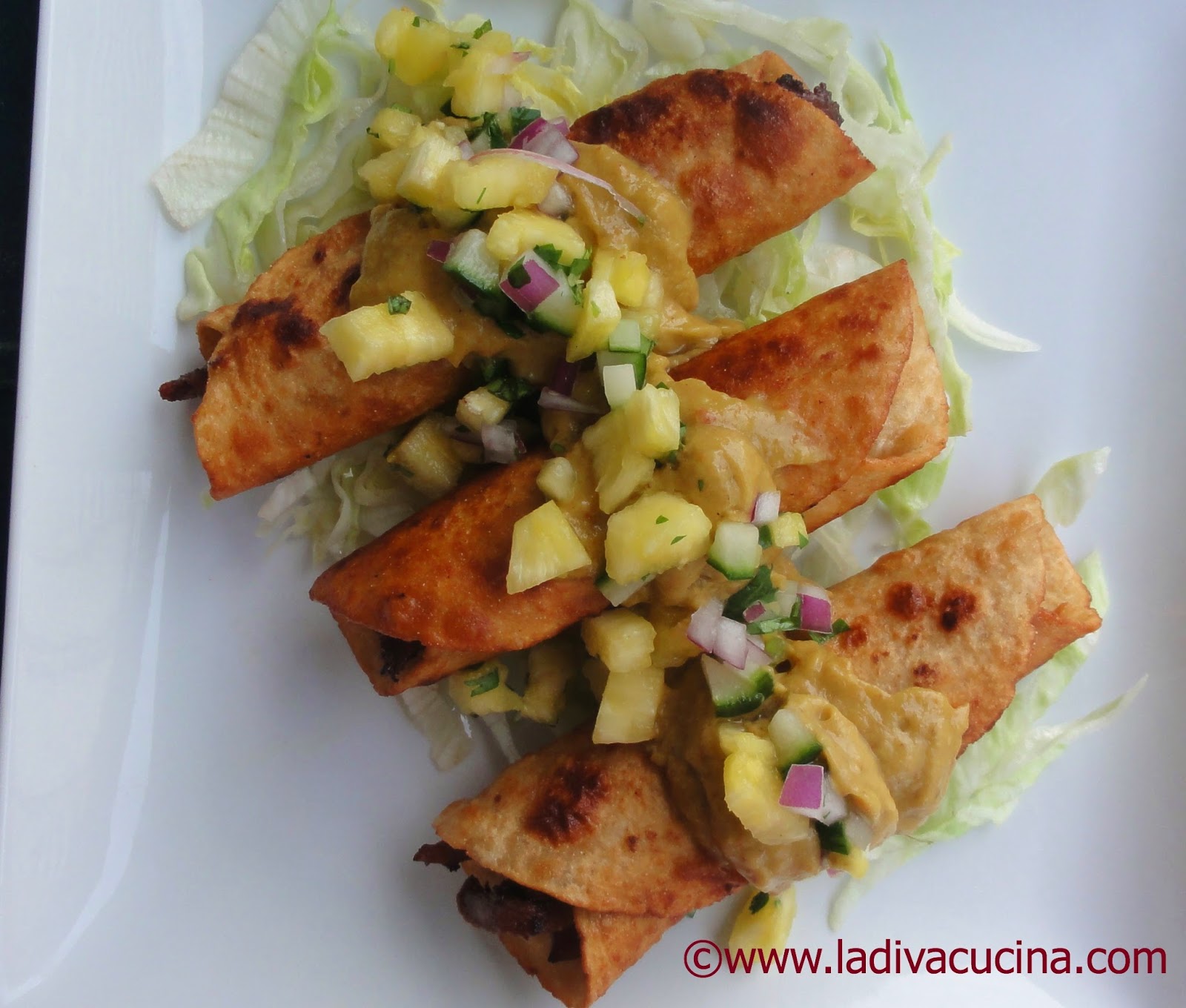 RESULT:  After the first bite, my husband just said “Wow.”  Wow, indeed.  They were good.  But NOT “damn good” and definitely could use some improvement. Mistakes were made and I am not shy about telling you what my mistakes were.  First of all, I was insanely hungry when I made these, so that meant I was impatient.  And, because I was impatient, the oil got too hot and the taquitos browned too quickly.  Though still toothsome, I didn’t quite achieve the crunch of a true taquito.   They were chewy.  I wanted a break-into-a-million-pieces kind of crunch!

Secondly, the pineapple salsa, while refreshing, just missed the mark.  It needed more depth of flavor.  Perhaps that would have come from the crushed toasted peanuts?   A dash of fish sauce?   I think so.

Third, the color of the red curry coconut cream mixed with the pale avocado was unsightly.  Better to forego the addition of the avocado?  NAH.  Actually, this was my favorite part of the dish, so I could live with it.

But lastly, I just wasn’t that thrilled with the duck taquito taste itself.  The roasted duck out of the oven was insanely delicious.  Once I fried them, it seems the flavors got lost and the meat could have just as easily as been from roasted turkey legs.  Duck is too expensive and gorgeous to not be able to discern it’s delectable, gamey flavors.  Next time, I’d forego the taquitos and just use the roasted Thai flavored duck with the red curry avocado cream in a regular corn tortilla.  Truly, when it comes to using high quality ingredients a simple preparation is best.

And what about you, mi querido?  What would YOU have made to take the simple taco to a new level? Tell La Diva all about it!  Here’s the link to the round up of all of the taco entries with the Creative Cooking Crew!