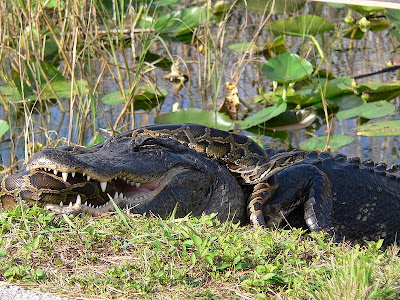 La Diva thinks the ‘gator is winning this round with the Burmese python! Clickety-click to see more snake ‘n’ ‘gator action!
Darlings, as you all know, La Diva loves living in Southern Florida and tries to enjoy all of its natural plenitude. However, I was struck by an interesting story about our fair and balmy land in the Miami Herald this past Monday. It was about Burmese pythons.
Did you know that there are approximately 150,000 of the repitiles in Florida, surviving and thriving mostly in the Everglades? Tossed away like trash from owners no longer able to feed them, plenty a python has found a welcoming new habitat in the swamp and grasslands of Southern Florida. And, like so many other “introduced” species, they have no predators and are spreading and at an alarming rate! 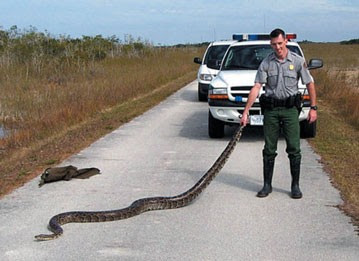 Since the snakes are much too prolific to be captured and culled, what the heck do you do with ’em? Miami Herald reporter Fred Grimm has an idea:

“In the Philippines, they’re rubbed with spices, stuffed with leaves from the palongpong vine and served as cinafa’y feclat.

Cinafa’y feclat not only packs more menu appeal than ”hot roasted python,” it offers a culinary solution to the infestation of giant snakes threatening to overrun, or rather over-slither, South Florida.

And beyond. Apparently, there’s no biological reason keeping Burmese pythons — now copulating in the Everglades like prom dates — from striking out for Disney World and other points north. The U.S. Geological Report concluded that “roughly a third of the contiguous United States lies within the python’s range.”

But I suspect it was the specter of 18-foot baby-gulping constrictors lurking in the pool at the foot of Splash Mountain that prompted state wildlife officials last week to propose paying a bounty for each Burmese python hunters extracted from the Glades.

Unhappily, the state treasury is tapped out. Unless snake hunters can be persuaded to wade into the swamps for discount tickets to the Miss Tallahassee Beauty Pageant, a bounty won’t staunch Florida’s python population. (Now estimated at 150,000, though one wonders who the hell has been slogging around the Everglades counting snakes. We can’t get an accurate count for our human immigrant population in South Florida, yet we’ve got a handle on the number of swamp water creepy crawlies?)

Well-meaning wildlife managers can’t save us from the giant snakes that threaten wading birds, pets, toddlers and Korean SUVs. Chefs, however, can. The restaurant industry has shown it can simply rebrand an unappealing creature and send it the way of the dodo (a huge flightless bird devoured into extinction by human predators with hearty appetites).

Chefs rechristened a once-abundant South American fish with a snaggly grin apt to give children nightmares. Lately, the creature formerly known as Patagonian toothfish has been so overfished that it’s now considered unseemly for high-minded diners to order Chilean sea bass.

A slimehead, as catch of the day, had limited allure. As orange roughy, it’s worth $25.95 a filet. Disgusting little invertebrates that fishermen called (I swear) ”whore eggs” now show up in sushi restaurants as “spicy sea urchin.” 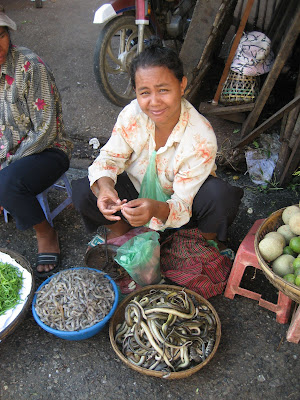 A Cambodian woman sells snakes for snacks at the market…mmm, mmm!

Sea turtles have been pushed to near extinction by misguided males in search of the turtles’ mythical aphrodisiac properties. Surely then, a phallic creature that grows more than 20 feet long can be sold on South Beach as “pan-seared Burmese Viagra.”

Passenger pigeons were once our most common native bird. Until we decided to eat them. By 1914, they were goners.

Pythons can’t even fly. They’d be much easier to fry, broil, bake or sauté into gastric memories.

We’d still have to contend with that other monstrous reptile fast spreading across the Florida peninsula — the Nile monitor. In the Philippines, roasted monitors appear on the menu as cinafa’y fanias.” 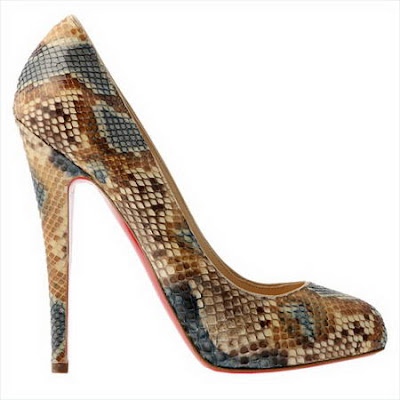 Personally, La Diva LOVES THE IDEA of corralling up the critters for lovely handbags and shoes as you know I certainly don’t believe “it tastes just like chicken!” What do YOU think, darlings? Take a ‘mo and vote!