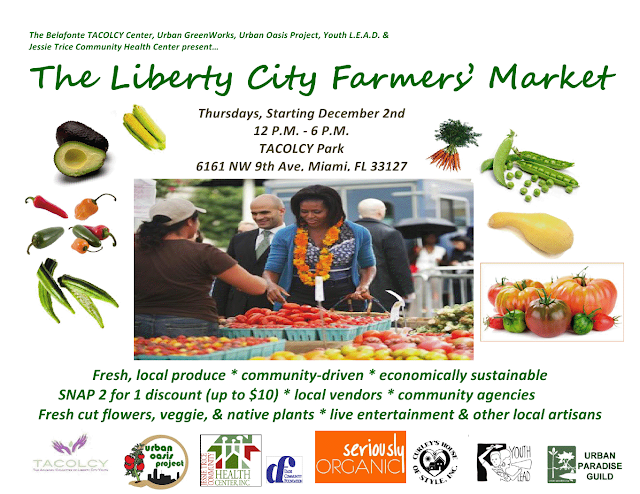 Address for the market is now:   African Heritage Cultural Arts Center 6161 NW 22nd Ave.
Miami, Florida 33142 and runs til the end of May.
Darlings!  Well, as you know, winter is prime time for southern Florida’s growing season and we are  already more than half way through.  This year we’ve seen a fresh spurt of new farmer’s markets which makes supporting our local farmers even more convenient.  Now if I want to have a sleep in on Sunday, I can always go to the Overtown Market for Roots in the City on Wednesdays OR the Liberty City farmer’s market on Thursdays.   And you know La Diva likes choice!
The market is located in Liberty City,  one of the city’s predominate African American communities and was named after a 1930’s housing project, the second of its kind in the South. I had been to the Thursday market once and it was so convenient, I was in and out faster than you can say “crap chain grocery store!”
To help support the market, I posted the link to it via Urban Oasis Project on Facebook and next thing you know, a couple of friends decided to join me, Bradshaw and Corinna, two intelligent, urban hipsters who are incredibly dedicated to the betterment of the city of Miami and its extended community.  But wouldn’t you know it, no sooner did I hang up the phone, a fierce and fast storm blew in with hurricane force!  I called and the market was still on!   La Diva wasn’t worried and fully expected to keep my plans.  As a Miamian, one gets used to these formidable storms that seem to give us their all at once and then quickly spent, quietly go away. After about 20 minutes or so,  it stopped raining sideways, and I got into my car and headed over there to meet my friends, stock up on farm fresh produce and prove once again that Facebook really DOES connect people!

The market has recently moved to the African Heritage Cultural Arts Center and was almost blown away during the gale.  Storm troopers all, the vendors stayed til closing, soaked and with a few tents less, but eager to sell their produce none-the-less.
Antonio and Art man the Urban Oasis table which has organic and non-organic local Florida fruits and vegetables.  I even bought a bag of organic brown rice grown in Florida!
The smiling lad on the end was following me around the market for a while, eager and curious.  I asked him his name and when he told me Giovanni, I quickly quipped, “Ah, you’re Italian,” which sent him into gales of gleeful laughter.

From the Urban Oasis tables and all local:  cucumbers, squash, organic beets, kale and tender romaine lettuce.  Also, there were tropical fruits of papaya, loquat,  strawberries, coconut, sugarcane, passion fruit and banana.  Seen here are the caramel-like sopadilla!  (more on that in a bit!) 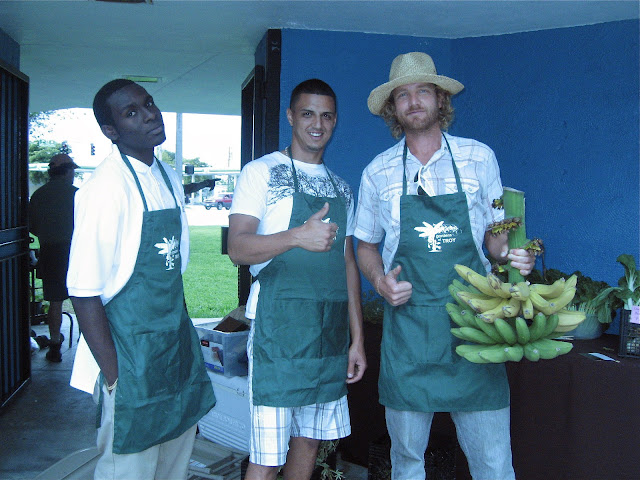 Black man, brown man, white man, BUNCH.  Daylight come and me wan’ go home!  These guys are from Garden of Troy.   Brad, on the far right gets help with the garden from the students of Troy Academy. 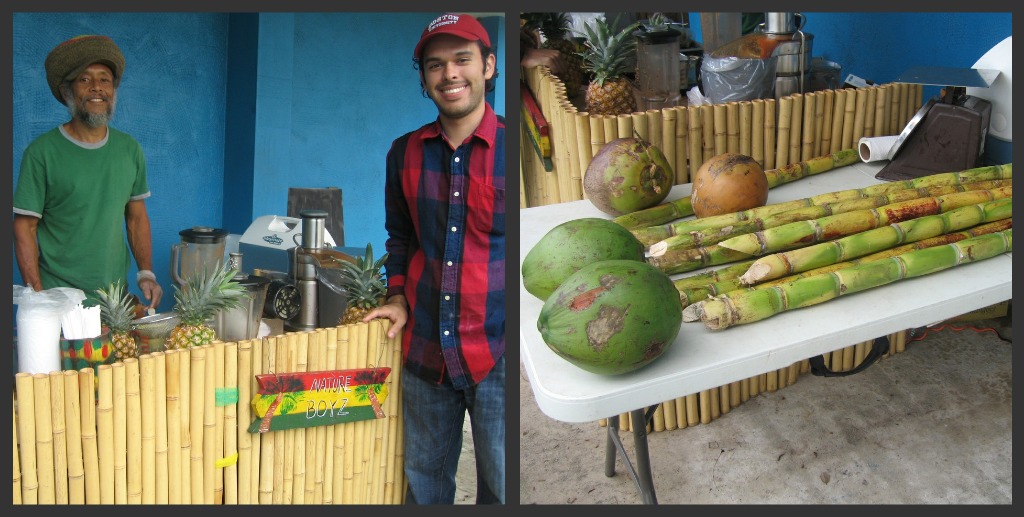 Clive de Nature Boyz’s juice mon!  Antonio came by for a refreshing pick me up.  I get my sugarcane from Clive and he takes out his machete and cuts a huge piece to order….for two bucks!  There is nothing like sucking on a rum-soaked sugar cane spike after your mojito is gone! 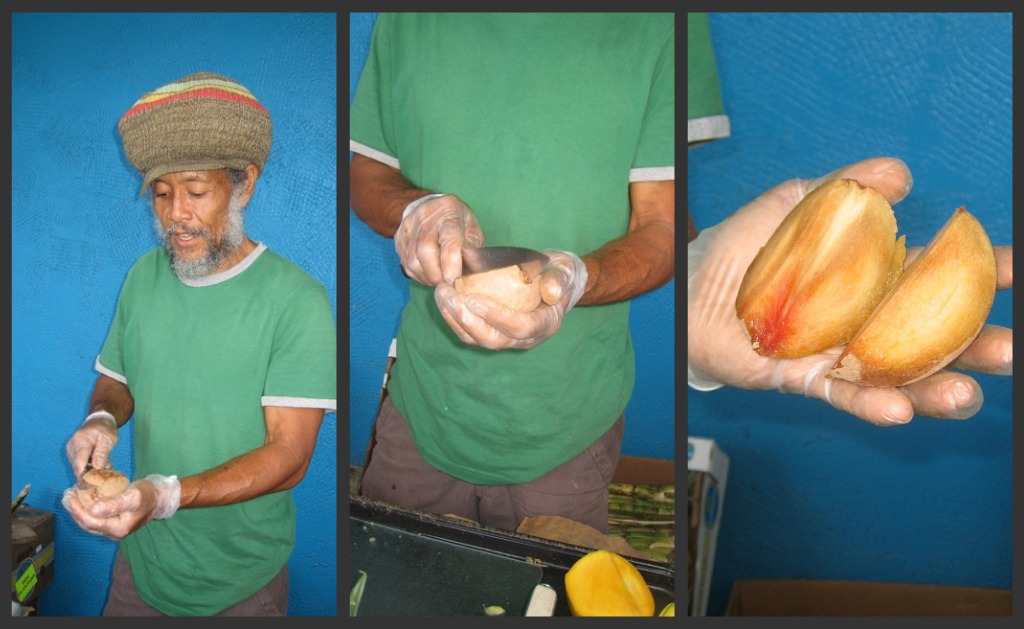 Clive cuts open a sopadilla for La Diva to try.  Super sweet, yep, looks and TASTES like brown sugar, I can see why people describe the taste as “caramel.”  La Diva is hooked! 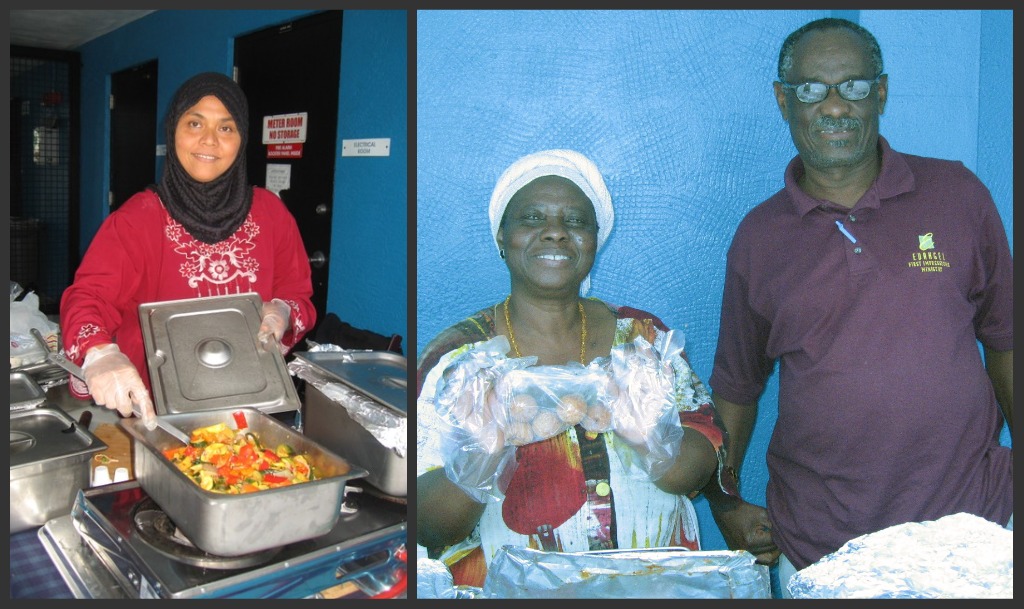 An international crowd was flogging food at the market this day!  We have Eva selling her most DIVINE AND SPICY Indonesian food she described as “nusantara.”  And the lovely Vivian and her husband Jonas were pushing Ghanian doughnuts and other flavorful African fare.  At Bradshaw’s insistence, we could only partake in small samples, as he promised plates of Southern Florida’s best “fried scrimpy” for lunch.  We headed to Jumbo’s in anticipation, stomachs rumbling. 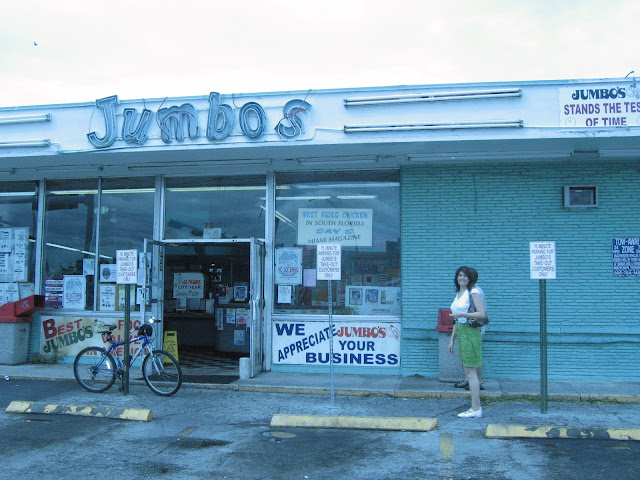 A Miami institution since 1955 and known for their fried shrimp, third-generation Miamian Bradshaw told me his parents used to come to Jumbo’s for their dates back in the day!  I was surprised to find this joint was a James Beard award winner AND has it’s own day issued by the mayor of Miami!  (That would be January 8!)  Take a look at this really interesting video about the restaurant by clicking HERE.
I was SO HAPPY that Bradshaw introduced me to this classic fish shack!  And Corinna was pretty excited too!  If you want some kitschy atmosphere to go along with your fried shrimp and soul food, head over to Jumbo’s in da hood. 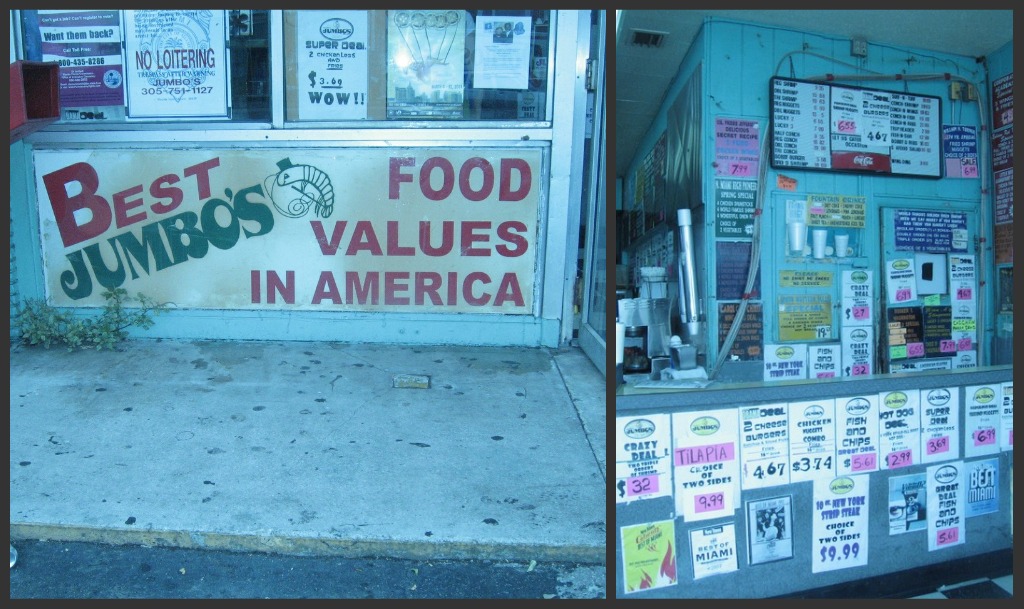 Ya gots to love these signs, Jumbos just SCREAMS character! 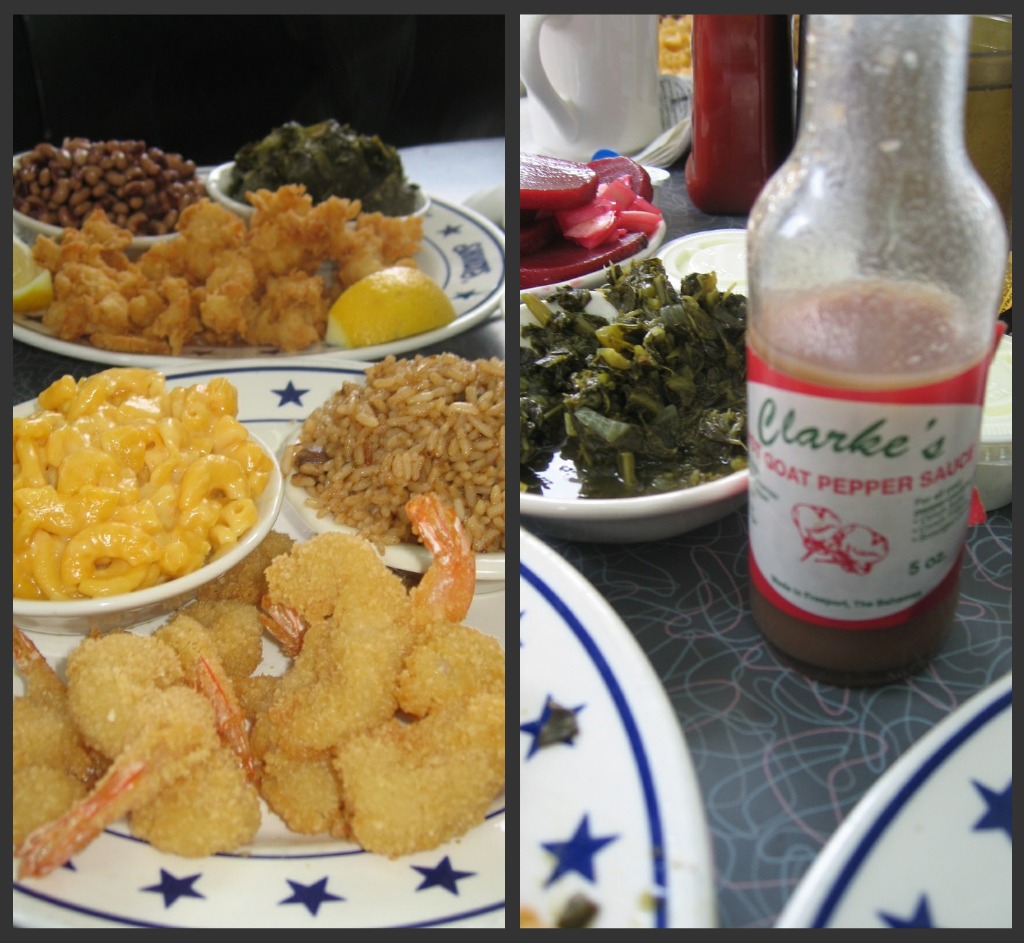 Black-eyed peas, collard greens and battered, fried conch on the back plate and macaroni and cheese, rice and beans and Jumbo’s classic fried shrimp with a beet salad for Brad.  The fried fare came with two sides each so we ordered two plates and had plenty for three people and at $24, it was a BARGAIN.  Bradshaw brought his own Jamaican hot sauce for the fried conch and both were delicious.
Stuffed with the crunchy, fried goodness that is known as Jumbos and satiated by great conversation, a happy, produce-laden La Diva made her way home, grateful for the cultural diversity in Miami and my good friends that shared it with me! Ciao for now, darlings!