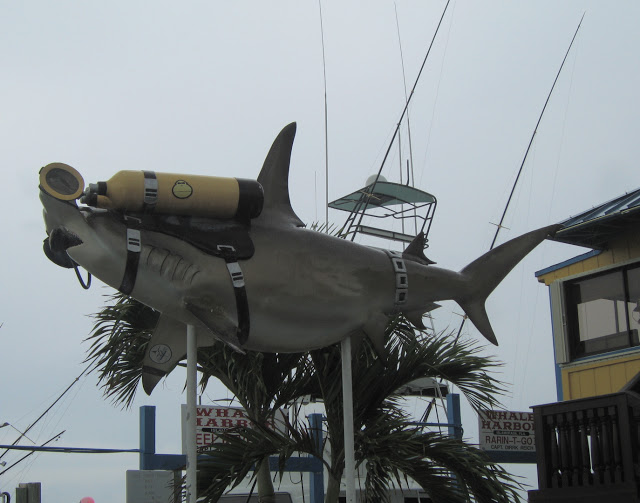 Darlings!  La Diva woke up on Day Two of her fabulous STAYcation in the Florida Keys to a dismal, dark and dreary day of drizzle! A morning snorkeling trip was definitely out, so leaving the Big Bear Man to slumber on,  La Diva took off in search of REAL coffee instead of the insipid dishwater being offered for free in the hotel’s lobby.
The lovely front desk staff directed me to the Midway Cafe “just down the street” and I headed out into the rain.  I drove.  And drove….and noticed a woman sweeping up fallen leaves in front of a row of charming art galleries.  I stopped to ask her where the heck the cafe was, La Diva was getting desperate for her caffeine fix.  She told me I was close, only a few blocks away, and I made a mental note to come back and check the galleries out after I picked up the DJ. 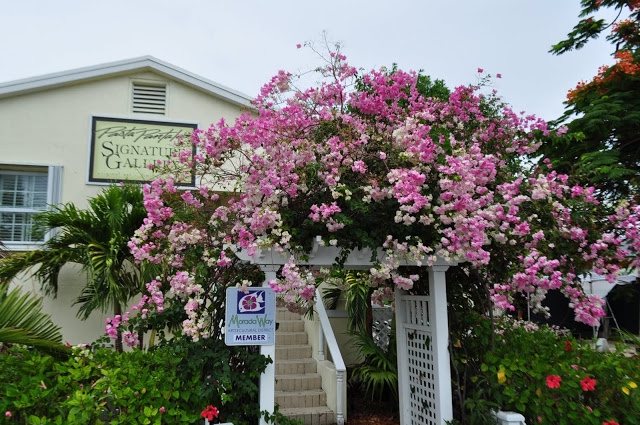 Tired of driving, La Diva decided a lovely walk to the galleries was in order, so we headed  out in the light, warm rain up the Old Highway.  The first shop along the way was called The Wild Lily and it had unusual and beautiful clothes and the most divine original jewelry.  Owner Susan Durner has exquisite taste and yes, La Diva DID end up with a very fetching tropical beach cover up!  The DJ was eager for me to purchase something gorgeous and  was ever so patient…which is unheard of, I NEVER torture the Big Bear Man by taking him clothes shopping with me.  But, the Keys will do that to you, you are not in a hurry to do anything or go anywhere.  (and if you are, you better SLOOOOOW DOWN!)
We went to a few more galleries but I found The Gallery Morada had simply gorgeous, unique home furnishings and one-of-a-kind artisan pieces including beautifully intricate shell wall hangings that were exquisite and delicate, not your usual scallop shell picture frame.   I wish the DJ would have taken photos, but it would have seemed a bit rude, even though the shop keeper Carol was lovely.
By now La Diva and the DJ were getting a bit peckish and we decided it was high time for some lunch.  Carole at the Gallery Morada suggested we avoid the tourist traps and go to Ma’s Fish Camp.  She raved about the fresh fish but also about Ma’s home made desserts that were made on premise fresh daily.  The DJ started off with an order of conch fritters and they were the tastiest, fluffiest conch fritter I’ve eaten!  Slightly spicy with bits of conch that was NOT rubbery, we couldn’t wait for our mains! 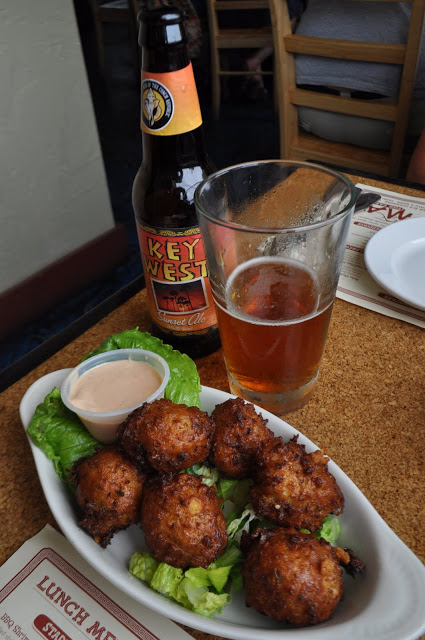 Southern Florida is known for its seafood and in the Keys in particular, and on menus every where, you’ll find  an abundance of fresh dolphin fish (mahi mahi), grouper, conch (in soup and fritters) Florida stone crab and lobster (when in season) Key West pink shrimp, and of course, Key limes.  These are Ma’s Fish Camp conch fritters, hot and spicy.
La Diva started with a cup of the spicy conch chowder, tasty,  hot and satisfying,  and  then ordered a mahi Reuben which consisted of a super fresh blackened dolphin fish fillet on toasted rye with spicy slaw and remoulade.   I took my first bite…oh hell yeah.  It was so good that I wouldn’t stop eating it to let the DJ take a photo!  The DJ got the house  sammie…a nice grilled fillet of dolphin fish on toasted sourdough bread with cheese, tomato and mayo.   The sandwiches were so fresh that we both had juice running down our hands, definitely two napkin sandwich. 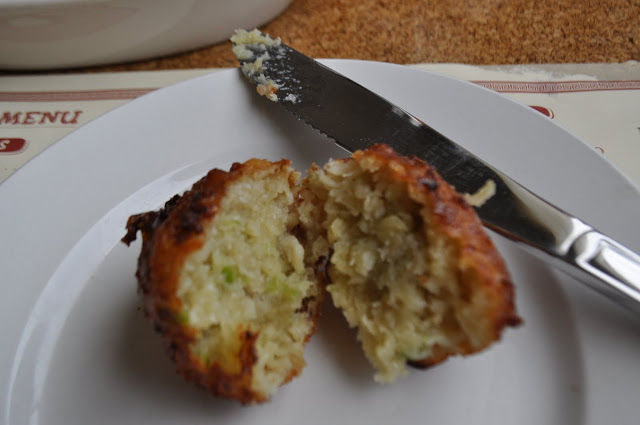 When we were through, La Diva asked for the dessert menu.  Sure, I was stuffed but was thinking of taking the dessert home for later as we were going to eat “in” back at the hotel for dinner.   We’d heard about the chocolate bread pudding with Kahlua and of course the classic Key lime pie, but when the server told me that they had German Chocolate cake baked fresh that morning, well, there was nothing left to decide.  We ordered the German Chocolate Cake to go and WALKED (the only people walking by the way) back to our room about a mile or two down the road.  A kind man in a pick up stopped and asked if we needed a ride!   No, we certainly did not, it felt good to walk after such a satisfying lunch and a few sneaky fingers sampling the coconut caramel of the cake made it all the sweeter. 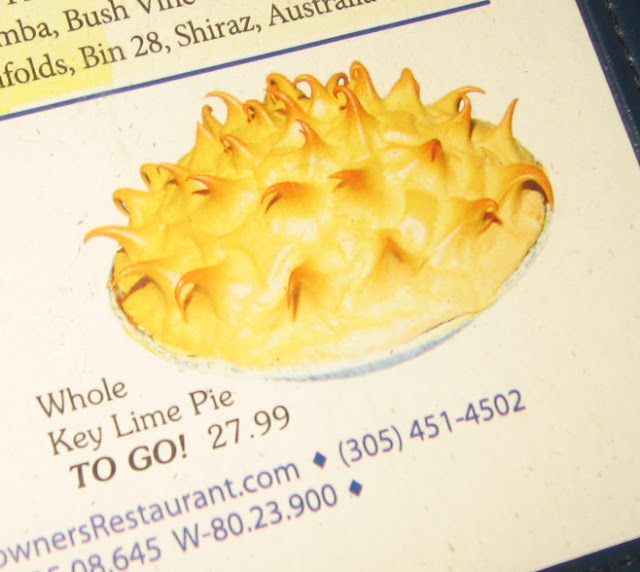 This was on the menu at the Sundowner Restaurant in Key Largo.  La Diva can’t imagine what’s in this pie that makes it worth almost $30?!  Most key lime pies that I’d seen advertised were sold at $16.95…….must be something in the meringue! 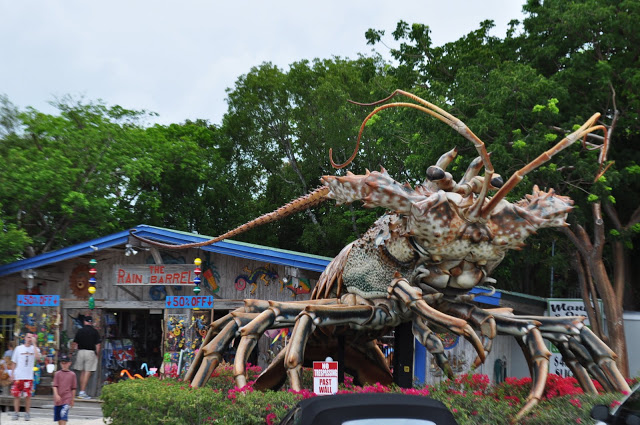 The Rain Barrel, which was a funky hodgepodge of little shops in shacks with tacky souvenirs as well as artists selling fused glass along with a potter in the rear.  That giant lobster really freaks me out…. 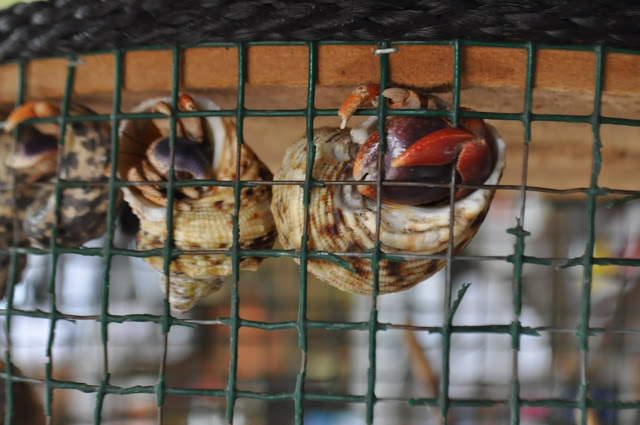 Poor little hermit crabs!  These guys were for sale at the Rain Barrel and destined to end up in some kid’s luggage and most likely starved until they make it back to Jersey or Minnesota!   The day before, La Diva actually found a miniscule hermit crab on the beach of the hotel.  It was as tiny as my thumbnail and the DJ was amazed my eye had caught it at all in the fading light of dusk. 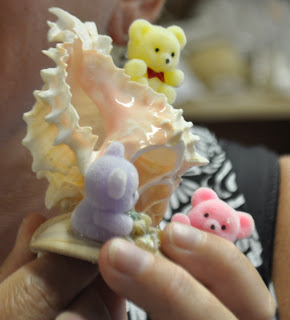 Ahhhh…..pastel Teddy bears glued to imported polished shells MAKE THE BEST craptastic souvenir! Most of these polished shells are from Asia.  It’s a shame that the world’s oceans are being pilfered only to be turned into throw away junk like this.  Please don’t buy shells.
In the afternoon it cleared up enough for us to go sailing!  One of the main reasons for our trip to the Keys was to go sailing and to stay at a place that offered water sports on the their beach.   We love the freedom of sailing in a small craft without a motor…until the wind dies!  And then you realize you are not free at all, but a slave to MASTER WIND! 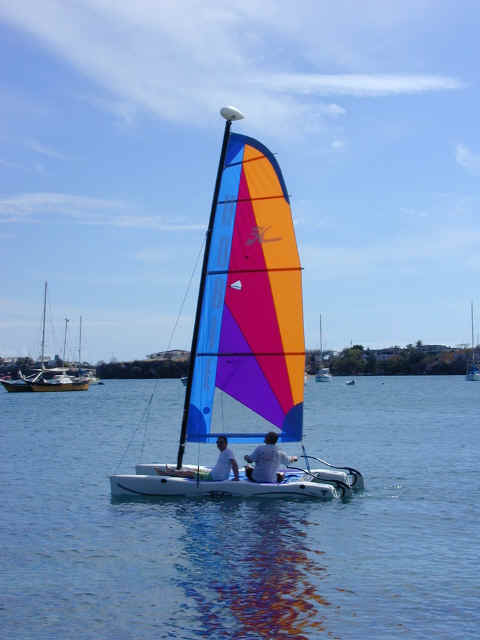 This is the just like the hobie cat we rented, perfect for two!
When the DJ and La Diva first moved to Miami from Los Angeles, we joined a sailing club.  It was fun, but we were the youngest members by 20 years and all we did was drink and sit on our bums while the captain and another person did all the work.  And for La Diva, I did not feel the sea connection…and I wanted to be a more “active” sailor like when I used to sail small skiffs back in Sydney.
That’s when I realized that I love to sail on the smaller boats.  The DJ grew up on the water and as his father was a navigator for the Royal Australian Navy, sailing was a prerequisite  growing up.  So, in his capable hands, with La Diva prone on the canvas, we glided across the waves, getting splashed and wet with warm sea water.  Sailing a Hobie Cat is the closest thing to being a fish that this little mermaid can get. 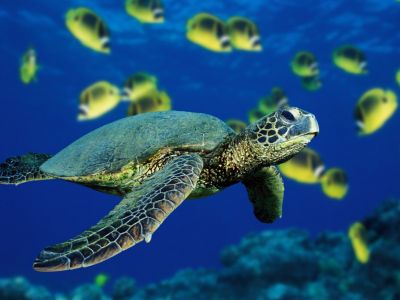 Without the loud motor of a regular boat, one sees things like beautiful sea turtles in the waves!  Bliss!  This is when La Diva la Sirena, is happiest.  We sailed around for several hours and then came back in about 5 pm, happy, exhilirated and ready for a cool glass of wine on the lanai. 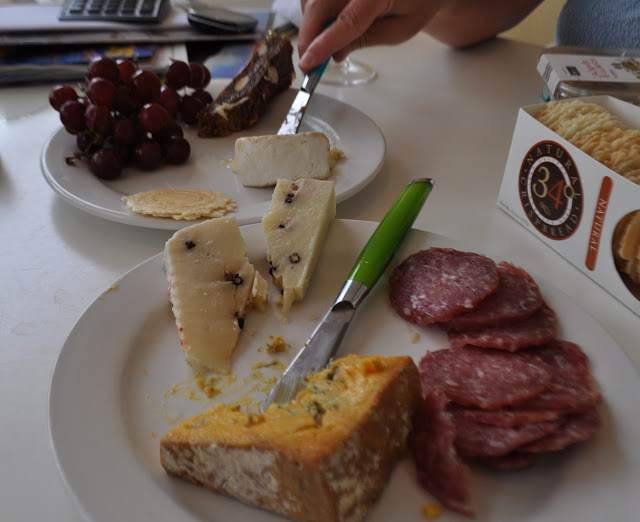 Darlings, at times do you ever feel like just eating cheese or dessert for dinner?  La Diva does!  And that’s exactly what we did!  Once we got back from our sail, La Diva poured herself a lovely crisp La Crema chardonnay and then put out this spread from The Cheese Course back in Miami.  I can’t remember exactly what I’d bought but it was a nice mix of a sharp blue, Italian sheep’s milk pecorino with peppercorns, a beautiful triple cream, fig and almond paste, salami and delicate biscuits.  DIVINE!
And for dessert:  The German Chocolate cake from Ma’s!  The cake “slice” was HUGE, four layers!  It was super fresh and moist, with REAL caramel and coconut layered between the dense cake…heaven!  Sigh….another laid back and peaceful day in the Keys and our last night!  The next day we would head  back north, up to Key Largo for an afternoon of motor boating out to the reefs.  Ciao for now, darlings!