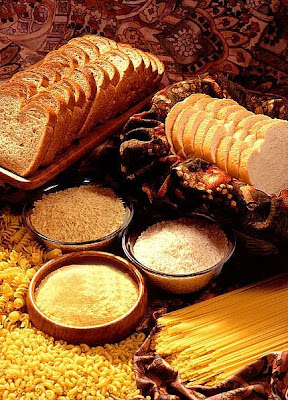 Darlings! LA DIVA ADORES CARBS. I do. And I’m NOT apologizing for it! Obviously, I don’t think carbs are a bad thing. Not at all. And La Diva, being of Italian and Polish descent, loves her pasta and potatoes! When I smell hot, fresh bread, I could probably eat an entire loaf with butter all by myself. Rice, corn, pasta, bread, potatoes and sugar, of course, are the all carbs that La Diva loves! (is there any I’ve left out?!) 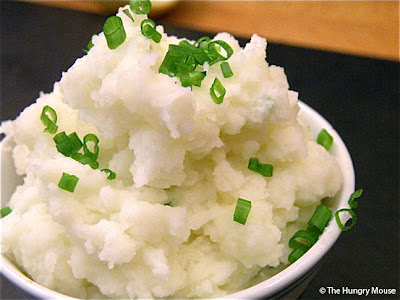 La Diva had a guest over for dinner when living in L.A. and she refused to eat my lovely mashed potatoes because she was avoiding carbs. La Diva thought it rather hypocritcal as the gal was drinking wine as well….ah well, more for me and DJ Nevah L8!

Well, what brought this up, you ask? Earlier today La Diva was considering making a certain Latin dish for dinner and while gazing at the yucca and plantain, I was reminded of a cooking show I once saw on the Food Network. I’m not sure if the chef was low-carb king George Stella, but I remember him saying he had Latin roots and exclaimed during a show: “Mexican food is the only food where they mix carbs with carbs all on one plate!” 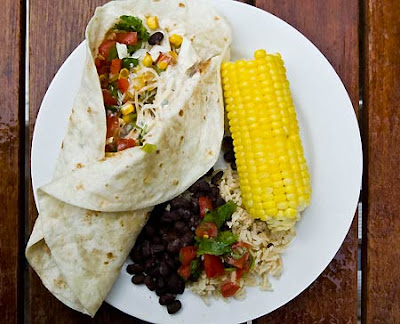 A cornucopia of carbs: Fish taco in flour tortilla with corn salsa, side of rice and beans and more corn!
I thought about it and he’s right. How many other ethnic foods commit the same carb crime? A typical plate of Mexican food will have beans AND rice AND tortillas made of flour or corn AND corn and bean salsa AND sometimes even corn on its own as well!

Although most people consider beans and legumes as proteins more often than a carbohydrate, they do have a lot of carbohydrates in them and consumption should be reduced for a low carb diet. 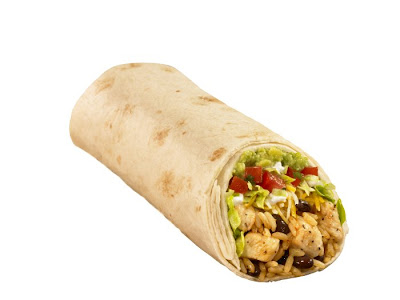 Who’s idea was it to put rice in a burrito? Blech! La Diva is tired, sluggish and “full” just looking at it!
Now let’s consider the socio-economic impact of the CARB ON CARB plate: it’s cheap and filling, and is a cost-effective meal option. In the last few years La Diva has noticed burritos stuffed with rice as a standard filling at every American “Mexican” joint and Southwestern grill. If my memory serves me, burritos NEVER used to be served with rice but some sort of meat, beans, cheese and lettuce.
I think we can thank Taco Bell with their CHEESY BEAN AND RICE burrito and HALF POUND BEEF AND POTATO burrito for starting the carb on carb burrito trend. These places are trying to make their food less expensive as well as make them more filling to the customer while offering them on the “value menu”and therefore are creating an illusion of “better value” to the consumer.

But what other ethnic food type can boast a little CARB ON CARB action? 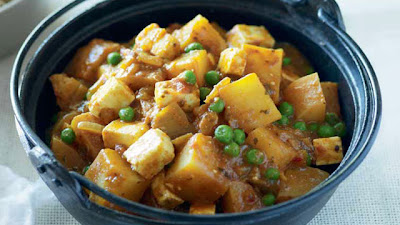 An Indian potato and pea curry is carb-laden deliciousness!
What about Indian? I’ve had plenty of potato curry over rice with naan bread! That’s some triple CARB ON CARB action, a ménage à trois of carbohydrates and La Diva has NO PROBLEM whatsoever eating all those yummy carbs together. I’ve also had sweet potato and pumpkin curry served with rice! And of course the samosa is a small dough filled pastry made with potatoes as well as potato-stuffed naan bread! 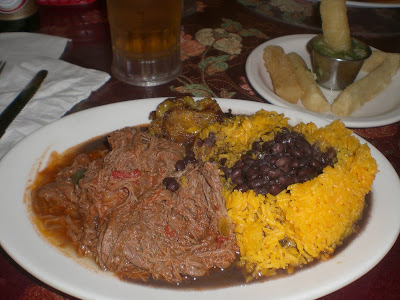 A favorite Cuban delight for La Diva: Ropa vieja (shredded beef in tomato sauce) with beans and yellow rice, sweet plantain (top) and fried yucca (side plate)
I know that Cuban food has a lot of CARB ON CARB plates. What about serving plantains with yucca? At all the Cuban restaurants here in Miami, one gets served fried yucca as well as sweet plantain AND a side of rice and black beans!

The Italians are guilty of the crime as well. 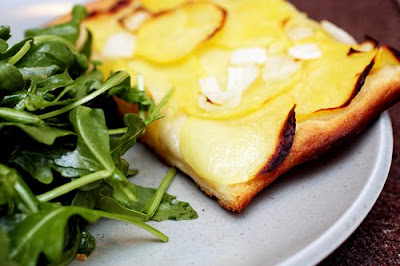 Thinly sliced potatoes on a thin-crust pizza…..Not exactly something La Diva craves but tasty all the same!
At various Italian restaurants, offerings of pizza, focaccia AND pasta all made with potatoes and rosemary are on the menu! I must admit, the pasta with potato is not my favorite CARB ON CARB combo and tends to be quite a heavy dish. I do, however like the potato pizza because they slice the potatoes super thin and the pizza crust is also crispy-thin and crunchy, so you don’t get a thick slice of the potato on the thick bread as you would with some potato focaccia.
Traditional Italian gnocchi are made with potatoes and pasta is made from wheat but I can’t think of one carb-laden sauce or ingredient I’ve ever seen with either starch. Why is it La Diva likes some CARB ON CARB action, like Indian and Mexican, but it seems like sacrilege for Italian food? 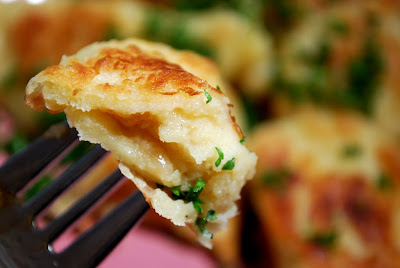 Mmmm….a childhood favorite: potato stuffed pierogi.
Eastern European food definitely has CARB ON CARB action with potato pierogi but I’m loathe to think of anything else? Potato kugel? Yep. Spaetzle with potato sauce? NAH! How about beef stew with potatoes and carrots served with dumplings? Yeah, that counts!

One time when La Diva was traveling through the Australian outback, we had stopped upon a remote desert town pub and were offered mashed potatoes AND chips (French fries) with our pub counter lunch. Of course I ate it! Mash AND fries on ONE PLATE?! Fresh veggies cost a lot to transport out to the desert so potatoes are a cheap substitute.
Finally, a funny CARB ON CARB story to leave you with. Years ago La Diva ran off to Vegas to get married and an ex-friend (or so I thought) had found out and invited herself to come along and join in my exclusive nuptial festivities. To keep the day simple, special and secret, I only invited one girl friend and my evil twin Tommy to come along. Since in those days I was not as honest and firm with people as I am now, I begrudgingly let her come in spite of my feelings of misgiving and dread. 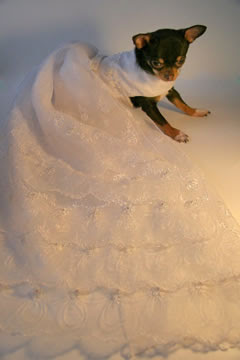 Ok, while looking for angry bride photos, La Diva found this funny photo that is a REAL DOGGY WEDDING DRESS!! Oh dear, some people have waaaaaaay to much money and time! Click on the photo to see more silliness!
On my wedding day, La Diva was getting ready with self-invited stalker (SIS) and an invited gal pal (IGP) and was nervously pacing the room in her wedding dress just before walking down the aisle. I had on a beautiful 1940’s vintage champagne silk gown. I was about to sit on the bed when IGP quickly and violently pushed me away from it! Startled and upset, I asked her why she did that? 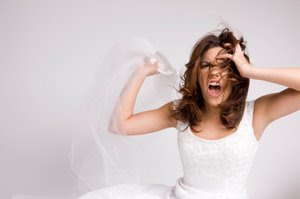 “Because of THIS!” she snarled.

In her hand, held tightly and high above IGP’s head was a

I glared at SIS. If I had sat on that, my dress, photos and day would have been ruined!!! Can you imagine us desperately trying to get yellow mustard and greasy chip stains out of vintage satin?!!!

Diva thought her behaviour was tres disgusting on every level!!!

Who eats like that? Greasy fried chips on white bread?

Why would you put a sandwich directly on a hotel bed without a napkin or plate? 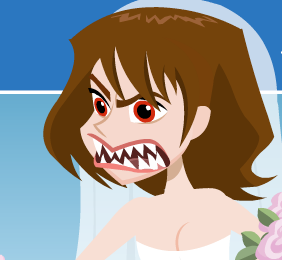 La Diva was not sure what horrified her more: the fact that her dress (and day) was almost ruined by someone she didn’t want along in the first place

the fact the girl was eating a CARB ON CARB sandwich?

These are the enigmatic and baffling questions La Diva asked herself that solidified the reasons she discontinued the friendship in the first place.

So, darlings, do YOU have any CARB ON CARB stories YOU’D like to share with Diva? What are YOUR fave or least-fave CARB ON CARB dishes?