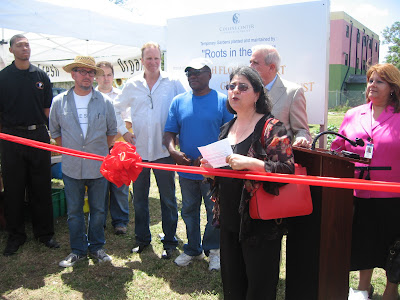 Chefs Michael Schwartz of Michael’s Genuine restaurant and Michel Nischan, founder of Wholesome Wave, Marvin Dunn, historian, author and founder of Roots in the City and Daniella Levine, President and founder of the Human Services Coalition speak at the event’s ribbon cutting ceremony on April 7, 2010.

Darlings, La Diva is feeling all warm and fuzzy inside! Yesterday was a good day for the residents of Miami’s famous “Overtown” neighborhood because yesterday was the official opening of the “Roots in the City” farmers market.

So what, it’s a farmer’s market? What’s the Big Deal? And what the heck is Overtown?

Overtown is one of Miami’s oldest neighborhoods and was incorporated when Henry Flagler, a railroad magnate and visionary, needed a place for his black workers to live. This was in 1896 when segregation was still a big issue unlike today where all racism has been eradicated. (!) Overtown is located just north of downtown Miami and is still heavily populated by the African American community where the average income is just over $13,ooo. You can read more about historical Overtown HERE. 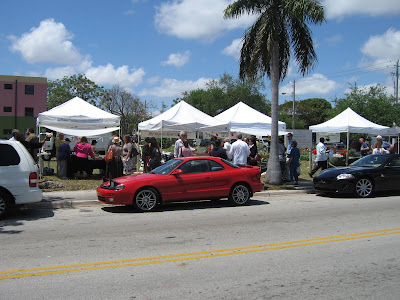 The Roots in the City farmers market is located at NW 2nd Ave. and 10th Street just north of downtown Miami and is open from 1pm-5pm. Just a few small tents offering farm fresh produce each Wednesday is making a HUGE difference within the community.
So, what’s the big deal about a farmers market in the city? Many farmers markets are in the suburbs of affluent neighborhoods where urban dwellers have no access. THIS farmers market is the first in the state of Florida that was started specifically to offer inner city residents farm fresh produce AND the ability to use their food stamps to subsidize their purchases!

This program was initiated first by the Wholesome Wave Charitable Venture in 2008 at 12 farmers markets in California, Connecticut and Massachusetts, the Double Value Coupon Program has expanded to an additional 44 farmers’ markets in 2009. Currently there are more than 60 markets in 12 states and the Washington, D.C, including California, Connecticut, Florida, Georgia, Illinois, Maryland, Massachusetts, Michigan, New York, Rhode Island, Vermont and Virginia.

These particular farmers markets are so important because it is an unfortunate fact that many inner-city areas of our fair land are blighted by a phenomenon called “urban food deserts.” An urban food desert is an area of the city where there is no access to fresh produce. Residents living in these areas are forced to shop in markets that carry no fresh fruits, vegetables or any whole grain foods.
Imagine doing your weekly grocery shopping in a 7-11? Or drinking sugary and nutrient-free fruit “drink” instead of eating an apple? Or subsiding on sweetened and preserved canned corn instead of biting into a juicy succulent ear of fresh whole corn? Now imagine that there are no supermarkets within walking distance and you have no car to get to one.
This challenge is what many urban dwelling residents face daily and is a serious problem in America. It’s also a problem that La Diva experienced first hand when attending Wayne State University while living in downtown Detroit. The significance of the farmers market is that it allows urban residents access to farm fresh produce at affordable prices.
One woman, who only gets $40 each month for food stamps, has been living on canned beans and corn and was thrilled to be able to use her food stamps at the market. Sarah Wallace said, “On $40 a month, I’ve got to really stretch it. I prefer to eat fresh vegetables. I just can’t afford it.” The double coupon program at the Roots in the City market allows Sarah’s food stamps to go twice as far. Read the rest of the Miami Herald story HERE. 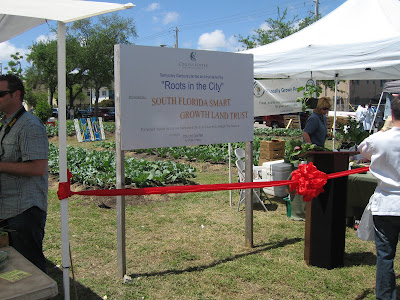 Roots In The City, Inc., founded by author and academic Marvin Dunn, Ph.D. in 1994, is a nonprofit, community-based organization located in the Overtown neighborhood and is focused on community development, creating jobs and beautifying Miami’s inner city. The organization has established several community gardens and tree nurseries in Overtown. You may click on the photo to take you to their website for more info. 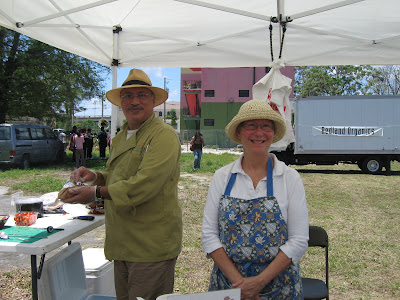 Hani Khouri and his lovely wife Mary are goat farmers, cheese makers and offer organic and authentic Lebanese delicacies through their Redland Mediterranean Organics! Darlings, YOU’VE NOT LIVED until you try goat cheese made the day before! Nutty and mild with an almost “cinammon” flavor, I wonder if Hani is feeding his goats some special Lebanese food? Click on their photo to take you to their site! 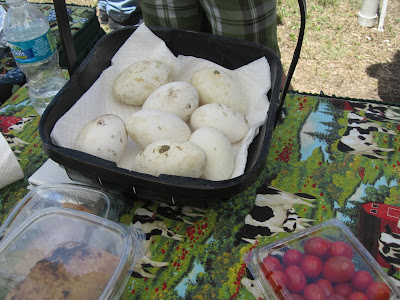 Fresh giant goose eggs were on sale for $2 each from Redland Mediterranean Organics. I was told they are rich and delicious but have yet to get the courage to buy one to eat. Maybe I will next week, La Diva loves eggs! 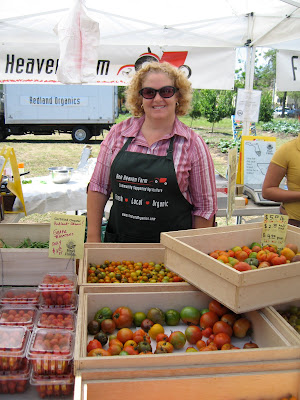 Melissa Contreras is one of the founders for the Urban Oasis project which helps initiate urban community gardens! Today she was helping out with the Redland Organics booth. To find out more about the good stuff Melissa is doing for the community, click HERE. 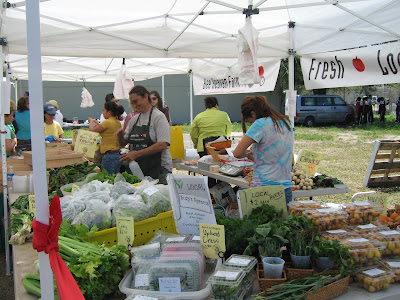 Farmer Margie Pikarsky from Bee Heaven farm offers customers a bounty of fresh-picked delights from Redland area’s finest organic growers. You know you can click on the photos to see more detail! 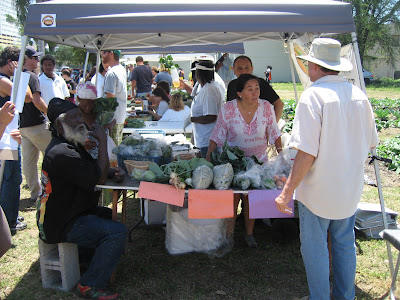 The Roots in the City booth is slammin’! 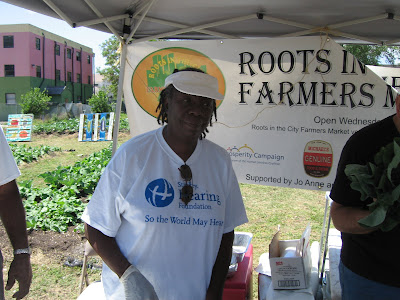 The lovely Miss Vivian Dunn, helping her brother out and offering samples of sweet potato pie and lemon coffee cake at the Roots in the City booth. Of course La Diva HAD to sample some. It would have been rude not to! 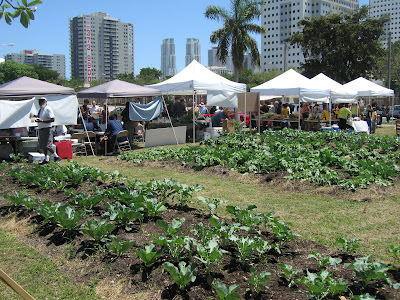 One of Dunn’s community gardens behind the farmers market stalls. The property is maintained in part through the assistance of the Collins Center for Public Policy. La Diva just loves the juxtaposition of this photo: The garden and the city’s high rises beyond! 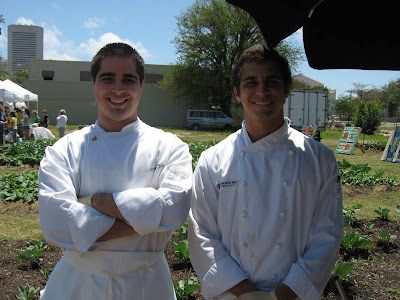 John Paul Alvarez and Jonathan Araujo are both Johnson and Wales culinary students working the “Michael’s Genuine Food and Drink” restaurant cart and offering samples of shrimp creole and collard greens made with produce from the garden.
Michael Schwartz, recognized for his farm-to-table cuisine and commitment to the sustainable food movement, is identifying local farmers, enlisting other chefs and businesses, as well as raising awareness in support of potential fundraising efforts to expand this program beyond Miami. 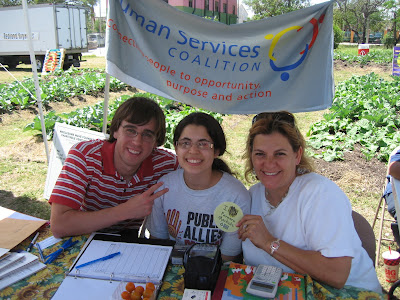 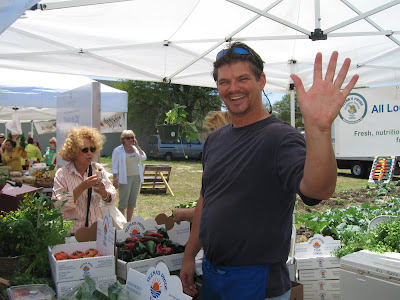 Mike Borek of Teena’s Pride is a grower in the Redlands farming community that has been supplying Chef Michael Schwartz of Michael’s Genuine restaurant the juiciest and most delicious heirloom tomatoes since the restaurant opened. Chef Michael is KNOWN for his dee-lish heirloom tomato salad and La Diva has enjoyed it each time I’ve dined there. Now YOU can buy those same tomatoes each Wednesday at the market! 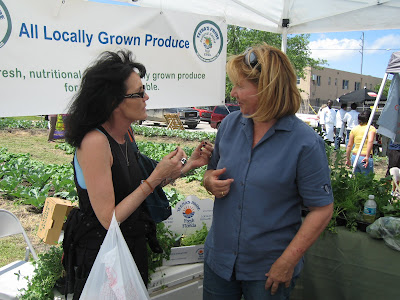 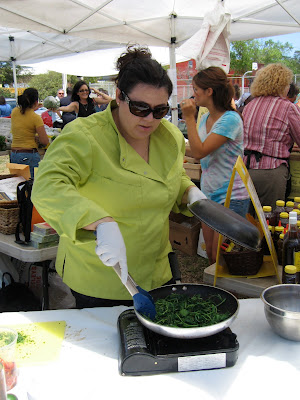 Chef Adri Garcia whips up some sauteed arugula and tomatoes. Simply dressed with salt and extra virgin olive oil, she omitted the vinaigrette she had prepared, it simply did not need it! 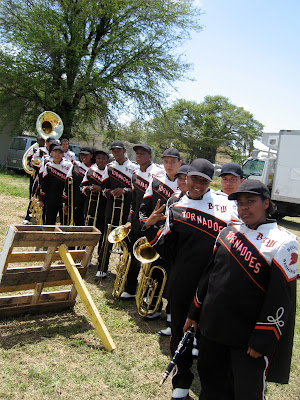 All sass and brass from the Booker T. Washington High School marching band. 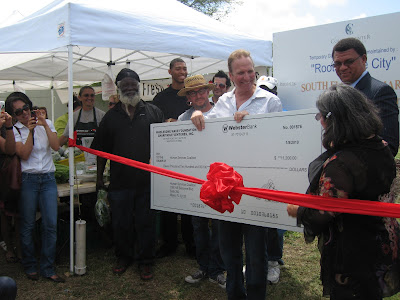 Michel Nischan, founder of the Wholesome Wave foundation presents a check to Daniella Levine of the Human Services Coalition. The mission of Wholesome Wave Foundation Charitable Ventures Inc. (Wholesome Wave) is to nourish neighborhoods by supporting increased production and access to healthy, fresh, and affordable locally grown food for the well-being of all. The organization initiated the double value coupon program as an incentive. 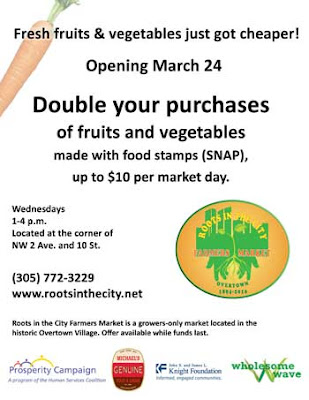 The market is only running until the end of April which also marks the end of the Southern Florida growing season and is looking to start up again this November. The hours have been extended from 4 PM to 5 PM.
And now you know why La Diva is feeling so warm and fuzzy inside: I’m thrilled that there are so many good people in Miami that are working together doing something really special for the community. What can YOU do to support YOUR local farmers and community? Get involved by getting in touch with the “movers and shakers” that participated in this wonderfully progressive event and learn how to make a difference in YOUR city!