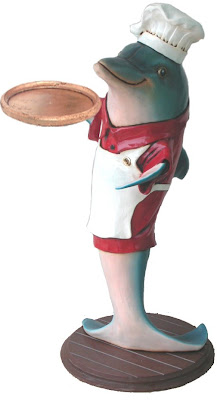 Today’s article in the Sydney Morning Herald online edition provided enough evolutionary evidence to tie the most ardent Creationist’s knickers in a knot! Apparently, some Australian female bottlenose dolphins display great culinary skill at de-boning cuttlefish before eating! This behavior has been observed by scientists repeatedly amongst the female bottlenose population in South Australian waters.

According to the article, “Female bottlenose dolphins have also been seen using sponges as tools in Western Australia, to protect their snouts as they probe the sea floor for food. In the first evidence of cultural learning among dolphins, a study in 2005 showed that mothers teach their daughters the trick of breaking off the sponges and wearing them.” The article can be read in full here.

Next thing you know, those brainiac dolphins will be popping over anytime they want and asking you for your favorite tuna recipe and borrowing a cup of calamari! And so it begins! Be afraid, darlings, be very afraid. For more information on the dolphin’s evolution and pending uprising, please click here. (La Diva has a wacky and dark sense of humor, darlings, so please indulge me for 10 minutes and take a look!) Ciao!