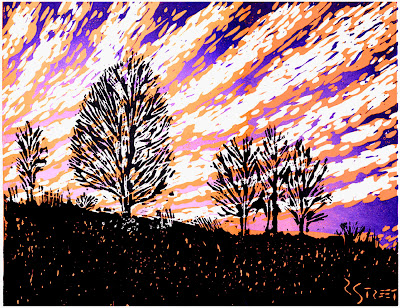 Woodcutting by R. Street. Click on his cool art to go to his website!
Hello, darlings! When La Diva was a kid growing up in Michigan, I always looked forward to autumn. To me, it meant a time for buying new school clothes, meeting new classmates and the excitement of new subjects and teachers. It meant apple picking at the cider mill and eating hot cinnamon sugar dusted doughnuts while chugging down cold, freshly-pressed apple cider! It was a time for picking out the perfect carving pumpkin at our local pumpkin patch and of course, autumn meant it was the season for one of every kid’s favorite holidays: Halloween!
As daylight savings was over and it would get dark by five p.m., trick or treating was extra-scary in the Midwest, with the wind blowing the last leaves off almost barren trees creating a spooky, sinister silhouette! My brother, sister and I would rocket out the door as soon as night fell and we wouldn’t come back home until 9 o’ clock! And darlings, you KNOW we walked MILES to get a full pillowcase of candy! Ahh, what fun we had! 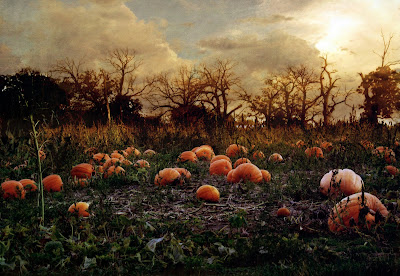 Our parents weren’t worried about us, organized Halloween parties were rare, and we went to each and every house with a light on in our neighborhood! Shame on the poor fool without any candy for us as punishment was the usual “trick” of soaped windows or door bell ringing but honestly, we were more determined to get even more candy to care and moved quickly on to the next lit house! We were the last generation of the “free kids” that could still enjoy a sense of adventure and independence without constantly-hovering, over-protective parents controlling our play time!
Now that I live in Miami, I no longer have the cool, crisp air and changing leaves as a cue to autumn’s arrival. The temperature drops from the 90’s to the 80’s and perhaps I am able to open my windows once in a while for fresh air! In spite of the local churches selling pumpkins, “fall,” pumpkin carving and Halloween just isn’t the same to La Diva amongst the ever-green coconut palms! (It could also be due to the fact that I have no kids and am in my 40’s too! haha!) 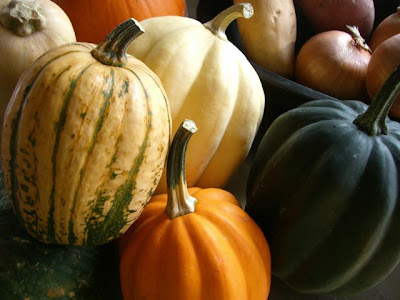 And so this brings me to why I’m posting about pumpkins: Karmic Kitchen’s Dim Sum SundayPumpkin/Squash Challenge. With all the varieties available, La Diva decided to go with butternut, as I find it to not have the stringiness of acorn squash and also has a firm texture and sweet taste. But first, a bit more info about PUMPKIN! 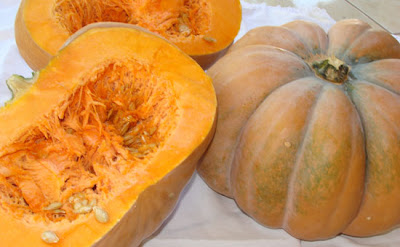 Here in Miami a very common type of pumpkin sold locally is called calabaza. It’s grown in the Caribbean and South America and is a staple eaten year-round. The Cuban’s make a fantastic flan out of it but it is used in many savory dishes as well. 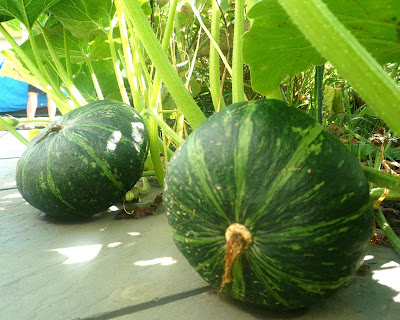 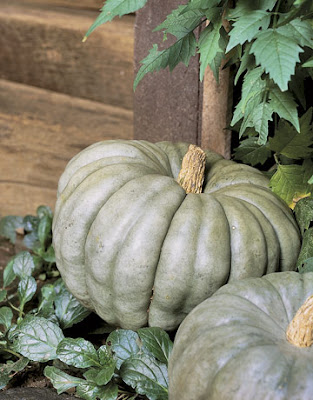 This is a type of heirloom pumpkin that La Diva cooked most frequently while living in Australia.
La Diva really got familiar cooking with pumpkin while living in Sydney, Australia. As the Aussies don’t celebrate Halloween (and their autumn is in March!) they eat other varieties of pumpkin year ’round. I’ve never seen an orange pumpkin over there but mostly the green varieties like the Japanese kabocha.
During a Sydney winter, just about every restaurant has pumpkin soup on their menu! It’s economical and very earthy and comforting as a soup choice. For something a bit different, La Diva likes to make a Thai version of pumpkin soup using coconut milk, ground coriander, chili and ginger and it’s divinely spicy!

Eating out in Australia, I’ve had pumpkin in Thai stir-fries and coconut curries, Indian vegetable curries and also most commonly with roasted leg of lamb for Sunday dinner! 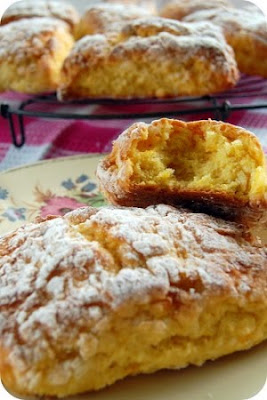 Indeed, Lady “Flo” Bjelke Peterson, ex-Queensland Premiere Sir Joe Peterson’s wife, was renowned for her incredible baking and cooking skills and was famous for her pumpkin scones! Received as a wedding gift, La Diva has Lady Flo’s entire cookbook of traditional Aussie dishes and desserts but luckily, I found a link for her original recipe here.

One of the dishes that’s become a favorite in La Diva’s house is my roasted pumpkin risotto! I didn’t choose to make pumpkin but roasted cubed butternut squash in extra virgin olive oil. Make a standard risotto (I use chicken broth but of course you can also use veggie stock for those pesky vegetarians in your life!) and once the rice is cooked AL DENTE, add butter, grated parmesan cheese and the squash. I add a tablespoon each of freshly chopped marjoram, chives and thyme and stir through carefully at the very end. SERVE and mangia! 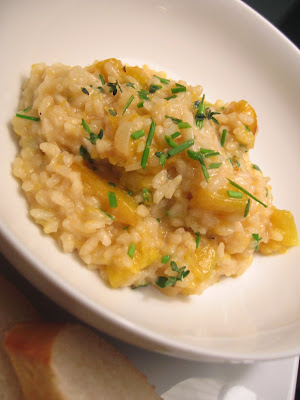 La Diva’s roasted butternut squash risotto
What’s great about this dish, is that you can serve it as a nice vegetarian main all on it’s own or you can serve it as a side dish. (I think some gourmet grilled chicken sausage would go great with it!) As pumpkin, squash and rice are cost-effective ingredients, this is also a great dish to consider as part of a tasty buffet for a crowd.

La Diva likes to serve the pumpkin risotto with crusty bread and a crunchy green salad for a satiating meal. (It’s Big Fella Approved!) And, it’s so delicious heated up the next day!

La Diva’s opened up the Dim Sum Sunday to her foodie fans on Facebook and received another FABULOUS entry for yummy pumpkin soup! 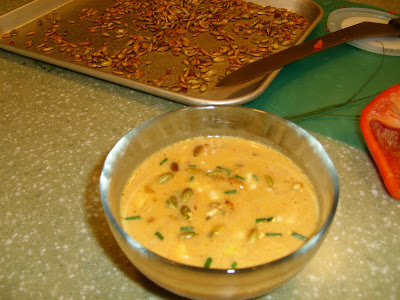 Pumpkin Soup…inspired by the hundreds of pumpkin soup recipes out there. Entered by Heather Gallagher from Michigan. (you know her, she’s my cousin that gave everyone a home-made pie at her wedding?!)

Ingredients:
2 tbsp olive oil
1 tbsp butter
1 cup chopped white onion
1 cup crisp corn kernels (canned without salt is actually good if fresh is not available) frozen is too soggy
1 cup of diced potato (I have used frozen “potatoes o’brien” instead and it’s not too bad!)
1/2 cup of diced/finely chopped red pepper
32 oz chicken stock (I taste a huge difference between real, homemade stock and stock from the store…but I’ve use the store bought stuff before and nobody else complained.)
1 tsp black pepper
1/2 tsp ground sage
2 cups of cooked pumpkin (I have tried canned and fresh and I prefer canned for this recipe because of the consistency)
1.5 cups of whole milk or half & half
1/8 cup blue cheese crumbles
chives for garnish/topping roasted, salted pepitas for garnish/topping

In a large dutch oven saute onion in the olive oil and butter until translucent and starting to develop a toasty brown around the edges. Toss in potatoes and cook until they are done and show some brown on the edges. Add corn, red pepper, black pepper and sage and cook all together for approx. 5 minutes. Add the chicken stock and simmer with vegetables for 15-20 minutes and then add the pumpkin, stirring gently.

Heather says: “This is not a labor intensive, absolutely ‘by the recipe’ type recipe. I have added different ingredients like crumbled bacon, walnut pieces, green onion on top, a little horseradish mixed in, some maple syrup mixed in, some hot sauce on top, etc. It lends itself to just about any kind of special taste you’re craving. It’s super healthy with sodium being probably the worst offender in the whole dish. It’s also very low in fat.” 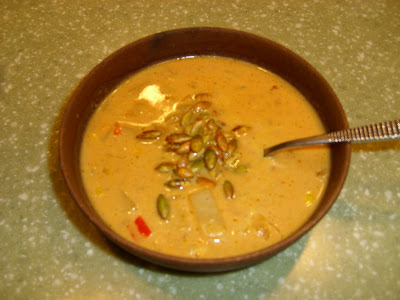 Heather Gallagher’s pumpkin soup with veggies, blue cheese and pepita garnish! YUM!
You know what I like about Heather’s soup recipe? There is some body and crunch to it! Many times I’ve had pumpkin soup that looks and tastes simply like pureed pumpkin baby food! blech! I’m lovin’ the addition of the veggies and pepitas for crunch and texture and La Diva thinks you can never go wrong adding a bit of cheese (or bacon!) to a dish for an extra hit of flavor!

If you want to get other FABULOUS PUMPKIN AND SQUASH IDEAS click HERE to go to Karmic Kitchen and then check out the comments. If you click on the commenter’s name, it will take you to THEIR BLOG and you can see what they posted!