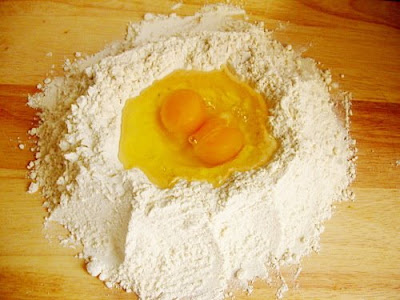 It all started out so well….

Ay ya yai, darlings, what HELL has La Diva taken herself into?! As per my post the other day about my disastrous attempt to “make” ravioli out of Chinese “pasta” wraps, today I have ventured to “make my own” because friends have told me “it’s so easy” and “you can do this.” Hmmm….

It just so happens that the night I made the slimy, sweet egg fruit ravioli (Crikey, it SOUNDS disgusting!) La Diva was flicking through the cable channels when I came upon Alton Brown making pasta. DJ Nevah L8 was not in the mood to see yet another cooking show (that will only make him hungry) and insisted I change the channel. I could not. I HAD TO see how this was done. Alton not only showed how to make dough with a pasta machine but also how to knead it by hand. Looked simple enough, I think I can do that! 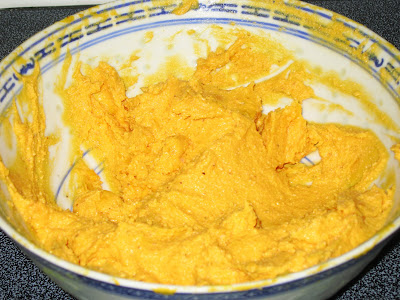 So, I look up Alton’s pasta recipe online and then I get to work. Get the flour on the counter, make the well, slowly add in the wet ingredients and….IT’S A MESS. There is WAY TOO MUCH flour and I can’t seem to get it all into a ball. It’s just a crumbling, flour-ey mess. I am determined to complete this task however and wet the dough a bit more to make it pliable. I’m meant to knead the dough by hand for 8-10 minutes and continue plying the dough. After what seems like an eternity, I end up with a crumbly, dried out flour ball. Ok, into the fridge it goes with cling wrap for an hour to chill. Hmmm…that didn’t go so well. 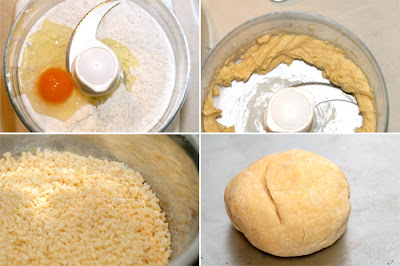 Disappointed yet still determined, I thought “Hey! I have an idea! I have a small food processor, and it always turns out well when they do it that way on tv!” I am now motivated ALL OVER AGAIN and feel that I can rectify myself as a cook if I can process a dough. I follow all the directions except I cut the recipe in half as I have only a small processor. It says to run machine until “dough begins to pull away from the sides of the bowl.” Um yeah. It never happened. Again, even with the strong food processor, there still was not enough moisture to form a dough ball.

Meanwhile, the high-pitched humming of the constantly running food processor was making me deaf while I smelled the motor burning. Not good. After five minutes of continuous processing with my ears ringing and no dough ball being formed, I added a bit more water. Ahhh! That seemed to do the trick! But no, wait, it didn’t. I shut off the processor, the dough was warm and crumbly from the excessively high speed mixing and I take it out of the processing bowl. Now, it’s a crumbly, flour-ey mess in my food processor with glue in the middle! Yay! Home-made pasta! Yay! I CURSE YOU, Alton Brown!!!

Ok, calm down. BREATHE. Pour a nice glass of wine. Ahh….Let’s all just chillax while the dough rests in the fridge for an hour, shall we? 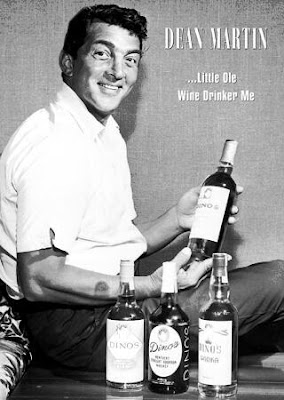 An hour later, I took out the dough I had made by hand and cut a third of it off. On floured granite, I began rolling out the dough. So far, so good. I took out one of my pastry cutters and cut a few circles out. I tried to fill but it was too small once I folded in half. Let’s try again with a bigger cutter! I went up a few sizes and that did the trick. I noticed, however, that not all of my dough circles were the same thickness! YIKES! This is important as you will be cooking all of the ravioli together so of course, they must all cook in the same amount of time! Obviously, this will take some practice.

I made only enough ravioli for one dinner. When one has THREE CUPS of filling and am using only a teaspoon at a time, the going is VERY SLOW. Before I went any further with this, I took the ravioli, put it in the freezer on a baking tray and put the rest of the filling and dough back in the fridge. As I’d made the gumbo for dinner, I would “test” the new ravioli out the next day. 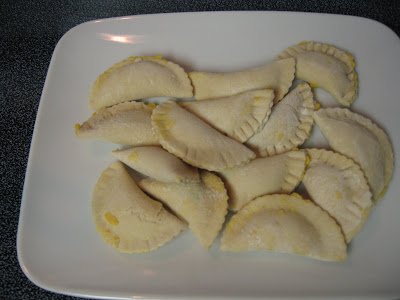 The frozen ravioli, ready for plunking into the pot!

Well, that day came and I boiled up the ravioli straight from the freezer as per usual. I added a bit of brown butter sauce with sage and served them up.

Result: Hmmm….not half bad!! I really liked the chewy texture, it was a bit more dense and to tell the truth, slightly tough, but I much prefer that texture over the slimy wonton texture! La Diva DOES love a good, rustic pasta. As for the filling, the sweetness WAS mellowed out by cooking but still, this is a bit too sweet and rich for my tastes. 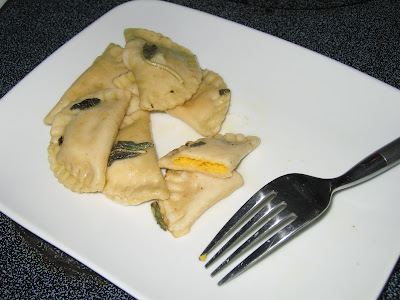 For next time, I will use the canistel only in desserts, it is just too naturally sweet to use in savory cooking. As for the pasta, I think I will continue to practice making it home-made but with more savory fillings. Since Java Junkie told me she had a great pasta recipe, I emailed her and asked for hers. Well, no WONDER she has success, she’s using half the flour. I’m going to try the new recipe which is bound to be easier to knead! 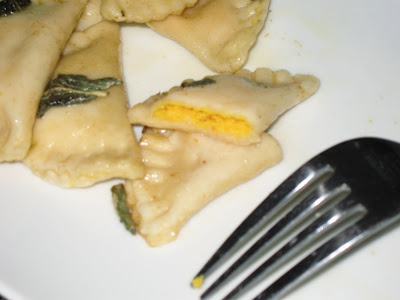 And finally, what will I do with the rest of the dough and filling? I guess I better get to steppin’ and make me some sweet ravioli and freeze them! But I can’t. I can’t eat ONE MORE of those overly-sweet, sickly rich ravioli. So, into the garbage it goes, a lesson learned. Arrivederci, darlings!