Wacky artist Jeff Koons’ “Lobster” hung at Versailles for an exhibition that outraged some of the French!
Darlings! You know it’s only right that a Diva participate in a culinary throwdown that involves lobster! Heff of Heff’s Bar and Grill won the last challenge of pepperoni (yeah, don’t go there!) so naturally he got to pick the ingredient for this challenge. And La Diva would like to thank him for choosing such a fabulous ingredient to work with for the throwdown. Lobster is one of those items I love to indulge in occasionally but hardly ever prepare at home. In fact, it’s been years since I bought whole live lobster and feasted upon its rich, delicious flesh! 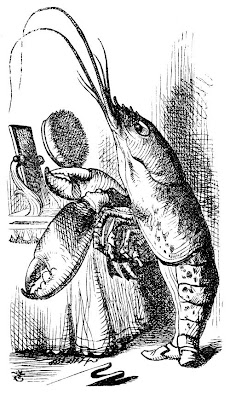 However, La Diva has heard some complaints around the blogosphere regarding the choice of lobster as the throwdown ingredient.

“There isn’t any available here.”

“It’s not sustainable, I’m not getting lobster unless it came from within a block of my home.”

Rubbish, says La Diva. Honestly, people, if you can’t do the challenge for whatever reason, then kindly step aside and let the other participants play without your grumbling, it’s not very sportsmanlike. When you win the throwdown you can pick the ingredient you want! Sheesh! 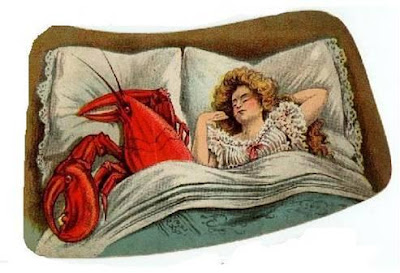 “Mind your claws, please, dear!”
As you know, La Diva likes to participate in these challenges not so much for the glory of winning or to feed my competitive spirit, but to challenge myself to try new ingredients, dishes and kitchen techniques I’ve not tried before. So, I always try to use a recipe that will push me on all levels. And when I heard the ingredient for this throwdown was going to be lobster, well, La Diva KNEW only one cookbook would serve me for this challenge: 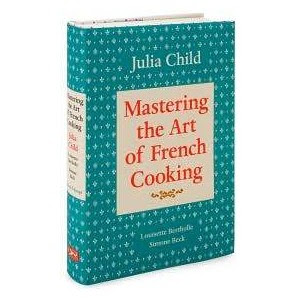 Yea-uh! DJ Nevah L8 gave a copy to me for my birthday in February and I have yet to make a recipe from it. Honestly, French cooking is not really my fave as I find the food to be incredibly rich with all the butter, cream and eggs. And besides, you know La Diva is always watching her figure so I try to cook with a minimum amount of those ingredients and lean towards Asian cooking for that very reason.
Yet, I wanted to stretch my culinary wings and thought it was high time that La Diva embraced a cooking style that is revered and extolled by the world’s best chefs.


My entry for the lobster throwdown is: 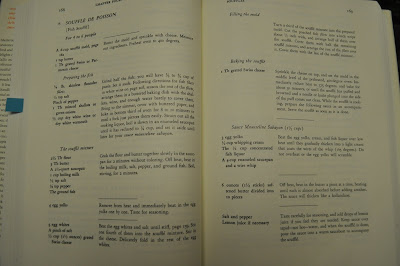 You can click on the photo to read the recipe for yourself! This soufflé would make a lovely, decadent brunch dish!
With 2 sticks of butter, 7 eggs, 3 small lobster tails, 1 cup whole milk, 1/2 cup Swiss cheese, half cup of cream, a fish head and 3/4 of a pound of flounder, it ended up costing me about $40 to make. But, honestly darlings, what would you pay in a restaurant for just a slice, even if you could find something so titillating on the menu? This souffle served six so I knew we’d have an ample taste between the two of us! That’s less than $7 a serving! 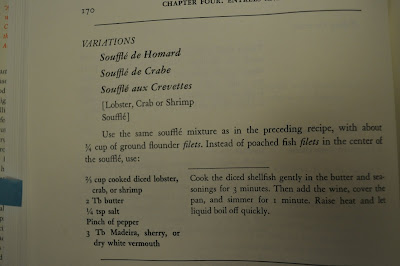 Julia wisely suggests that one reads the recipe through completely before beginning. This is good advice as this recipe has many steps that can “make or break” this intricate dish. 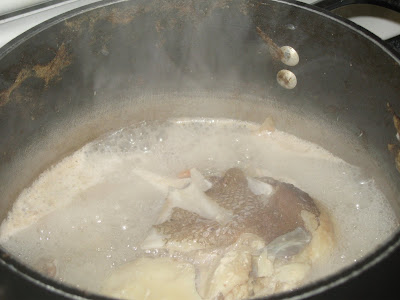 The recipe called for only a 1/4 cup of concentrated fish liquor so I bought a fish head to make my own as the first step. 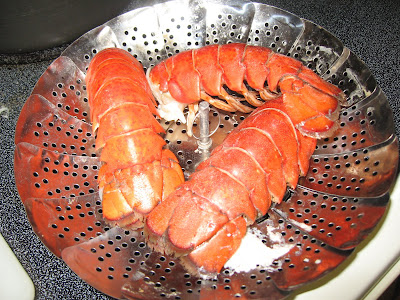 Three small Canadian lobster tails were steamed and flesh removed when cool. I added the steaming broth to the fish head stock and continued reducing. 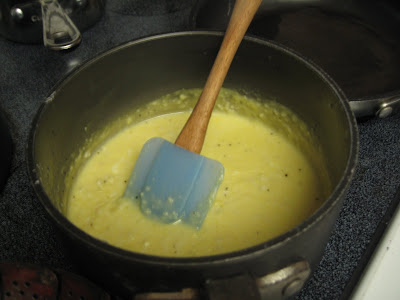 Ground, raw flounder combined with flour, butter and milk as the base of the soufflé. The flounder gave the soufflé body and texture and an entire soufflé made of lobster would have been unbearably rich. 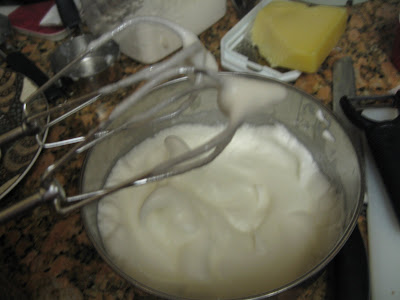 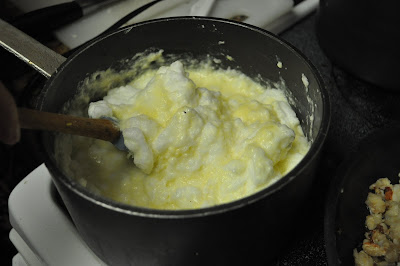 And then gently folded into the flounder and milk mixture. 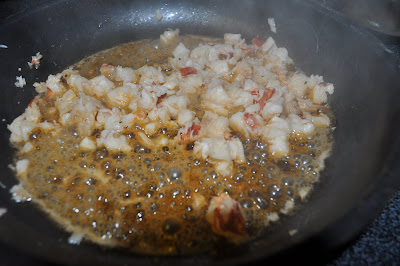 Meanwhile, the lobster meat was sauteed in butter and sherry and then the liquid reduced. In the future, I will undercook the lobster as I forgot that it would be cooked for an additional four minutes on the stove. The lobster tasted DIVINE but it was slightly tough. 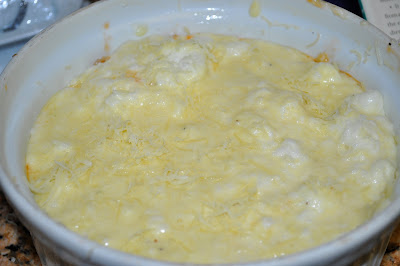 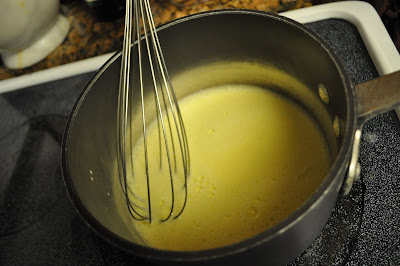 Meanwhile, it was time to make the sabayon. I started out by whisking cream, 3 egg yolks and the fish liquor on a medium heat so as to make a creamy sauce. I had to be careful the mixture didn’t get too hot or I would have had scrambled eggs! 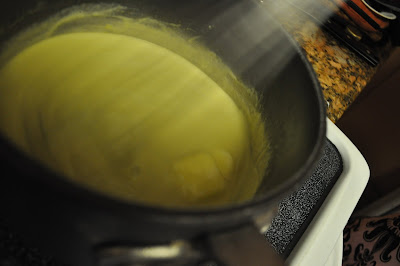 Once the sauce coated the whisk, I slowly added the 1 1/2 sticks of butter, piece by piece and whisking furiously after each addition. I was meant to keep the sauce warm over tepid water but found it was just fine sitting on the stove and would stir it every few minutes so it would not over cook. 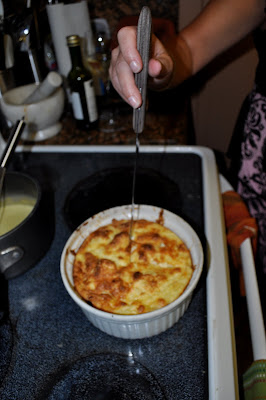 La Diva sticks the knife in the middle of the soufflé to test doneness. If the knife comes out clean, the soufflé is done and must be served immediately. 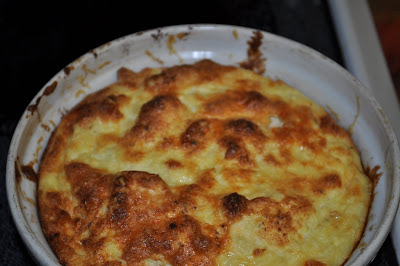 Brown and tempting, my soufflé didn’t rise much above the top of the dish. I’m not sure it was supposed to but it looked good to me! 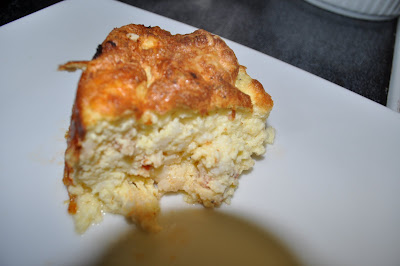 The first slice comes out easily and it’s cooked through with a light, airy texture. Although this dish served six, I greedily cut it into quarters! 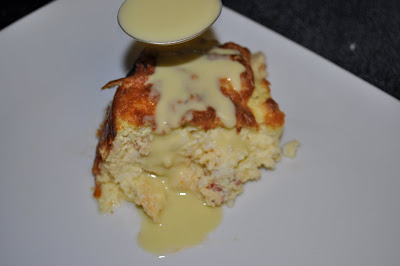 The sabayon sauce is generously spooned over the top. 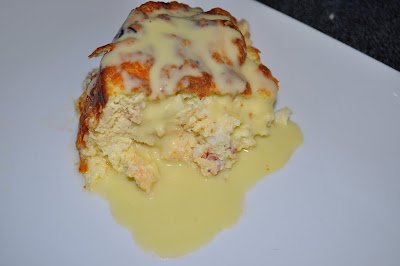 Voila! Lobster soufflé with mousseline sabayon sauce! DIVINE!!!
RESULT: The texture and taste of the souffle was incredible and rich. The butter sauce was such a silky delight and combined with the lobster in what can only be described as heavenly. This dish was delicious and a richly decadent treat that La Diva could only indulge in once in a while. DJ Nevah L8, however, naturally went back for seconds!
If you’d like to see all the other lobster throwdown entries, wander on over to Heff’s Bar and Grill to take a gander! I am always amazed at how many ways people can interpret the throwdown ingredient! Ciao for now, darlings, La Diva is currently in a cholesterol coma!
Are you looking to expand on your culinary skills? Or would you like to learn how to entertain with FABULOSITY? If you are in the Miami area, contact La Diva Cucina for Miami cooking classes or Miami cocktail classes today! Party packages are also available!