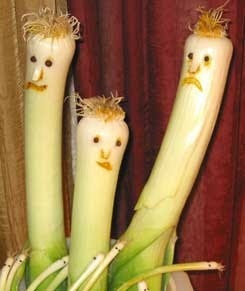 Darlings, La Diva is thinking of changing her name. Yep. I’m going to start calling myself:

La Diva “I-had-the-best-of-intentions!” Cucina. Because it seems lately, more often than not, that’s what I find myself thinking and saying, especially when it comes to spreading my culinary wings.
I think I’m in a recipe rut and am truly feeling uninspired lately. Seems all I can think to make anymore is: risotto/soup/stew/stir fries. Yes, they are delicious but they are also dishes that I’m waaaay too comfortable with because they are all essentially one pot meals.
Take, for example, this culinary throwdown for leeks. I LOVE leeks. La Diva was excited. La Diva had ideas. But when it came time to execute, Dismal Failure reared its ugly head again. Sigh.
Ok, I’m REALLY being too hard on myself and being a bit of a drama queen (I AM a diva after all!) The dish did not fail, it was transformed from a dish that was kind of “okay” and a bit “safe” to begin with, into a dish that definitely was boring and predictable and one that I make on a regular basis. So much for challenging myself and taking a culinary leap off the edge!
When our last culinary throwdown winner, Allison from Tales from La La Land, picked leeks as the ingredient for the next throwdown, I had myriad ideas in my head but nothing solid. I took a gander at my cookbooks for inspiration and still, nothing really jumped out or made me think “Wow, I want to try that!”
Leeks in a terrine? No good, too many spring veggies that are not in season. Leeks served cold in a vinaigrette? Too boring. Braised leeks? PEDESTRIAN! Where’s the challenge in that for a Diva? Oooh, how about in a gratin?! YUM! Yes! Sounds faboo but aren’t you on a diet and do you really need to eat anything with more cream, cheese and breadcrumbs? Sigh. Okay, what else? 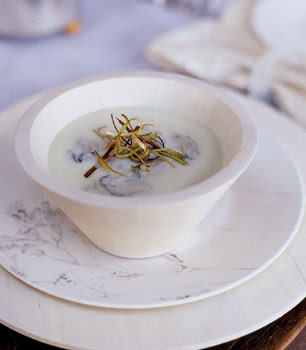 I found the recipe or Oyster Soup with Frizzled Leeks on Epicurious from 2003 AND in my new Gourmet cookbook that Ruth Reichl INSISTED was full of NEW recipes. A creamy little white lie, perhaps?
Ah yes, HERE’S WHAT I REALLY WANT TO TRY: Oyster soup with frizzled Leeks from Gourmet. Yes! I’ve been wanting to try making frizzled leeks and leeks are in the soup too, not just a garnish so, YUM, I’m in! But then La Diva notices that the recipe calls for a cup of cream, butter and SIX DOZEN OYSTERS and is enough for eight people. WAH! Yeah, I could cut the recipe in half but again, do I need to make double portions of something so rich in the New Year? (When you have a wedding to go to in less than two months and nothing fits in your Diva closet?!) Back to the drawing board…
Mushroom leek soup? Too mushroomy, I want LEEKS to be the star. And then, into my inbox comes David Leibovitz’s recipe for potato leek soup. Perfectly timed.
But no. I’ve made that soup a hundred times and honestly, I’ve made three soups/stews in the last two weeks. NEXT! On to Epicurious I go….
How about this lovely recipe for Leek Fennel and Poppy Seed Tart? YES! Yes, I shall make a cheeky, leeky tart! Full of vegetables, only a cup of whole milk and a quarter cup of parmesan cheese on puff pastry. Not too bad calorie-wise! So, off on my little Diva bike I ride to get the leeks and other ingredients and get to the store and see NO LEEKS. Damn. Do I really want to make another trip to a grocery store on Sunday? NO! (You all just know how La Diva LOATHES going to the grocery store on a Sunday!)
I come home and look at the recipe again and just notice the six reviews. Uh oh. Four out of six are bad!

“run of the mill”

were some of the comments made. Sheesh. La Diva better re-evaluate this. So, I decide to change the recipe around and trade in the puff pastry for some pie crust. Back to another grocery store I go and this time, yes, SUCCESS, they have leeks a’ plenty!
I made the crust in a 12 inch tart pan and then put the sliced leeks and fennel into a pan to roast on 450 degrees for a half hour. Already changing the recipe, I added olive oil as well as a bit of butter the recipe called for, knowing the veggies would stick otherwise on the high heat. I also had to take them out and turn them a few times otherwise the vegetables would burn. The recipe failed to tell you this but I roast my vegetables on high heat all the time and knew the delicate fennel and leeks would surely blacken beyond caramelizing on 450 without turning them once in a half hour! (Ruth Reichl was soo right when she said there are a lot of bad, untested recipes out there!)
So, the veggies come out to cool and this is just about where the Epicurious recipe ends and La Diva’s recipe begins. To the veggies I added some crumbled bacon, used cream instead of milk (because I had it in the fridge and didn’t want to waste it, God forbid, I THROW OUT a bit of cream! OY!) and used Jarlsberg cheese (again, because I had it) along with a bit of parmesan instead of just using the parmesan cheese. I omitted the poppy seeds altogether. So, in essence, my leek fennel poppy seed tart has really just morphed into a classic quiche, a mix of traditional quiche Lorraine and a leek quiche. Meh. Not quite the adventurous use of leeks I was looking for. Ah well, I started out with the best of intentions. 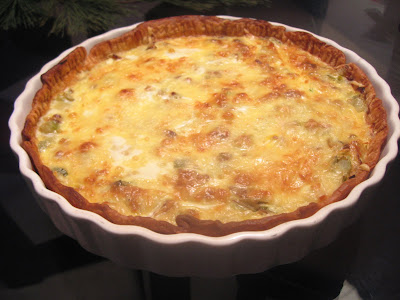 Click on the photo to take you to a really easy and delish recipe I made last season for creamed leeks and greens, a perfect side for steak!
So, how did it all taste? It was okay. I say okay because, usually I would use Gruyere cheese and found the Jarlsberg to be super bland in comparison. The taste was so subtle as to almost be a waste of calories and fat. (Honeychile, if La Diva is eating cheese, I want to TASTE the cheese! It’s like eating cold french fries: what’s the point?!) The leek and fennel combination was really very lovely and the subtle anise flavor of the fennel was just divine; I think the combo would make a great side braised and served with some fish. However, I don’t think I was able to eek any more flavor or sweetness out of the vegetables by roasting them as opposed to simply sautéing them on the stove. I thought the roasting step to be too time consuming for the result produced. Besides, some of the reviewers suggested adding wine to the veggies for more flavor. Sounds good to me.
And as for the calories? With the addition of shortcrust, bacon, butter, cream, olive oil, cheese and eggs, I’m CERTAIN that the stupid Leek Fennel Poppy Seed Tart cum Quiche Lorraine Roasted Fennel Leek Quiche was even MORE CALORIES AND SATURATED FAT than the stupid oyster soup! DOH! (I hate when that happens!)

See what I mean? I started out with the best of intentions….

Dare I go back up to the shop for more leeks and try another recipe? No. I can’t. I have an entire CSA produce box to get through and more will be here yet again on Saturday! Which brings me to my next point: I’m not sure I’ll be participating in any more throwdowns in the near future. I have too many veggies that I’ve already paid for to be going back up to the market to get even more! (I’ll do my best though as you know I have a competitive spirit!) 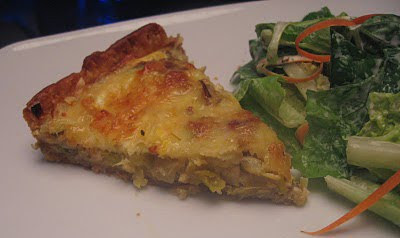 Cheeky leeky roasted peeky fennel quichie!
So, here’s my entry and judge me if you will: Roasted Leek and Fennel Quiche. Meh. I hope the rest of you had more inspiring dishes! And thank you, Allison, for hosting the culinary throwdown! (Click HERE to take you over to see what Mizz La La Land and the others came up with!)
I googled ‘fat diva’ and this is what came up! Haha!
So, there you have it. An uninspired Diva. A dieting Diva. A depressed Diva. Okay, I’m really just kidding about being depressed but I need a SHOT of something as I just can’t seem to get out of my recipe rut. On the positive side, La Diva recently acquired two new cookbooks (Gourmet TODAY and Yvonne Ortiz’s “A Taste of Puerto Rico”) and borrowed “Spain: A Culinary Trip” by Mario Batali from my neighbor as well as was given four more over the last year I’ve barely looked at. Time to get out of the comfort zone and embrace new challenges! Ciao for now, darlings!cooking class, cocktails, parties, cocktail party, Miami, coral gables, events, bartending class, cocktail class, Laura Lafata, Miami Beach, miami cooking classes, bachelorette parties, bachelorette party, personal chef, corporate events, catering, personal chef, party entertainment