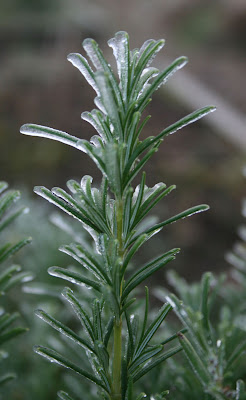 Hello darlings! As you know, Florida farmers had a really tough time with the frost, wind and cold last week and it hit some crops pretty hard. When I agreed to participate in the CSA, I agreed to take the loss along with the farmers, so this week’s share was not as bountiful as it usually is at this time of the year. And while my share is slightly smaller, the farmers still get the raw end of the deal.
Farmer Margie of Bee Heaven Farms did not escape Mother Nature’s wrath, even with plastic covers the green beans might not recover and the tops of the tomato plants froze. (Click HERE to take you to her blog) I’m glad I really enjoyed the green beans from the past couple of weeks as I’m sure that I won’t see them again this season. Not only will the shares be a bit, er, smaller or “greener” (as in tomatoes!) but you can bet you’ll see price increases nationwide for any produce from Florida. 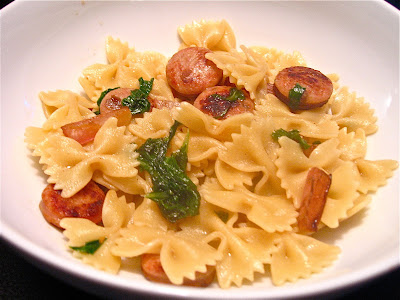 You can click on this photo to see the wee roasted turnips! There they are!
Roasted French breakfast radishes with sauteed chicken apple sausage and radish greens over farfalle paste. Well, well, well, this certainly was the surprise recipe of the week! Learning from my mistakes from last season, I knew if I was going to take advantage of using the radish greens, then I better use them immediately!
La Diva is no lover of radishes. I can eat them raw, with salt, or in a salad but only a few….so I decided to roast them as I’ve had loads of luck enjoying beets, carrots and turnips after I have roasted them! This cooking method just seems to bring out the natural sweetness of just about the bitterest of vegetables! Besides, I just saw Chef Mario Batali serve white radishes cooked on the last Iron Chef, so I wanted to try them cooked as well as I’d never had them that way.
So, I roasted the radishes and thoroughly washed and chopped the radish greens. I sauteed the sliced smoked chicken apple sausage and greens seperately and then put it all together over the pasta, using a bit of the starchy pasta water to make a bit of a sauce. Like I said, I was REALLY surprised that this dish came out as good as it did. The sweetness of the sausage was a really good foil for the slight bitterness of the greens and radish. Believe it or not, I will make this dish again! Hooray for being adventurous! 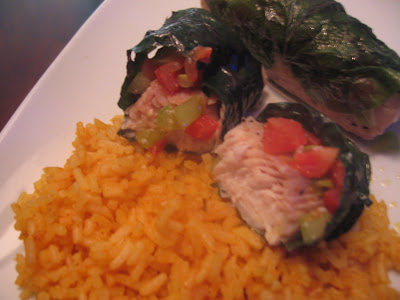 I cut the mahi mahi filet in half and wrapped a leaf around each half. I cut one portion in half so you can see the salsa and hubby said my photo looked gross. Eh. Sometimes it’s tough being with someone who’s more of a perfectionist than me!!
With the betel leaves I made a baked Mahi Mahi wrapped in betel leaf with fresh plum tomato and tomatillo salsa with yellow rice.

The first thing DJ Nevah L8 said to me upon tasting this dish was:

“EEEEWWWW THIS IS TOO FISHY, I CAN’T EAT THIS” and spit it out onto his plate in front of me.

La Diva glared at him and replied:

I purchased it that day and smelled it myself before I even bought it. Apparently, hubby was not too appreciative of the smoky, medicinal flavor of the betel leaf. Yes, it did mellow with cooking but I must admit, I’m not that fond of them myself. Knowing how I feel about wasting food, hubby wisely took the leaf off and liked the fish much better! The salsa was quite tangy from the tomatillo, but pairing it with the betel leaf was not a match made in culinary heaven. It was ok, the betel leaf flavor is still very strong.

As Bill from Tinkering with Dinner pointed out in my comments from the last share, the betel leaf is also known as hoja santa leaf and used in Mexican cooking as well, so that’s why I went with the Latin inspired flavor profile. It’s supposed to have a “root beer” taste but I couldn’t recognize it at all with the fish until the next day when I re-heated it for lunch. Ahhhhh….there it is…. Yet….IT STILL WAS NOT A HOME RUN in the La Diva recipe file. Meh. 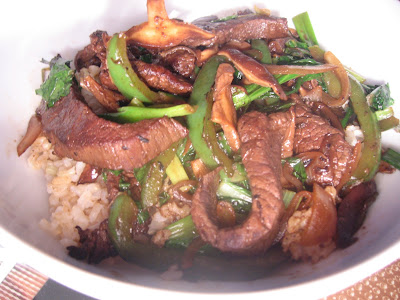 The Japanese komatsuna (you can click on the word to get more info on this) and one green pepper was paired with shitake mushrooms and green onions for a Chinese style pepper steak stir fry over brown rice. I do love this combo and I think the shitake mushrooms are such a perfect, hearty mushroom to go with the beef. I still want to try making this with chicken though. 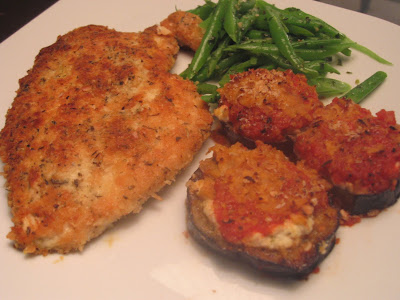 THUMBS UP! Breaded chicken cutlet, green beans with chimichurri and baked eggplant with ricotta and tomato sauce. This meal was definitely the HOME RUN recipe of the week!

eggplants was rotten inside, so I only had one to use. I DID end up using the left over chimichurri sauce on the green beans and hubby loved it! (he used the rest of the sauce every chance until it was gone!) I lightly pan fried them and then added a creamy layer of ricotta/parm cheese mixture and topped with some tomato sauce and fresh bread crumbs (all left over from the dumpling debacle) and baked them while I made a simple breaded chicken cutlet. Perhaps it was the freshly made breadcrumbs or perhaps it was the parmesan cheese, but this was one of the tastiest, juiciest breaded cutlets I’ve made to date. Just goes to show you how quality ingredients can really improve the flavor of a simple dish. 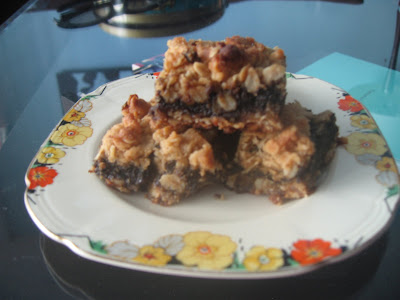 Black sapote oat bars were made out of the super ripe black sapote or “chocolate pudding fruit” from the share a few weeks back. This is Bill’s recipe and I have played around with it twice. (Hey Bill, is there really such a thing as a 1/6 cup?!) This time I added a tablespoon of cocoa powder (to help along the chocolate pudding taste!) and omitted the coconut and nuts on top. They were just fine, tasty and a lot less calories! 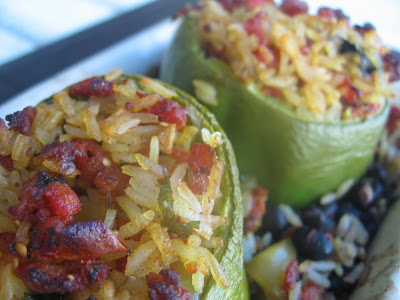 That left me with two small green peppers. I followed fellow CSA and blogger Caroline’s lead and decided to stuff them with sausage instead of the usual ground beef but instead of andouille, I made mine with a Latin twist and used Colombian chorizo. I cooked down the left over tomatillo/tomato salsa (from the mahi mahi) and chopped cilantro and added that to the rice mixture as well and stuffed the peppers. Afterward, I found I had just a bit of leftover black beans in the fridge and threw them into the rest of the rice for the bottom of the casserole. Pretty tasty stuff, (haha, get it, I said “stuff!” Sorry, La Diva is easily amused lately!) I even managed to eat the entire green pepper. (Naturally Nevah L8 left the shell! He just can’t be coaxed!)
I forgot all about my poor little baby bok choy but not to worry, the CSA mystery box for this week is a bit light after the frost so I’ll be using it at my first opportunity! 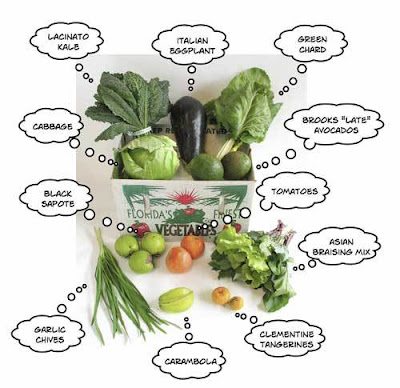 The lovely Marian took this photo, click on it to take you to her site!

La Diva doesn’t mind at all getting some produce that is not ripe yet as it gives me time to use the more delicate produce like greens or the chives. 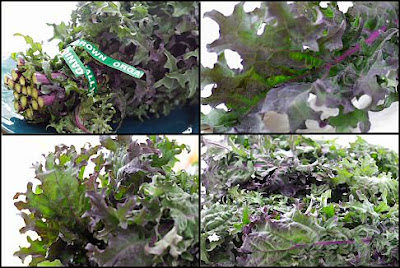 My kale looks more like this variety: Russian Red
Kale, kale, kale….I’ve heard you can fry kale….or I could try Shamu’s recipe of kale and cranberries and bacon.….but I’ve got a whole bunch so I’m sure I’ll eek out at least two meals of the kale! I might check the pantry, I think I have some white beans in there….a nice hearty cassoulet perhaps?
The garlic chives are going to be made into yummy Chinese dumplings or gao gee. Last season I took the recipe from Australian Gourmet Traveler and was very happy with the results. (though I want to work on my dipping sauce!) We don’t get the garlic chives too often so I’m not going to waste this opportunity and make the dumplings! 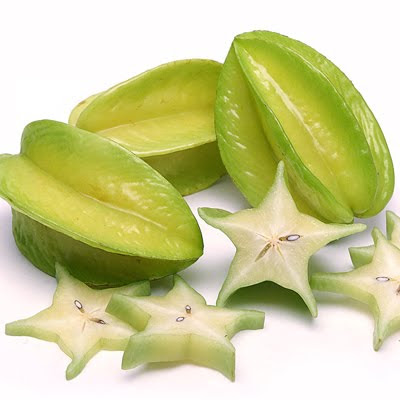 Carambola and the clementines will be eaten in one go. By the time I cut off the rot from the fruit, I’ll have about half left. However, I did come up with an idea for a salsa using the flowery, yet tart “star fruit” with pineapple, cucumber and basil…hmm…..
Cabbage again…..ooh, I’ve got an idea…..stuffed cabbages or Asian omelet this time? Not to worry, if I don’t use it this week, it will surely last at least two more!

Tomatoes, I can always use but I must admit to being challenged by the avocado. Yes, I use it as a butter substitute on bread or could put in a Mexican soup or the usual guacamole but…what about serving it as a mash with something else? hmmm…..In any case, it most likely won’t be ripe for at least four days, it’s as hard as a rock! Good, gives me time to think and research something new!

PS: I’ve gotten a “call back” from the Master Chef competition I auditioned for yesterday and am now going on to the next step. And guess what? I’m not allowed to talk about it to you or the press! But, I think I’m allowed to say if i got on the show or not! Stay tuned and wish a Diva luck! (I could really use a break in the New Year!)

You can read more about the upcoming show HERE.