Living in the seaside city of Sydney for a decade, I can’t tell you how many happy times I’ve sat on the beach or harbour enjoying a huge paper-wrapped parcel of steamy, crunchy fried fish and chips.   After a visit to the Kirribilli fish and chip shop, friends and I would walk down the cliff and  sit on the great expanse of lawn under the Harbour Bridge and watch life on Sydney Habour while we ate.  The smell emanating from the paper wrapping was heavenly, we could barely wait to rip open the paper and tuck into the fried mass of potatoes and fish, which was doused heavily in malt vinegar and salt.  As we crunched away with grease and salt on our fingers that we couldn’t help but lick, we watched the bustling of the working harbour, passenger ferries coming and going from Circular Quay, colorful sailboats racing by in the wind, cruising boats heading over for a dinner at Doyle’s Restaurant.  To the east stood the majestic Opera House and the shore between it and the Quay was lined with restaurants full of people all enjoying a meal on the water with spectacular views.  And yet for a fraction of the cost, we had the best seats in the house all for the price of a take-away fish dinner.

Fish and chips has got to be one of the most perfect combinations on the planet and I don’t think there is much you can do to make this simple and sublime meal any better.  So, for me, I was a bit stumped.  And then I decided to play around with Middle Eastern spices, specifically falafel mix.  What would it be like to use seasoned chick pea flour as a seasoning or batter for fish and chips?

I experimented with both shrimp and cod.  The first way I lightly floured and seasoned the filet and then made a batter with falafel mix, baking soda and beer.  The texture was very fine, lightly crunchy but the assertive spices and falafel seasonings didn’t come through very strongly and were quite subtle.

This time, I actually seasoned the fish and shrimp with the falafel mix and then dipped it in a standard flour beer batter.  I found the batter didn’t stick to the fish very well but in the end, it did taste wonderful.  The seasonings were flavorful and lemony and the crunch was right on target. 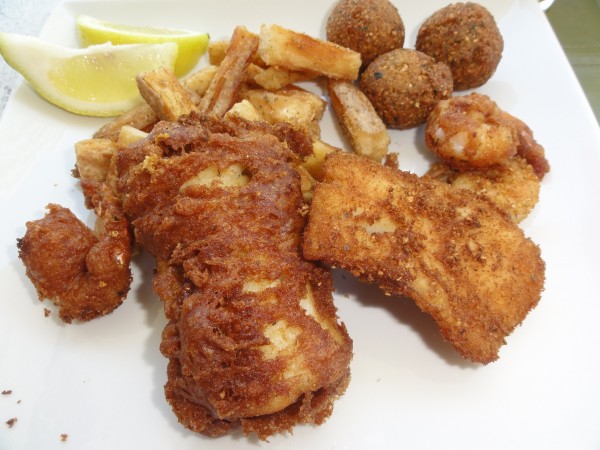 I served the two types of fish and shrimp with store-bought mayonnaise that I added lemon juice, zest and sumac along with fried falafel balls with a lemon yogurt tahini sauce and fried yucca that I seasoned with za’atar, a Middle Eastern seasoning mix with a base of ground dried thyme, oregano and marjoram.

Next time?  Simply season the flour and batter with the Middle Eastern seasonings and forgo the chick pea flour altogether.  I’ll be posting the link to all of the Creative Cooking Crew entries in a few days!